Following on from the first two rounds of ‘The One That Got Away’, CJ has been digging into the archives to bring us another round of previously unseen skate photography. Featuring Nick Remon, Sam Beckett, Joe Habgood, Dom Henry and many more…

Check out parts one and two for more unused radness.

There can be a multitude of reasons why great photos are never run and end up languishing on a hard drive somewhere. The primary reason for it is that the trick in question was never landed, closely followed by a swift change in sponsorship for the skater involved, thus rendering their heavily logo’d antics in the photo obsolete. In the case of the photos shown here however – neither one of those two cardinal sins apply. Every one of these tricks were fought and paid for, and ridden away from cleanly, but for whatever reason, still ended up in digital purgatory – so we thought we’d take an opportunity to air them for the first time. Enjoy…

All photography and captions by Chris Johnson

Nick is arguably one of the most naturally gifted skateboarders this publication has seen over our 20 plus year history. A little bit of down time between spots in Wakefield whilst wrapping up his Excursion video project with us back in 2013 and, having already kickflip manny’d a pavement to pavement gap in this ASDA carpark, he decided to throw a shopping trolley into the equation. He went on to shoot so many amazing street photos for his accompanying interview that this photo never made it any further than the darkest corners of my hard drive, until now. Shot during the latter stages of the 2015 Rollersnakes Summer Tour, when van driver and Nottingham based Eric Koston impersonator Bambi managed to get the van parked up long enough to join the session on the South Coast. The concrete on this slope had been purposely screeded to give grip to rubber tyres during soggy conditions, obviously this isn’t ideal for 31mm 101d urethane skateboard wheels…wallride nollie and an avoidance of a skin graft. On a freezing cold mission to wrap up Henry Fox’s First Light feature last year, Kris Vile and a few other Birmingham locals headed slightly south into the land of roundabouts; Redditch. This area of town and this bank in particular iare notorious in local skate folklore as the drinking establishment that lays just out of frame, The Woodrow, is just about the last place you’d want to end up. The bank itself is almost as rough at the pub…

As I was setting my flashes up, two dudes dressed like they were straight out of the Breaking Bad mobile home came out of that metal door behind Kris and I heard one of them mutter “well that’s all the blood cleaned up at least”. Right, get it landed and we can get the fuck outta here! Another overly productive UK dude who always has a ton of spare photos on file. 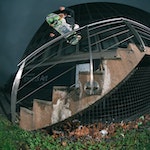 Will Lowe – front board, Wolverhampton, 2017

It’s no secret that the long, damp winters in the UK make street skating near enough impossible for several months each year. Will Lowe travelled from Stoke with Jordan Sharkey and the only dry ground in the whole of Wolverhampton town centre was the slabs outside of this college. Zero run up and zero run out, but Will got his photo – props!

Puttin’ the G in OG, Joe Habgood has been a magazine stalwart since his youth with everything from his iconic RAD Magazine cover right through his various Sidewalk covers and contribution as our very own Bear (answering reader’s letters whilst we were still a printed medium). I spent a few days in a van with the travelling Santa Cruz Skateboards team whilst they were in the UK, popping into the Shiner HQ (distributors of Santa Cruz in the UK and Europe) to pick up some of the latest product and stretch their legs before the Bath demo. Always keen for a quick ‘skate break’ from his day to day job at Shiner, Joe got stuck into the session on the main transition at the TF. Good to see you shred mate, true legend!

Arrrgh yes, the ever-recognisable yellow edging and ever awful tarmac of Worcester’s Pitchcroft Racecourse stairs. They’ve had the ass ripped out of them by many over the years but still offer one of the only bust free places to try and shoot a photo locally for me. On this particular day I needed Jordan to keep popping ollies down the set, with me shooting various different set ups and settings to demonstrate the basics of skateboard photography for a ‘how to’ guide I was working on. At the end of the session he threw a lofty, colour co-ordinated switch heelflip just for the sake of doing so.

Yes, that’s a HUF X Wu Tang American Football jersey! My only real memories of this particular mission were that it was as hot as hell and the tarmac was like a lump of gritty cheese. In on the session was Lewis Threadgold, who landed a frontside nosegrind revert alongside Dom’s switch crook. I shot this during the Sidewalk X Monster Energy Concrete Dinosaurs; a trip which took us around some of the remaining 1970’s concrete skateparks of the UK. Livingston was our last and most productive stop of the week. Having been rained out on our first day and with threats of a further downpour in those clouds surrounding him, Sam Beckett got this indy fastplant to fakie shot before the heavens opened.

Hard-wearing, odour-resistant - what more do you want?

Raiders of the Lost Park 5 - The worst skatepark in the UK?

Raiders of the Lost Park 5 - The worst skatepark in the UK?