This rail has been the subject of many ‘what if…’ debates since Ben Grove first tried to tame the thing back in 2002, and it goes without saying that Manny Lopez has been firmly on the list of contenders for seeing this hugely sought after kinked beast through to its ultimate conclusion since his enthusiasm for generally ‘massive shit’ was first sprung upon the waiting British scene.

Well, as you might have already guessed, on the first full day of the trip, Manny casually made his way into south coast skate-lore as he ground through the thing like it was quite literally nothing, then rode off into some bemused Wednesday afternoon traffic.

Cue a random passer by stopping to enquire as to what we were up to:

“Is that lad going to rim that rail?”

“Here Rye, do you want to film this?”

“Oh shit, look at that! Actually, lets definitely film this one!”

It took John a few attempts to focus on the one thing he actually wanted to film when we arrived in Plymouth, but this awkward crook bonk number from the wall to pavement was the lucky lady he went all the way with.

Oh – believe it or not – now is probably the right time to tell you that “suck his dick” was actually the catchphrase for the trip.

Want to encourage someone to land their trick? You know what to shout at them.

God knows what the general public made of us. 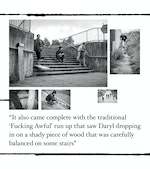 Daryl Dominguez – Ollie over and in, Southampton (or thereabouts).

Now, I’ve never seen this thing before. To the best of my memory, I think Daz came across it whilst watching a scene edit from the Southampton area, but the first time I laid eyes on it was when we arrived at the spot at 10am on a drizzly Wednesday morning. Truth be told, I don’t even know where this spot is if I wanted to go back to it, I just followed Bambi out of a nearby Travelodge carpark and the next thing we knew we were in a random town centre marvelling at this red-brick masterpiece.

It fully pissed it down twice whilst Daryl was trying to get this ollie, and you won’t be surprised to learn that it also came complete with the traditional ‘Fucking Awful’ run up that saw Daryl dropping in on a shady piece of wood that was carefully balanced on some stairs slightly out of shot here.

Equally as out of shot is the shrubbery Double D had waiting for him in his immediate ride out.

Safe to say the Southampton stars weren’t really aligned for this one, but as we were already chancing it with the weather, Daryl kept the messing about to a minimum and put this one to bed a good few times between downpours. You can see from the photo that this Plymouth bank is massive and steep, and to ollie out in such a manner to frontside wallride is pretty much ridiculous. What you can’t get from this photo is that we’d only left the neighbouring Wetherspoons about 15 minutes before, having started the day off right with a round of breakfasts.

…and a pint or two for John.

I’d have signed myself off for the day if I had started out with this madness.

Luckily for you lot, Manny and I aren’t the same person. He grinds kinked handrails and fires himself out of 45-degree brick banks for a laugh. I, on the other hand, don’t.

I’m not sure what to say about this one apart from the fact that it was the warm up for the 5050 that you’re no doubt going to be gawping at a little further in the article.

Daryl did the previously discussed ollie over the rail then we all packed up thinking we were on to the next spot, but no…Nick, Clev and Manny decided to reignite the session and take a different route to photographic glory, by going up the bastard and stalling the rail at the top.

I say stall, but Nick dusted off his 57mm softies from the Rollersnakes Highland mission a few months previous, tanked it at the bank like a full bore Amber Valley madman and actually ground this 5050. They don’t do half measures in Belper.

By the time this session ended, John was four cans of Thatchers cider deep and clocked out of the spot by trying to boardslide the kinked rail at the side, earning his chest a collision with the waiting floor for his troubles. 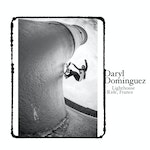 When was the last time you saw someone doing a wallride on a fucking lighthouse? Probably never, I’d imagine. Look at it – it’s well ‘Round the Twist’.

This gem came from Sirus’ vast arsenal of Sussex oddities, involved a half-mile trek down a skinny wall out to sea and was technically ‘in France’, as the French apparently own the structure it’s built on despite the fact it was firmly located in the English Channel. It’s definitely a random piece of terrain, and our presence there was obviously looked upon as being all the more random too, judging by the bemused looks on the faces of the fishing enthusiasts who had their usually peaceful Saturday morning angling session unapologetically interrupted by a dozen excited skateboarders.

The main bank we were there for you’ll be able to see elsewhere in this article, though the fact that the lighthouse was skateable was an added bonus. A few people hit up various carves on the thing, though it was Daryl who was singled out by CJ in order to handle the required photographic duty.

More impressive than the contorted body shapes on this frontside carve is the fact that Daryl backed this up by filming a two trick line that involved not one but two shove-it flips.

Mike York would even struggle to pull that one off.

It’s funny how quickly people settle into routines on skate trips; that seat in the van, who’s rooming with who, your particular combination of Meal Deal assets from Tesco…after the first day or so, things become set in social concrete.

On this trip, Sirus, Mark and myself were traveling independent to the rest of the crew, rolling along at our leisurely pace in a hire car, which went on to mean that the three of us wound up rooming together the entire trip too. So we existed in our own little microclimate outside of the bubble of confusion that was Bambi’s Wagon.

6 Music, Bob Dylan documentaries and a running commentary on literally everything and anything from Mark was all that kept us going. Morning, noon and night.

After this lighthouse session in France, we gave CJ a lift back to the main van and I think the sudden and drastic change in vehicle climate freaked him out a bit.

“Why don’t you stay in here with us for a while, have some time out from the van?”

This boosted and picturesque kickflip was sick too. Nice one Mark. You’re alright, you are.

“It’s a sick spot, though I’m not too sure what I can do here that would make a good photo…” pondered Clev.

“Why don’t you prop that drain up there and blast into the pipe?”

Right after this went down, Nick Roberts nearly ground the most insane double kinked handrail I’ve ever seen in my life. Seriously, this fucker was straight out of a rollerblading magazine from 2001 – 18 flat 18 or something along those sorts of lines.

Unfortunately a few tries in, Nick stuck at the top, fell backwards and bounced his head off the floor, continuing on the Rollersnakes Tour tradition that sees the lad getting worked trying to grind next level pedestrian stabilisers within the first handful of days.

Despite the knock to his noggin, Nick lived to fight another day and Clev’s ollie to pipe ride was fucking rad anyway. He even saw fit to do it in a line too. You know the Benny Hill song “Ernie”? The one that’s chorus goes, “Ernie, Ernie…he drives the fastest milk float in the west”?

Replace ‘Ernie’ for ‘Bambi’ and ‘milk float’ for ‘tour van’. That was something that myself, Mark and Sirus found our selves repeatedly laughing at over the course of the trip.

To begin with, the van came from a service station somewhere near Derby, looked like it should have been retired from active service about a decade ago, and I’ve got no idea how the hell Bambi got the speeds out of it that he did; the thing must have been rattling apart on the inside, piece by rusty piece.

Despite its shabby external appearance, Bambi had no bother getting the vehicle up to speeds that could only be described as ‘flying’. The sort of ‘flying’ that would find you in trouble with the speed-conscious law, no doubt.

We generally had trouble keeping up with the great off-white wonder, though spotting the beast was easy enough, especially if it was darting across three lanes of rush hour traffic on the motorway or making an impromptu duel carriageway U-turn after missing the turn off for the spot for the umpteenth time.

“Bambi, Bambi…he drives the fastest tour van in the West.”

I’m not sure how that little narrative detour relates to Nick’s sick corner carve to frontside pivot in Portsmouth but I’m sure it does somehow. This was my first trip with Clev, and due to the vehicular segregation of the tour, I didn’t actually get to spend that much time with him. What I did learn was that the lad fucking smashes anything with a transition, but I knew that before the trip anyway.

This spot has mad history – it’s one of the oldest surviving street spots in the country, and over the years has been sessioned by everybody from visiting US pros in the 1980s, Alan Rushbrooke and various other ATV shredders in the 1990s, with the likes of Doug McLaughlan making more recent impressions on the hallowed and increasingly uneven bricks.

Think you’re stoked on the execution of Clev’s indy grab here? Wait until you see the footage. He did it in a line that involved a fakie flip on flat.

Yep – Clev flips his board too. Didn’t expect that, did you?

That’s about all there is to say here – thanks to Daz and everyone at Rollersnakes for another productive and enjoyable mission. Now go watch the edits from the week!

‘Till next time fellas…