By this point you may be aware that a collection of the Santa Cruz team were in the UK a few weeks ago as part of their wider European Tour. With a heavy demo and signing schedule in hand, Tour Manager, filmer, Shiner Dist head honcho and Cider aficionado Alan Glass invited me along for the ride. Having shot the adidas Skate Copa Court event in East London earlier that day, I headed over to Stockwell on the Sunday afternoon to join the Tour. Here’s what went down over a busy three days traversing the motorway systems of the South (and South West) of England.

Photography and words by Chris Johnson Arriving to a heavy Stockwell presence around 5.30, the BBQ and the local’s session was already well and truly ‘lit’. Jake Snelling and Jono Coote were smashing every corner of the park, whilst Lois Pendlebury, who’s been on a hiatus from the UK scene for a little while, was layback grinding the shit out of everything fully clad in Yoga Mom gear.

Straight out of the van and staying well above the radar in a bright orange beanie, Tom Remillard wasted no time in freaking out pedestrians and worried motorists alike with a few of these Japan grabbed blasters out and over the wall. Wait, Helena Long’s on Santa Cruz? When did that happen? Whilst you were sleeping….

The good dudes at Shiner (the distributor of Santa Cruz in the UK and most of Europe) picked Helena up at the Girl Skate UK Jam in Leicester earlier this year and for any of you haven’t been paying attention, she fucking rips (she’s still the only UK female skateboarder to have had a published ‘street handrail’ photo). Tom Asta and the Stockwell locals looked on has she banged out a procession of backside pivot Indy grabs as the evening began to set in.

Around 7pm on the first day, (having set off from Worcestershire early that morning to get enough time at the Adidas event), my levels of concentration and blood sugar had begun to drop significantly. I found myself started to think, ‘who’s that random local dude on the fishtail board?’ until he started to send himself upside down on the tightest and smallest transition that Stockwell has to offer. ‘Shit! It’s Winkowski!’

I ran over to the middle of the park in enough time to just about focus my camera and pray that whatever setting it was on from the previous photo I’d shot would do the trick. I held down the trigger down at 12 frames per second in true ‘spray and pray’ paparazzi-twat fashion and thankfully the middle frame was solid and with some magic via the RAW file convertor, the photo was good to go! All the gear…. 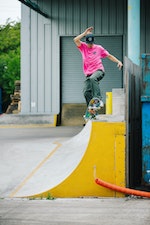 With the Stockwell demo wrapped up just before dark and a relatively early night behind us, we were up early and on the road out of South London towards the Shiner headquarters on the outskirts of Bristol. As we arrived, so did living legend Joe Habgood, along with the walking and talking embodiment of skateboarding that is Mr Simon Pegler or as most of you may know him @pigdog237. As the team refuelled via a heavy Domino’s Pizza delivery and restock of decks, clothes and everything in between, a session at the Shiner TF unfolded. Rocking the new Natas re-issue T-shirt in bright pink, (always help the photos pop!) Tom Remillard processed to backside smith grind and then mayday grind off the end of the ‘way harder to skate than it looks’ quarter pipe at the TF.

Having spent the past hour sessioning the sloping block with Tom Asta and Kevin Braun, Helena’s attention was now drawn to the aforementioned quarter pipe that Pigdog and Habgood were skating. Egged on by the traditional screams of ‘encouragement’ by Joe, Helena landed this blunt to backside disaster before we jumped into the van and headed to the demo at Bath skatepark. Undeterred by rush-hour traffic and managing to navigate the narrow streets of inner city Bath, we arrived at a jam-packed skatepark. Straight out of the gates, the demo was on!

The main focal points of the park for most people are the huge bowl and then the hubba and rail section in the far corner. Tom Asta unleashed an endless list of nollie and switch mind melters on the hubba over a 45-minute period. The pinnacle for the heavy crowd was this switch flip backside tailslide. Kevin Braun is a silent assassin. The dude has such a mild-mannered persona that lures you into a false sense of security until you get him to a demo….

Straight out of the van, first try backside tailslide down the rail before reeling off more tricks than I’m willing to relay. The highlight for me was this boardslide up, whilst fighting against the current of enthusiastic youth waiting to leap. 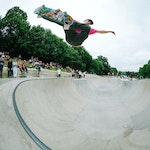 The powerful technology that a modern DSLR possesses ended up hiding the fact that it was almost dark (and Bath skatepark has no lights…) at the point when Tom was boosting huge frontside airs in the deep end of the bowl. Thank you once again for wearing that pink T Shirt mate! 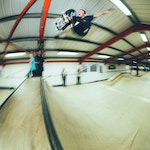 The one thing you count on with any UK Tour is that at some point it’s going to piss it down. There seems to be some kind of anti-skateboard demo microclimate that lingers near The Level in Brighton and is ready to strike the moment any renowned talent enters the city limits. Luckily Brighton has a back up plan in the form of a compact but rad skatepark on the top floor of The Brighton Youth Centre. Having deadened his legs at the previous demos and adopted a physio routine of ‘sitting in the back of a van with a bag on his lap’ for the entire day, Kieran fought the lactic acid and sent himself flying around every corner of park. He belted out a bunch of huge backside and then this frontside air as the heated session drew to a close. As the evening at The Brighton Youth Centre drew to a close and most people had retired to the van in search of as much water as they could force down their throats, Helena closed the demo off with a transfer from the street course into the mini ramp. Unknowingly, Helena took the MVP for the UK leg of the tour as she ended up shooting more photos than anyone else. Big up Helena! Keep your eyes on the @santacruzskateboards and @santacruzskateboardseu Instagram accounts for clips from the UK demos and further European segments of the tour.

WIN ALL THIS SANTA CRUZ GEAR

Including signed Santa Cruz deck, 2 Santa Cruz tees and Santa Cruz cap. All that you have to do is hit up @santacruzskateboardseu on Instagram give them a follow tag in a friend and also tag in #sidewalkcruzcomp and we will pick a winner. Good luck out there! 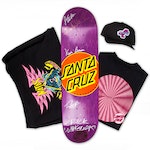 Raise your glass of Sam Smith's in the air...

Max Schaaf talks vert, Phelps and custom motorcycles at the House of Vans