Sessions started early on Saturday morning due to Vans booking all the teams into hotels, thus removing the nause up of having to doss down in a carpark and then attempting to perform after 40 minutes sleep, (oh the glory days of UK skateboarding), and ensuring that skaters traveled from all over the UK to get involved.
Traditionally, the atmosphere at Shop Riot events is electric, simply because to most skaters, their local skate shop means the world to them and because of this, everyone puts in 100% effort to rep, as opposed to the ‘too cool to try’ vibe that you occasionally encounter when there are only personal reputations on the line.

Everyone who turned up went in hard, with event regulars mixing it up with faces newer to the glorious North (“they’re really friendly oop North eh fam?”), and that, plus banging DJ sets, locally brewed ale on tap (thanks to Hull’s Atom Beers), and the friendly, welcoming vibe of Mark and all the Rockcity staff, guaranteed a good time for all who attended.

After the qualification rounds were through, nine UK shop teams went into the Semi-finals to battle for a place in the 3-team final. The top 9 consisted of: Division 24, The House, Fifty Fifty, Ideal, Slick Willies, Skate Pharmacy, Black Sheep, Rollersnakes and Skate Warehouse.
The cut for the finals was close with previous winners Black Sheep going up against Rollersnakes and Skate Warehouse in what turned out to be a really heavy final.
I think it’s fair to say that Skate Warehouse were on a mission, smashing it on both days, qualifying first in both the opening and semi-final rounds before eventually walking away with the top spot and £1500.
The sheer amount, and difficulty of, the tricks landed by the Skate Warehouse three man wrecking crew of Alex Decunha, Adam Keats and Aaron Jago ultimately proved to be unbeatable despite sterling runs from the other two teams, meaning a first win for Skate Warehouse, second place for Rollersnakes and a very respectable third for Shop Riot veterans Black Sheep.

All in all, an absolutely belting weekend of skateboarding, curry, laughter and grass roots representation of the UK skateboarding scene – if you missed out then more fool you.
Special mentions must also go out to the Welsh crews from Exist, Swansea and Freestyle, Newport who had an absolute nightmare with traffic, arrived 5 hours late covered in lager and hand drawn tattoos and proceeded to smash it without any warm up, whilst also reminding everyone present why our skate scene is so good.
Bravo and backslaps to Becky, Grace, Manhead, Jasper and all at Vans for putting their money and their hearts into supporting the UK skateboard scene in such an inclusive and relaxed manner. Also special mentions to Marc ‘TV’s Marc Churchill’ Churchill and the esteemed panel of judges for their bants, 80’s skateboard references and concentration (in that order).
Vans Shop Riot is a credit to you all!
You guys are shatter-proof rulers!

Full results can be seen on our Instagram @sidewalkmag 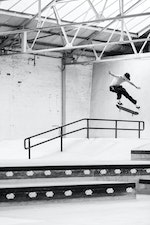 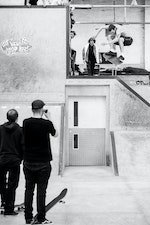 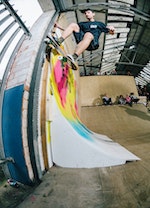