And we’re back with truly one of the most bizarre ‘skateparks’ that we’ve ever encountered.
Before we go on, due credit to the @suviveskateboarding Insta feed for giving us the precise location on this place that looks almost as if it was built just for a Raiders of the Lost Park episode. We had received a few pictures of this staggeringly odd Dagenham park before that but Suvive provided the exact location, so knucks to them.

“It’s a driveway Jim, but not as we know it…”
Skate obstacle or Junior Kickstart inspired trials motorbike platform? You decide.
Photo: Rich West

It’s a rare day indeed (especially in this country) that you stumble across a park containing obstacles that are not only objectively badly designed, but also that defy description, at least in terms familiar to most skateboarders. Whilst Parsloes skatepark does contain a few of the time honoured obstacles that you’d expect to encounter, namely a jump box and some flat bars, it was the other oddities that made everyone’s jaws drop on arrival.

However, as has no doubt become clear in previous episodes, the whole purpose of Raiders of the Lost Park is two-fold: firstly the Skateboard Urb Ex element offers us (and you) a chance to look into the recent past of UK skateboard provision and marvel at the numerous anomalies that litter the UK in numbers far exceeding that of any other country, and secondly, these missions to long forgotten skateparks also serve to reinforce the fact that, no matter how bad these places may seem, with the right people, you’re still guaranteed a good time.
We assembled an Essex-heavy crew (along with a few London-based heads), none of whom were even aware of the existence of Parsloes skatepark and the combined force of Nick Remon, Toby Gozzett, Taylor Jones, Jono Coote, Rich West, Mark Radden and Scott ‘Horsey’ Walker soon got busy, well as soon as the now customary gasps of disbelief and “How the fuck did you find this?” questions had abated.
Peep the clip below and then keep scrolling for some rad Rich West photos of both the lay out and some of the session.

Raiders of the Lost Park 8 – Parsloes skatepark, Dagenham
Music by Will Sheerin – more at Instagram @padsofhue

From chatting to a couple of local kids when we arrived, it seems as though Parsloes skatepark has been a fixture in Parsloes Park proper for some years with a more recent addition of some of the weirder obstacles happening back in 2017. The jumpbox and flat bars predate the rest of it apparently and to quote one of the locals, “I can’t even remember the last time I saw anyone skateboarding here.” Closely followed by the now ubiquitous, “Are you a YouTuber?” question obviously. Horsey braved the potential for finger-slicing with a blunt flip. Photo: Rich West

From what we can work out, the skatepark sits in what was once a paddling pool and thus the surface is far from smooth, further adding to the overall WTF? feel. 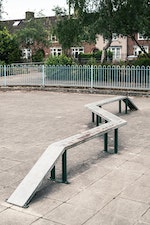 If you stumbled across this on the street you’d be buzzing, but in a skatepark?
Not even sure what to call this? ‘The Snake’? The ‘Wibbly Wobbly’? The ‘Maze Ledge’?
Photo: Rich West 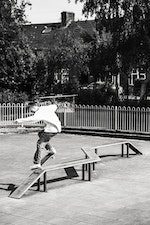 Toby Gozzett is the personification of the word ‘keen’. Nosegrind pop in on the Parsloes skatepark Maze Ledge. Photo: Rich West Another of the original Parsloes skatepark features. Not just 6 inches high, but also set at a right angle. Truly next level. Photo: Rich West And now, we move onto some of Parsloes’ newer and somewhat ‘unique’ features.
At first we all wondered whether the thing you can see above was actually a bike rack accidentally placed in the skatepark until one of the friendly lurkers corrected us by pointing out that, “It’s a slalom thing innit bruv?” It kinda makes sense I guess, well if you’re basing your skate facilities on 1976. One slalom run not enough for you? Don’t worry, you can practice your Salba wiggle on this one as well. Photo: Rich West

I don’t know what to say on this one really…kind of a ditch, sort of, if you squint hard enough. Photo: Rich West 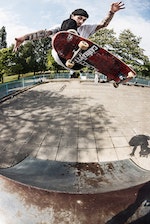 Taylor Jones took a hideous slam just before this frontside ollie, not as bad as Jono Coote’s but there are few human beings who can slam like Jono. Lofty frontside ollie to close things off.
Photo: Rich West

And there you have it. Another cracking day out at what ostensibly should’ve been a fun-hoover but turned out to be the exact opposite. If the clip and photos have piqued your interest then Parsloes skatepark is worth a look if you’re in the area. Contrary to the fairly grim Google returns for local news relating to the place, (‘body found in lake’ being just one example) we encountered nothing more than bemused friendliness from the locals and Parsloes Park itself is pretty scenic.

For footage and photos from previous outings – including a resurrection session at Sheffield’s Kelvin Bowl, an exploration of Milton Keynes Pennyland skatepark, Huddersfield’s most awful council parks with the Endemic Skateshop crew, and days out to Nunroyd skatepark and Tunstall skatepark near Stoke-on-Trent with the Welcome Skateshop squad and assorted friends – be sure to head on over to the Raiders of the Lost Park tag.

Nestled away in the foothills of Snowdonia, where scenery is plentiful but you would expect concrete to be scarce, there lurks a surprising amount of...

Tony Trujillo, jump ramps, Modelo and Tommy from The Stupids - a better than average Friday night!