Under the capable wings of the new TM, namely James ‘Griff’ Griffiths, the newly expanded Route One skate team recently set off to South Africa for a two-week trip taking in the sights and spots of Durban and Johannesburg, along with a day at Skateistan South Africa HQ situated in the CBD of Jo’burg.
Along for the ride were OG Route One riders Sam Beckett and Dylan Hughes, with the additional zest of newly added heads Daryl Dominguez and Jordan Thackeray thrown into the mix and Welsh lensman and with general ruler Nick ‘Nick the Bastard’ Richards on hand to film.
The article you can see here is the first of a two-parter with all photos by James Griffiths and the first of two edits by Nick Richards. As Griff put himself the day before leaving, “I’m not entirely sure what I’ve let myself in for here but hopefully it’ll all work out.”
Big knucks to all those involved for daring to think outside the ‘let’s go to MACBA’ box for once, and even more deserved knucks for planning a trip to Skateistan Johannesburg into the itinerary to give their vital work some more exposure. You can find out more regarding what went on there in Part 2 courtesy of Mr. Dominguez.
So for now – welcome to Route One presents Bourbon in Durban Part 1 – South Africa tour
Tour diary, all photos and captions by James Griffiths

Now, I’ve been on my fair share of skate trips, normally as the photographer and very occasionally as a skater but never under the coveted banner of TM.
Being a TM was something I had never really given any thought to previous to this trip. To be honest, I feel as though it’s not something that many people aspire to: unless I missed the times when people stood up at school and announced,
“When I grow up I want to be a TM”.
Honestly speaking I’m only really ‘a photographer’ because I had the realization that I was shit at skateboarding early on and figured that I needed to find another justification to get a space in the van.

The road to this trip that you’re looking at here all started last year when I got a call from Wes Morgan of Rock Solid informing me of a TM position going at Route One. As I live in Bristol, close to the office, and was quite active skating and shooting photos, he figured I could fit in well.
At first I was a bit dubious about it. I normally view a TM as playing a kind of ‘father figure’ role and anyone who knows me will be fully aware that that description is hardly apt as far as I’m concerned – I’m many things but ‘father figure’ certainly isn’t top of the list.

I figured I’d go to an interview anyhow, just to scope it all out, and before I knew it I was planning a skate trip to South Africa.
The planning of the trip was surprisingly easy with very few hiccups.
Well, aside from losing my Credit Card a few days before the trip and having to beg our filmer Nick the Bastard (who acted uncharacteristically unbastardly) to allow me to use his credit card for the holding fee on the rental van (thanks again Nick, you saved the trip!).
The first real TM challenge I had to face came via single serving bottles containing a various array of spirits that were complimentary on Emirates who we flew with. I was never one for maths in school, but the inevitable result of the following equation: Unlimited Free booze x 8 hour flight x confined space x skaters – isn’t a hard one to work out.
However that’s not a story for the Internet. We made it to South Africa and that’s all that matters.

I had pretty much resigned our first day in South Africa to the ‘write off’ category given the 30 hours of non-stop travel with very little sleep. I ought to have known better though, as almost as soon as we arrived at our first Air Bnb and made contact with our local guide Levi, the guys seemed pretty keen to head out just to have a ‘look around’.
My naivety kicked in and I thought this meant we would have a little drive around, take in a bit of the culture, grab some local food and maybe scout a few spots for later in the week. Because of this I figured I could get away without hauling my camera bag and tripod around with me and my little pocket rocket tourist camera would do just fine.
How wrong I was, because as soon as we stepped out of the car we were greeted by a perfect wallie between a young Nelson Mandela’s legs. Couldn’t have asked for a better start really.
Within minutes Dylan had already figured out a line and it didn’t take long until with had our first clip in the bag. Maybe I did know what I was doing after all? Sometimes on trips skaters get stuck into a pattern of always hitting the same kind of terrain – the tranny dudes want tranny, the ledge dudes want ledges, etc, etc.
If you look at the guys on this trip and then create a spectrum of skateboarding with street on one end and tranny on the other, I’d place Dylan as deep on the street end as possible, Daryl about a third of the way into street but also able to step to a ramp, Jordan would be a mirrored version of Daryl on the tranny side and Sam would represent deep tranny. Having this diversity of skateboarders was either going to be really good, or I was going to have a bunch of guys complaining and moping around as we haven’t been to their desired terrain in days. Fortunately for me, this cocktail of talents worked a treat.
Everyone got involved at whatever spot we were at, and everyone was stoked to see top notch skating on the other side of the spectrum from what they were used to.
The wallride nollie out above was situated halfway down a pretty sketchy hillbomb on the edge of a ghetto and was the start to our ‘GX1000’ Day.

When you’ve got as much board control as JThaxx has, nosebluntslides like this must feel amazing. Photo: James Griffiths

This is the monument spot we found in downtown Johannesburg: it became the closest thing we had to a central meeting plaza-spot throughout our whole trip. It consists of some pretty good flatground, some curved redbrick manual pads/seating area and this 3 block monument ledge right in the middle.
When we asked the local if ssbsts had been done I think he thought we were having a laugh with our strange English sense of humour. It became abruptly clear however that no, Dylan was not joking.
As this was only the second day of the trip I was getting more and more scared that I was going to lose Dylan, as some of the slams he took trying this looked pretty hairy to say the least.
A switch back tail is about as backside and blindside as you can get, mix that with the speed you need to send the length of the steps and the sharp edges that surround you and I was relieved to say the least when Dylan rolled away with only a cuts and bruises.
We were also quite time restricted on this spot. We arrived with only a few hours of daylight left, and our guide advised us sternly that Downtown Jo’Burg is not a place you want to get caught in when the lights go out.

After hearing about a ditch spot, we all figured we were going to the massive, super-gnarly spot that Grant Taylor and friends had destroyed in the P-Stone Thrasher South Africa tour.
However when we arrived we were greeted by a much smaller, user-friendly ditch with a bunch of rad DIY extras. In hindsight I’m very glad we came here as there were so many ways of skating this place and everyone managed to get a banging clip or two! It was really rad watching everyone skate the same obstacles but completely differently. 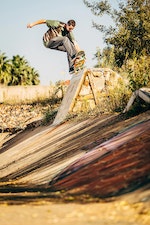 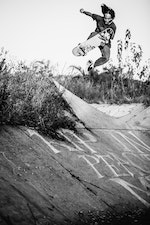 I see a lot of people using beanplants a bit of a cop-out trick these days, technically they’re not that hard to do and a lot of people half-arse them going at 3mph. Daryl does not do beanplants like this.
He does proper ones that are fast and fluid.
Here you can see him sending one over the hip at the start of very cutty line. 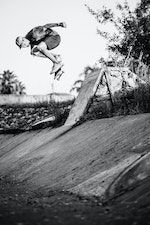 Dylan took the technical approach of flicking a precise backside flip out of the top bank and down into the lower levels. The catch on this one was heard by the guys standing 30 foot away.
It really was a thing of beauty.

Jordan decided to go full Sendy Lauper and take it frontside over the wall ride.
Everyone lost their shit when he did this, locals and tourists alike.
When the NBD hits hard. This was quite simply insane.

And that’s it for Route One presents Bourbon in Durban Part 1 – see you next week for the second part.
Thanks to all the SA locals who hooked us up, helped us out and shared their spots.

An extra special thanks to Nixon for their support of this project.

In Search of the Canna Ramp Part 4 - Newquay

The final day of trekking sees the crew land in Newquay

In Search of the Canna Ramp Part 4 - Newquay

The Search for the Canna Ramp continues - clocking mad miles

In Search of the Canna Ramp Part 2 - The Farm Bowl

Day 2 of In Search of the Canna Ramp - backyard gold!

In Search of the Canna Ramp Part 2 - The Farm Bowl

The road to Boardmasters with the cosmic crew