The obvious next destination on the list with a van full of the world’s best tranny rippers thirsty for vintage UK crete was Harrow skatepark AKA Harrow Solid Surf, (to give the place its original title).
Anyone with even the most passing interest in British skateboarding history should be more than aware of Harrow’s historical position as one of the UK’s most celebrated original era skateparks.
Originally conceived as an idea in 1976, (and allegedly funded in part by now defunct UK department store chain Woolworth’s), the park officially opened in 1978 with luminaries such as Tony Alva and Shogo Kubo turning up from across the Atlantic for the opening event.
Over the 80’s the park was repeatedly threatened with closure as skateboarding numbers dwindled and less savoury characters descended on the site, leading to elements of the park’s original layout being filled in for safety reasons, only to be dug out again by the stalwart locals.
Happily, after a proposed development that threatened the skatepark’s future in the mid 00’s failed to materialise, it looks as if Harrow’s future is secure, allowing it to reign supreme as the UK’s most heavily skated relic from the 1970’s golden era.
Anyhow – enough with the history lesson – if you want to know more, go watch the short Harrow Skatepark documentary on YouTube.

As far as our Concrete Dinosaurs Part 2 – Harrow Skatepark visit is concerned, despite the weather trying its upmost to screw us over, the rain held off long enough for the crew (with additional support from Alex Hallford and Sam Pulley) to dig deep after a strenuous day at Romford and still treat the rugged curves of Harrow to a few new delights.
Watch the clip, peep the photos and then go session Harrow for yourselves. 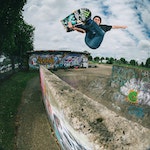 The powers that be might have silenced Big Ben in Westminster for the next four years, but over in Harrow for one day back in spring, he could be heard making all the noise. Never one to faff about, especially with the weather threatening to turn on us at any given moment, Big Ben got stuck into the halfpipe session straight out of the van and treated all onlookers to this properly boosted stalefish.

Sam’s CRV-WKD brethren were on hand for the days’ session, with Sam Pulley and Sox undertaking the 3 hours drive east from Newport to Harrow to put in a couple of hours shredding with the boys before being driven back to Wales by the shoddy weather. Under the watchful eye of the CRV, Sam pieced together a good few lines in the halfpipe across the course of the afternoon, blasting this backside air mid-session before venturing out into the rest of the park with Sox and Pulley firmly in tow for some off-piste concrete exploration. It goes without saying that Rune knows his way around a healthy looking Madonna, so you can imagine how hyped CJ was at the prospect of the Danish Destroyer hammering one home in the Harrow halfpipe. It took Rune a handful of goes to ride away from one he was happy with, and we all knew this was the one when we heard the authoritative ‘whack’ of the tail on the way back in. Raven’s legs were still recovering from his epic two-piece line battle at Romford a couple of days previous, though he still mustered up the energy to leave his mark on the hallowed concrete of Harrow, sandwiching himself perfectly between CJ’s lens and the gathering clouds with this timeless towering tailblock. This was the third full day of the Concrete Dinosaurs trip – the first was spent at Romford, the fruits of that session have already being unleashed in last month’s article, then the second was spent meandering around central London in the pouring rain as the British springtime took an inevitable turn the worst. This third day, set aside in the tour schedule to be spent entirely at Harrow, started out dry, but as soon as the session got underway, the clouds started to darken and, after confirmation from various weather focused apps, we knew we were on borrowed time.

Rune’s no stranger to the rugged concrete of Harrow, and he wasted no time in getting both his and CJ’s blood flowing with this classic frontside air. 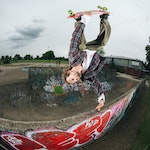 Alex and his steady band of merry men from Nottingham know how to bring the good vibes to a session, and for this session in particular, Alex also brought with him his vintage Steve Caballero set-up to make the halfpipe proceedings even more entertaining than usual. Alex chucked out a whole number of crowd pleasers on the oversized rig, closing the session with this daft handplant just before the heavens opened and ended our day for good.

It’s such a British trait to moan about the weather isn’t it? Well, when you have days like we had in Harrow, it’s hard to talk about anything else really. Sam was the only person who managed to film or shoot anything outside of the halfpipe because as soon as that session was winding down, the heavens opened. We were minutes away from getting a session going in the pool when the drops of rain started appearing, and the last thing that anyone needs to be doing is skating that typically slippery number in the wet. You’ll be in A&E faster than you can reply to CJ asking “do you fancy shooting something in here quickly?”. Luckily, just before we ran back to the van for cover, Sam was blasting around the rough-as-arseholes moguls (AKA ‘The Bollocks’), tweaking the hell out of this line starting method where everyone else was struggling to simply clear the distance.

This Hammers fan is allergic to mould, always late, and for some reason cannot burp. The kid lived in Spain for six months and didn't...

Where are they now? Off Radar with Scott Palmer

Where are they now? Off Radar with Scott Palmer

Rye Beres was on hand for the Australian, Swedish and Chinese legs of the Vans Park Series 2017 - here's the 'Rye's Remix' clip from...