Here’s Part 2 of James Griffiths perspective on the recent Route One ‘Bourbon in Durban’ – South Africa skate tour featuring a grip of insane transition spots and modern plaza bounty sure to tingle your skate tourist senses. As ever, the four man crew of Sam Beckett, Jordan Thackeray, Daryl Dominguez and Dylan Hughes took to everything they were confronted by with aplomb, the results of which you can see below in photographic and video formats. Keep your eyes peeled for an additional extra coming soon revolving around the time the crew spent at Skateistan Johannesburg – for now soak in the photos and footage and consider a trip to South Africa yourselves.

After a week in based in Johannesburg on a more street-orientated mission, we embarked on the 500 mile trip across the country to the surf capital of Durban. This meant good news for the more transition-minded members of our crew as Durban turned out to be a concrete surfer’s wet dream too, with multiple snake runs and the most legit backyard pool anyone could have dreamed of.
We did get a quick taste of Durban’s premier plaza spots too, but with tranny on tap here, ledges were definitely low on everyone’s agenda.

With that said, we hit up one final classic Johannesburg spot on the outskirts of the city before we headed cross-country and it turned out to be one of the highlights of the whole trip.
Germiston Snake Run sits between Rand Airport and Victoria Lake and is one of South Africa’s most famous skateparks. Once a staple of nearly all concrete park constructions, the ‘snake run’ is an endangered species these days (particularly in the UK) but, for whatever reason, South Africa seems to have them in droves. This particular one must be one of the biggest and longest in the world, starting at a couple of feet deep, winding around a S-shaped bend into a 8 foot deep bowl with a 9 foot extension.
Truly epic terrain.
It has to be said that, aside from modern plaza spots and a hell of a lot of amazing natural street terrain, South Africa is also heavy on the epic tranny too, both private and public.
As always, Nick Richards was on hand to document everything as you can see in Route One presents Bourbon in Durban Part 2 clip below.

My pre-trip research of South African spots threw up so many options but this snake run was a no-brainer from the second it popped up on my computer screen in Bristol. It was one of the spots that I was most hyped to go to because I knew Sam and Jordan would have a field day here.
We tried to visit it on our first proper day In Johannesburg and headed straight there after the jet lag had subsided, only to be confronted by a security guard bearing the bad news that the whole park was shut for an event. Horribly this event also managed to coincide perfectly with the days that we were to spend in Johannesburg and so, it appeared that just like that, months of dreaming about skating this epic snake run were to come to nothing. Fortune did decide to shine on us in the end though, (whilst simultaneously farting on us) as a situation involving a UPS fuck up meant we had to stay an extra day in Johannesburg. The stars aligned and we headed straight to the snake on our unexpected extra day and, just as I had imagined, Sam and Jordan laid waste to the snake run from head to toe. 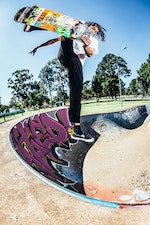 Jordan squeezes in a hyper-extended Madonna during a day of him going absolutely mental in this thing.
Photo: James Griffiths

Durban came through on the street front too, with this large plaza spot seeing a lot of attention from Dylan Hughes and Mr Dominguez. Considering that most of the street spots we had skated on the first part of the trip seemed to consist of all-too-familiar levels of crustiness, this stadium spot was the closest thing to a nice holiday plaza that we found. It consisted of all the staples you’d expect from a foreign plaza: perfect marble flatground spanning for what seemed like acres, perfect marble ledges, a sequence of stairs at varying heights and then a few more quirky obstacles, such as this gap over the rail into mellow bank.
It also came with a lovely backdrop to frame an equally lovely kick flip over the rail. All boxes ticked. Told you that South Africa was the land of snake runs didn’t I?
To get to this one you have to walk through Durban’s indoor mall and then head down what felt like a fire escape until you find yourself under the complex and surrounded by a waterpark.
The area around this snake run was filled with all manner of furniture that had seen better days.
Apparently the mall have been using this area as a dumping ground for some time, which was quite fortuitous for the local skate community as one man’s discarded junk made for some nice make-shift ledges and a communal seating area. The very same furniture dump also provided the perfect viewing area for the rest of us to just sit back and watch Sam effortlessly float over every hip one after another. 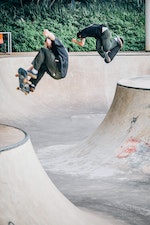 This pool was owned by a top bloke by the name of Bruce.
It was the first genuine backyard pool that most of the crew had ever been to and it was an absolute gem. It was also a proper ‘dog bowl’ complete with Bruce’s five dogs scarpering about and chasing people around the coping against a scenic view over the whole of Durban.
We arrived just as the sun was setting. The sunset was so beautiful that Sam and I had to work very fast to capture that last of the dying light. I think we got away with it. 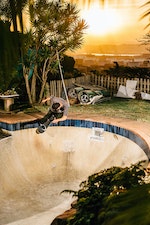 If you can think of a more scenic backside smith than this one, I’ll eat Bruce’s hat.
Photo: James Griffiths

Once again, a big thanks to all the SA locals who hooked us up, helped us out and shared their spots.
(Particularly you Bruce!)

An extra special thanks to Nixon for their support of this project.

The Forecast Scottish Summer Trip 2018 saw Tidy Mike and crew hitting the Livi Fun Day 2018 before hitting a number of spots around Glasgow.