Skateboarding’s current embrace of late 90’s fashion and aesthetics has found its front man in the shape of DGK and DC Shoes rider John Shanahan. As we’ve mentioned numerous times previously, John is not playing around as regards this current revivalist movement – exerting direct influence over DC’s output, designing a range of clothing harking back to the era in question and running his side project One Off John (@one_off_john on Instagram) whereby he modifies high end vintage sports wear and sells it on to haute couture fans across the States.
We caught up with him at the recent DC takes London event in Shoreditch to find out a little more…

All photos courtesy of DC. Cover photo above by David Manaud

“I’m about to kickflip this London Taxi yo!” Photo: David Manaud

Let’s start with the basics. How old are you, where are you from, and how did you first get into skating?

I’m 23, I was born in New Jersey, but I grew up in East Stroudsburg, Pennsylvania. I got into skating because one of my friends had a little fish board, he was playing with it in my drive, so I started jumping on it, taking turns, then from there asked my mum for a skateboard so she went to Walmart and got me one.

The guys were saying you’re from the Juggalo capital of America?

(Laughs), yeah it’s the Poconos in Pennsylvania, there’s mad Juggalos! I’m pretty sure it’s number two in America for Juggalos, there’s a shit load of them.

Who was your first skate hero?

What video would that have been?

Mindfield, I’d watch that video every day. Then I started going to New York City, which allowed me to really appreciate his footage, because he was just fucking New York up. All that just stuck with me.

What was your first skate video?

This is kinda random, but I think my mom got me ‘iThink’ – when I first started skating I bought a Think board and for some reason had decided that I was only going to buy Think boards.

You’ve been in the U.K. before, London for the Kalis Lite launch, and now Bristol too, have you had more of a chance to explore this time?

Yeah definitely got to see way more of London, that Kalis trip was really quick. We actually drove around this time, whereas before I think we were mostly skating around Soho. This time we had a car and drove all over, seen some mad spots.

What did you make of Lloyd’s in Bristol?

That place is sick, I wish I was feeling better, I was mad sore when we got there. We did a little demo, I just skated the jump ramp as I couldn’t really pop up the blocks. The ledges grind mad good though, that spot is really tight, I wish I’d got to properly skate it.

Yeah all the Palace dudes, Danny Wainwright, there’s got to be more I’m just having trouble remembering on the spot.

DC are bringing back a load of the legacy stuff, why do you think there’s a desire for that style again?

It gives older heads that feeling of when skating was the best for them, it helps to bring some of those people back to that time where skating was the most fun thing to do. Also it’s just a bit different, everyone looks the same out there with slim shoes sometimes. I’m not hating on that, I just think people want to see something else.

It makes sense, skateboarding is a ‘broad church’ right now, so it makes sense to have that appeal. I guess you’re not old enough to have rocked Droors the first time round?

What is it that you like about that era of skating?

It’s something I grew into, I like it because it seems like skating used to be far more style and art based, and less about athleticism and doing big shit. I feel like it seemed more original, people were doing it for the love and not because skateboarding was cool.

Can you talk a bit about your side project One Off John?

It’s a collection of clothes that I design and sew on this little machine at my house. I basically just collect all these different garments from all types of places – online, thrift stores and all that – then I just piece them together and sew them up, everything is one-of-one custom-made. It’s a lot of cargo pants and just wild shit.

Are you trying to recreate specific things inspired by clothes that you see, or just playing around?

It’s a little bit of both, I’m definitely inspired by other things, but it’s also random because of the clothes I find. I don’t really have too much of a plan with that, it kind of comes together as I go, which keeps it fun.

Who stands out as having the best fits in skateboarding?

Do you think that you and the Sabotage crew rocking the old DC’s had anything to do with them bringing back the bigger shoes?

Those dudes, that’s their shit, they made it relevant. They’ve just never stopped rocking that stuff. I think it probably had something to do with it, everyone who watched Sabotage videos can see the love for that shit, I think DC picked up on that, it just seems like perfect timing to bring that back.

You’ve just put out your own range with DC, what was the inspiration for that?

With the shoe colourway, I took inspiration from two shoes that I’ve had in the past. One was this Rob Dyrdek shoe that I got from eBay, the guy who I bought it off told me he’d got it Rob’s parents yard sale. It was a white patent leather shoe, kind of like an AirMax, no skate shoe is ever patent leather, you know the shiny shit? I thought it was mad funny, it was sick, I loved that shoe. I skated the shit out of it, it was mad good.
The second one was Stevie Williams second shoe for DC in white, red, and grey. I love that colourway, so I decided fuck it, I’m going to do white and red, it’s classic, with the patent leather though.
That’s kind of how the tracksuit came about, I made a spacesuit looking thing, with white and red to match the shoes. With that hat, it’s based off one I found in a thrift store which had the trimming on the peak, I’d wanted to make that hat for a while. 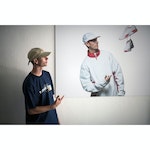 Are you going to be bummed when everyone starts wearing 90’s shit and it all gets blown out?

No, not at all. I mean if people start wearing that shit too much it will take away from it a little bit as everyone will start to look the same. I don’t know if it will get that crazy though, I’m just going to keep doing my thing.

Is there a Holy Grail piece of 90’s skate fashion that you’d really want to get your hands on?

Probably the Rick Howard shoes, the first and second ones he had on DC. Those are some of the best DC’s. Those ones are really sick.

Have you been filming with Austin much, I know you two linked up before?

Yeah he’s been showing us around every day. He’s been killing it in that regard, he takes us to cool spots, we’ve not been going to the same spots that everyone goes to when they come here. I love filming with him, he’s always got good vibes, he’s always down to skate, even if we’ve been skating all day he’s down to go out at night. He’s tight. 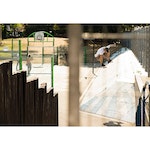 We kind of touched on this earlier, DC are catering to a wide range of skateboarding styles, you can see that in Street Sweeper, do you think skateboarding needs to be reminded of its roots so as not to kook itself out?

Yeah definitely, I mean the thing with Street Sweeper is that it’s mad diverse. It’s not just all people into 90’s or 2000’s skating, you’ve got guys like John Gardner doing all those crazy things, he’s the best! It’s doesn’t have to be one way you know, you can draw inspiration from anywhere and make something cool out of it.

Do you think kids are going to be able to get used to the bigger puffier shoes?

I think it’s psychological, once you try, you realise that you can do it. I feel like people are just scared to try, but once they do they’ll realise they can, I mean you see people doing shit in Timbs!
You can still feel the board in big shoes, you break them in and they’re still tight to your foot. Personally I think it’s better for your health, the whole reason I started wearing them was because my feet were hurting from pushing. I could feel the ground every time I pushed, on the ball of my toe, so I thought ‘my feet are killing me I’m going to get some puffy DCs’. My feet feel great now.

Do you have any predictions for the next big trend in skateboarding?

That’s a good question, I mean I can see the direction it’s going in…

Is it good or bad? The way you see it going?