This weekend saw 100% skater-owned and operated Endemic Skatestore in Huddersfield celebrate their 11th birthday.
A day may well be a long time politics but 11 years in retail, particularly in skate retail, is an achievement more than worth celebrating. At this point, it seems fitting to pass the mic over to Endemic owner, skateboarder and general good egg Andy Wood to give a little background on the weekend’s goings on.

“Whilst this year’s celebration were a little more low key than last year’s Endemic 10 year anniversary, we still wanted to throw a party and concetrate on what really matters, namely, spending the weekend with our friends and family who have supported us since the beginning and allow Endemic to be what it is.

We had a little in-store premiere on Saturday night followed by curry and beers with the whole crew.
On the Sunday we reconvened and held a skate jam at Newsome Skatepark sponsored by Vans, adidas, Shiner, Stance, Rock Solid and Keen.
Newsome was chosen as the venue because it’s got some pretty serious obstacles (i.e. the double set) plus the fact that it’s secluded so we can get away without gaining permission from the local council.
As usual things got rowdy and everyone skated really well. The locals always surprise me when we do a best trick down the double set here and this year saw more NBD action than ever before.

Additionally, shop family member Nathan Page has been filming an edit for the last couple of months featuring the Endemic shop team and family – Fred Halsey, Josh Whitehead, George Sinclair, Kieran McDonnell, Ben Raynor, Jude Matthews, Myles Midgley, Felix, Aston Collins, Callum Benson, Ty and Jack Iveson. You can peep that below, along with a bunch of Tim Smith’s photos from the weekend.
We would like to thank everyone who has supported Endemic Skatestore in whatever way over the last eleven years – you are all rulers. Thank you.”
All photos by Tim Smith. 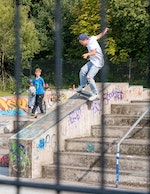