Fix Up 2017 Bristol Skateboard video contest
The top 5 winning edits, plus photos and the edit containing the best trick of the weekend.

Mario frontside flipping around Lloyds, Ali G throwing himself over the First Light rail and two Miami cops on their vacation hard flipping GWR? That can only mean one thing: The Fix Up 2017 competition has returned to Bristol for its third year running. With Monster & DC chucking in quite a healthy prize purse this time around, 2017 saw the most heated 3 days of filming Fix Up has seen to date!

For those unfamiliar with Fix Up, allow me to me enlighten you:
Basically, it’s Bristol’s answer to the All City Showdown style of competition.
14 teams go head to head for 3 days straight in order to make an edit that will be judged on creativity, spot selection and of course, skating. It started on Thursday 31st August 3PM in Fifty Fifty and concluded at 3PM on Sunday September 3rd at the Campus Pool indoor skatepark.
All the edits are then premiered and the teams themselves get to judge one another, alongside the obligatory piss up. With some teams coming from as far as Stoke, Sheffield and York to compete this year, there was definitely some heavy competition and people going all out against the clock, security and the frailty of the human body to get the best footage they could.

We live in a time were deadlines for videos are constantly getting pushed back and nothing ever seems to come out on time. Considering that, and how bad skateboarders are at generally organising themselves, the fact that 14 different groups of skaters all managed to film rad edits and get them all to the same place on time isn’t anything short of a miracle. Well, a miracle mixed with the continuing hard work of all involved, especially Dan Higginson, the founder of Fix Up. Dan I think we all owe you a pint or two, Thank you!

Anyhow, you can see the top five edits in descending order below, along with photos from the weekend shot by James Griffiths. Below are the final rankings, along with the winners of Best Trick, Best Dean Lane Trick, Best Daveside Trick, Best Instagram clip and Best Fancy Dress. Massive respect to all those involved in this – another fantastic Fix Up event.
The other 9 Fix Up 2017 edits can be found here. 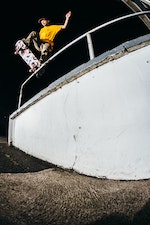 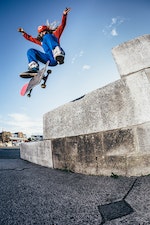 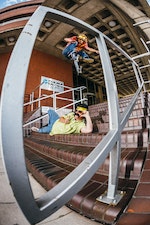 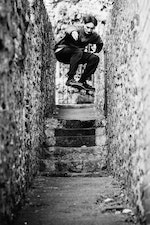 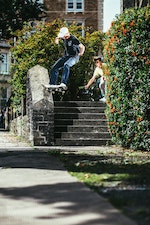 Tackling the concrete of London with Ben Raemers for Kingpin's 100th issue.

The Volcom team passed through the UK this the summer, stopping in Bristol for a Campus Pool Lock in on the way. This short edit...