In the late 1960s “Dogtown” was the name for the not-so-sunny side of Santa Monica and from it, in the 1970s, a new lifestyle and culture emerged where surfers transitioned from the waves to the pavement using skateboards and laid the foundations for the global culture that followed in Dogtown’s wake.
The Dogtown cross logo, originally designed by artist CR Stecyk III, gained notoriety after being published in Skateboarder Magazine in 1975, and was printed on decks, wheels and shirts a few years later.

Diamond Supply Co. x Dogtown Capsule embraces the imagery and iconography of both the foundational Dogtown era and its 1980’s manifestation which laid the groundwork for the developing form of street skating with epic sessions taking place on the Venice Beach boardwalk that stand today as an exploration of the possibilities of skateboarding’s future, long before it existed.

The crucible that is Venice beach is celebrated and referenced in the release video below, filmed on location on the Venice boardwalk and featuring, amongst others, Shota Kubo, son of founding Z-Boys team rider Shogo Kubo.

Californian pioneer Jim Muir, an original member of Santa Monica skate team the Z-Boys during the 1970s, and founder of the Dogtown skateboard brand in the 1980’s, was central in re-imagining what was possible on a board at a time when the scene was very much in development.

“Skateboarding was totally underground when we started riding, our style was completely based on the surf scene; in Hawaii you had people like Larry Bertlemann, Mark Liddell and Montgomery “Buttons” Kaluhiokalani doing innovative things with low to the ground moves and we tried to emulate that.”

After switching traditional clay wheels for urethane versions, the Z-Boys found new horizons for their direct, dynamic style during the droughts in the late 1970s, taking advantage of the LA’s empty swimming pools to develop the self-expression and personality that has defined skateboarding ever since.

Muir went on to launch Dogtown Skateboards in the 1980s, which – characterised by handmade boards and punchy visuals – has had a permanent impact on skate culture. Inspired by everything from street gangs to LA’s multiculturalism, Dogtown’s full-colour graphics became the new norm and saw the introduction of the brand’s instantly recognisable cross logo. ‘We took many different influences and produced individualised artwork on boards that catered to each rider’s taste,’ says Muir. ‘These designs are iconic because they’re unique to the style and energy of skateboarding.’ To this day, the Z-Boys’ legacy remains, as immortalised in Stacy Peralta’s 2001 documentary ‘Dogtown and Z- Boys’. “We put a stamp on all aspects of skateboarding – style, attitude and aggression,” says Muir, who claims that although the scene’s moved on since the 1970s, in many ways it has remained the same.
“Skateboarding has always been an individualised outlaw activity and there’s always going to be someone adding something new or putting a twist on something that came before.”

On the Dogtown collaboration with Diamond Supply Co, Muir says he sees a natural fit between two skateboarding titans.

“When I was first approached, I immediately saw the Diamond logo in the middle of our cross,” he says on a capsule collection that drops on September 2. “I’ve known the Tershays for a long time and I’m stoked that we’re about to put this out there – it really reflects both brand’s visions.”

The iconic Dogtown Skateboards cross logo gets the Diamond Supply Co. treatment, merchandised onto caps, a deck, a hoodie, a coaches jacket and short and long sleeve tees. References of the classic 1980s skate aesthetic can be seen with the photo tee and the back graphic of the long sleeve tee.
The full Diamond Supply Co. x Dogtown Capsule can be seen over at the Diamond site. 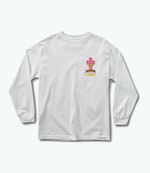 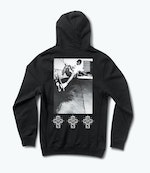 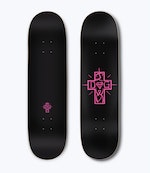 Tackling the concrete of London with Ben Raemers for Kingpin's 100th issue.

Another ten choice Sidewalk photo memories from the archives