With the announcement last week that Bolton-born nutter Eddie Belvedere had joined the venerable Death Skateboards skateboard brand team, we figured that it made sense to dip into the recent (ish) past for today’s Sunday Service. Eddie Belvedere has been on the scene for a long, long time: from a tiny, stoned sprog flinging himself off everything in sight at the infamous Bolton Bones indoor skatepark, through to stints on Karma, The Harmony and Superdead Skateboards – Eddie has been producing high speed skateboarding for going on for two decades now.
This clip was initially released with little fanfare but, looking back on it, could there be a better combo than Eddie and The Fall‘s ‘Totally Wired’?

With a unique style probably best described as a combination of Buddhist monk on Buckfast meets angry hobbit – Eddie came out swinging and has never really slowed down. After a few years studying and living in Cornwall, Eddie recently relocated to his adopted hometown of Manchester taking up the mantel of Black Sheep Store‘s customer facing shop manager in the wake of fellow Black Sheep head Nick Stansfield’s move to London to work in the Palace store.

Always a favourite of ours, both on the board and in the pub, over the years we’ve spent a lot of quality time with this lunatic, whether that be him collapsing and breaking full-size kitchen tables in half with his head in Valencia, staying up for 3 days on end and still coming through with the goods on various Big Push edits, or teaming up with soul mate Fred Gall on UK iPath missions and mixing the twin disciplines of sponsored skateboarding and extreme red wine consumption with a level of natural ability rarely seen elsewhere: Eddie is the boy.

So without further ado – here’s Eddie’s 2016 ‘Wired’ section, filmed in both Cornwall and Manchester primarily by Adam Salais and released by long-time sponsors and now employers Black Sheep. For more on Eddie’s relationship with the inimitable Fred Gall – head here to remind yourselves of some of the amusing situations that he gets himself into via a re-read of his Word Interview.

Anyway – dive in and enjoy this week’s Sunday Service – Eddie Belvedere ‘Wired’ (2016)
All photos by Leo Sharp unless stated. If you missed it last week – here’s a reminder of the welcome video for the Eddie Belvedere on Death Skateboards announcement. Get prepared for a full part from this maniac in Death’s upcoming full-length video ‘Into the Void’ due to drop in Spring.

We’d also be remiss if we didn’t post up these two archive bangers up too from Eddie’s time as a member of the UK iPath footwear crew.
Fred Gall and Eddie – a match made in heaven (or hell if you’re Tez). 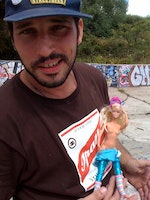 And the iPath Big Push edit from 2010

An absolute UK skateboarding goldmine for your Sunday

Expect lukewarm Holsten Pil's fueled, raw skateboarding from the concrete of London and beyond...

Callun Loomes and his indefatigable band of nutters.

Blackburn's Junction 4 gets a heavy session from Eddie and co