Following on from the first three rounds of ‘The One That Got Away’, CJ has been digging into the archives to bring us another round of previously unseen skate photography. Featuring Jess Young, Ben Hatchell, Charlie Munro, Horsey and many more…

There can be a multitude of reasons why great photos are never run and end up languishing on a hard drive somewhere. The primary reason for it is that the trick in question was never landed, closely followed by a swift change in sponsorship for the skater involved, thus rendering their heavily logo’d antics in the photo obsolete. In the case of the photos shown here however – neither one of those two cardinal sins apply. Every one of these tricks were fought and paid for, and ridden away from cleanly, but for whatever reason, still ended up in digital purgatory – so we thought we’d take an opportunity to air them for the first time. Enjoy…

All photography and captions by Chris Johnson

During his tenure riding for A Third Foot, Coleman would often be up in Worcestershire on a session with the likes of Luke Kindon and Ryan Price – those were the days, etc etc. My vague and selective memory is pretty loose on this one but I’m sure the run up was as rough as they come and he was skating into gale force head winds.

Did you see Josh Arnott’s Haunts? If so, you’ll recognise this rail. Having had our ears chewed off by the owner of the hair salon next to the rail, we were keen to get the fuck out of there as soon as Arnott got his front board landed. At this point Jess showed up and prolonged Sweeney Todd’s trauma and, with the rain now well and truly unleashed, he landed this kickflip. Sorry for cutting your hair off, maybe it was karma.

This one’s taken from a day of looking for something to do in a sodden London. Having had a successful and sun drenched first day of our Sidewalk X Monster Energy Concrete Dinosaurs at Romford the previous day, our plans for Harrow were well and truly rained off. We spent half an hour at the House of Vans where Ben wasted no time at all in adding to the long list of crazy things to get done in that bowl. Ollie up to frontside wallride without grabbing your way back in on a vaulted ceiling? Yep!

Shot during a mission into the seemingly uncharted Derbyshire territories whilst working on Adam Gaucher’s First Light feature, which Nick Roberts tagged along with early one Sunday morning in June. No stranger to rough concrete and embankments as he was a key player in our journey into The Scottish Highlands with Rollersnakes in 2015, Nick forgot one key element to the session; some soft wheels… He battled this for a while as the (relatively) short run up and ‘rough as arseholes’ concrete perpetually did his head in. He got there in the end though. 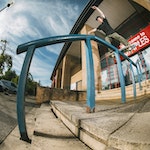 By this point in our journey, you’ll probably be thinking “why the fuck didn’t half of these photos get run?” In this case, Charlie one upped this kinked boardslide a few weeks later with the mammoth Hitching double kink as seen in Sidewalk Issue 228’s Witness feature.

Being a working skateboard photographer is like being a professional blagger. The success of my journey to A, B or C is widely dependant on local knowledge and relying on people who’ll let you stay at their house. Horsey is that dude! Always up for letting you take over his living room floor for days on end, willing to book days off work in order to help hook the session up and, let’s not forget, shredding the fuck out of whatever we end up skating that day. This wallie was shot on a boiling hot Thursday in 2016 whilst waiting for Jordan Thackeray to get to the spot and finish his Haunts. Nice one Horsey!

Shot during the final few days of the Fabric Lake District (and North East) jaunt when, as happens at some point on all UK skate trips, it was about to rain. This photo, like everything else Manny shot that week, didn’t make it into the mag feature as he left the team a week before it went online. I was gutted as he’d shot some truly amazing shit that week. This is one of my favourites from our time on the outskirts of Newcastle.

Casper Brooker and his massive body.

A brief history of Nottingham's DIY Skateboard scene from the inside.