Connor North had to work for some of the time the trip was planned so he was limited to just a few days to try and shoot photos and film. Connor lives in Whitley Bay and this quirky ‘spot’ happened to be nearby; he’d been eyeing it up for a while as a potential photo opportunity. Typical seafront digs getting a sick frontside nosegrind. 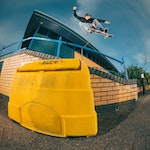 We made a point of filming the dog egg roll up that you can’t see in this photo. It was so shitty; just random bits and pieces of found debris stuck together to make something resembling a smooth roll up. It also has blind bumps so it needed something in order for James to get across, but I’m not sure how much easier this made it. As you can see the Bushinator dealt with it as he does and added some back foot action to this mighty pop shove-it. Good work James.

I’ll dig out the roll up footage at some point…Stinkos.

This spot is a lot worse than it looks. It’s pretty stinking to be honest, Jason stepped up and was the only one who could be bothered skating it. We hung around like a bunch of reprobates until the offices finally closed and the suited and booted buggered off to Weatherspoons for the evening. It was nice and warm so we were happy enough lounging about taking in the views. As Jason got to work the cleaning ladies didn’t seem too fussed and just let us get on with it, which is always a bonus. I’ll be honest, I was struggling with this. What you see is a dope bank spot somewhere in the outskirts of Whitehaven which was kind of hard to skate as it’s pretty tight and narrow. It was getting dark and the brickweave was tiring and a pain to deal with. This switch front shove took a while to finally nail, stoked with the shot though!

I was really stoked that Will did this. It was starting to rain and we were on our way to get back to nature with a freezing cold swim in a proper lake. Will started flinging his board over the grid but it was getting fairly slippery. This thing is huge too and obviously full of danger. He took some good slams but got there after a little while. Very picturesque ollie with legitimate ‘TEK CARE LAMBS ONT ROAD’ sign. Look at that scenery!!!

Ah, MVP Bush. James constantly kills it. It’s all too easy for him. This was actually our favourite Bush trick from the vast amount that he put down during the trip. This is not so typical a Bush spot too, so it kind of stood out. We stumbled upon this spot by accident as it was just up the street from another spot we were skating. The bike chained to it made it even more of a challenge for ‘The Bush’ to kickflip, but as per usual, ‘nailed’. Plus any photo with Poundstretcher BGPs is an instant winner. Jason’s clearly got his best jean jacket on for a session at this ridiculously good spot in the middle of nowhere, Whitehaven. I know there’s some people out there who would love to skate this spot and it’s probably worth the visit if you can a. skate this kind of thing and b. find the bloody thing. That’s the best thing about jumping in a vehicle and hitting the road, you never know what you are gonna stumble upon. This thing looked like fun, if you have a set of those tight tranny legs.

I took the easy way out with this one.

Switch 180 with a belter of a backdrop.

This was the first trip that Will had been on with us, which meant he was a little nervous in the beginning I think with new people to get to know, plus kipping on a campsite means very little personal space, but he buckled down and got on with things like the rest of us. This was a sick makeshift spot that we came up with. Backside nosegrind for the lads, done with steez.

This is a sick spot in Cockermouth. It was Brexit month and the pub across the road had some definite Brexit folk stood outside. We went there twice – once before and once after the vote. This was the first time we went and it was pretty mellow, the next time we went a bunch of fat fucks stood outside the pub started giving us shit, “we pay our taxes” etc, etc. Catch me if you can fatty. Back lip pre-Brexit.

As the sun shone down on us James Bush continued his 2016 onslaught as he perfectly spun a switch backside 360 at our Whitley Bay stop. Perfect form James!

Another dope spot in Whitehaven that’s probably just skated as regular ledges or a ledge to manny type deal. Will can definitely ollie however, so he took care of the thing that all of us wanted to do but couldn’t. Pop up and pop the bin! Will definitely has them snaps.

I think this was on the same day that we saw a pregnant Gypsy taking her horse for a walk by the local Asda. It was random; the circus was in town. This one was a pretty rugged spot as it was, without having to land in the dirt and stone bank as well, or factor in the wind, which was blowing pretty hard. Jason stepped up regardless.