Starting skateboarding can be intimidating for anyone…

Showing up at a skatepark and instantly going to the quietest area of flat ground, being ultra aware of everyone checking out your inch high ollies, making sure to try harder tricks and then acting annoyed to make it look like you usually land them….. Yeah, we all know the score.

Now try that, but in a wheelchair.

Lily Rice, a 14 year old from South Wales, has broken down all of those barriers.
Born with a disabling condition, Lily has overcome massive adversity to still live out her dream of being part of the skate community. After finding WCMX, (that’s ‘Wheelchair MX’ as in ‘BMX’ or ‘Skateboarding for wheelchair users’ to use the other popular explanation) at the age of 13, Lily has fast become one of the UK’s top Para-Athletes, and having just proved herself at the Adaptive Skate World Champions in California, Lily is only going to get stronger and better.
Interview & all photos by Peter Pickford 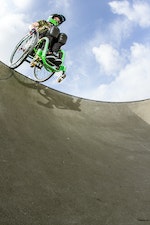 So, I got into WCMX about a year ago. When I was younger I would come up to the skatepark with my Dad and just try to roll around on my board. I was born with my condition, but it worsened as I got older, so it meant I couldn’t continue to skate.

I saw a YouTube video of Aaron ‘Wheelz’ Fotheringham riding Bob Burnquist’s Dreamland in a wheelchair and I thought, that is so cool, I want to do that!
I met Wheelz when he toured the UK with Nitro Circus, we stayed in touch and he donated me one of his old chairs, the moment I got it, I never looked back.

I knew of the World Championships, I had watched them in Texas last year, and from seeing that I just wanted to go. My Dad told me, if you stick at it we’ll go next year, but I didn’t really believe him.
Finding out that I had gained entry was incredible and the fact that it had moved to California this year was just as exciting.

Tell us a bit about California, it looked like an amazing event and location.

California was such a great opportunity for me. I got to meet and make friends with riders from all over the world. I had a couple of training sessions at Venice Beach before going to the contest venue in Fontana. The skatepark there is different to the parks in the UK because it’s totally accessible for people in wheel chairs. There are parts in all the ramps that allow you to power out of the bowls. In the womens event there was two previous world champs and a local girl who shreds called Alyssa Montenegro. The heat got to me a bit, but I did good enough to make the finals. In the finals I was so happy! I didn’t fault on either of my runs. My goal was to get top 5 and I never really expected to get second. Totally stoked!!!

So how long did it take for you to get comfortable with riding in a skatepark?

So I built up from Pembroke skatepark, which is a really small park, and once I had dropped from all the ramps there, I would come up to this skatepark really early in the morning so that there was no one else around. After time I got more confident about riding around others, and now I’m just family at the skatepark with everyone else who skates.

When I used to show up to the park I would get everyone just stopping and watching me, like, ‘What’s a wheelchair doing in the park?’, but now they’re like, ‘it’s just Lily!’ visiting other skateparks.

Have you been able to travel much with WCMX so far?

So, apart from California, I went to Copenhagen a few months back and rode in a WCMX event called the Toyota Wheels Park Project. It was amazing, I got to meet loads of other riders from all over the world. Otherwise, I’m always travelling around the UK visiting other skateparks.

A big aspect of skateboarding is making video edits, have you had much chance to film anything?

I’ve done a few videos, one video got shared a lot last year and ended up getting over 2 million views which was mind blowing! I just like to post videos up on my Instagram, but I want to start filming a street edit now I’m back from California.

What would you say to anyone who is effected by a disability and is wanting to get into WCMX?

Just don’t let anything stop you. Work your way up from the smaller stuff and don’t worry about doing tricks. It’s all about enjoying it.

Well if they’re putting skateboarding in, then they have to put WCMX in! It would be so cool to be a part of it. When you think of the Olympics, you think of running and athletics, but I want it to be more than that and for people to think of it as being for everyone.

Well thank you Lily for talking with us, is there anyone that you would like to thank?

I would like to thank my parents for taking me everywhere! And for Craig Brown, who really made me feel comfortable with riding here and has given me a lot of confidence to be included in the skate scene. Video above by Jack Abbott – see more on his YouTube channel