In this day and age, anything in skateboarding that can maintain for two decades is something worth celebrating. In a culture driven by trends and focus group manufactured coolness, only the strongest and most culturally anchored entities can weather the storm of twenty years of ‘skateboard time’.
Add independent skater-ownership into that context and you’re looking at an even more impressive achievement.

This here article is intended to commemorate exactly such a happening with both The House Skatepark and UK mainstay skateboard brand Death Skateboards hitting their twenty year anniversary this month.

No House event is complete without these two: Ash Hall and Shaun Currie.
Photo: Greg Somerset

For those of you unaware of either of these British skateboarding institutions, (although I find it difficult to believe that you would be), suffice to say that although one is an indoor skatepark and the other is a skate company – their raison d’etre and their approach to business is fundamentally similar.
Both are independently owned by skateboarders, and both are run in the interest of skateboarding, so to see them thrive is a testament not only to that, but also to every one of you out there who understands this reality and supports them both by utilizing their services and putting your money where your mouths are.

“How long do you reckon till Greg drives back home, drops his camera gear off and reappears with a backpack full of booze Timmy?”
OG locals in the house. Photo: Greg Somerset

It seems only appropriate then that these two institutions, linked by skateboarding and by a long running association that has seen Death hold many premieres and events inside the doors of Rob’s skatepark, along with sponsoring many House-connected local skaters and events – that the two should converge to celebrate 20 years together. At a rough guess I’d say that Ben Broyd did 500 tricks per hour during the time I was there. I guess Yoga and a Vegan diet actually works. Tail-boned frontside air.
Photo: Greg Somerset

Rob Bannister threw open the doors of the House for an entire 24 hours for free and as you’d expect, the place was packed from 10am till long into the night with skateboarders of every age, gender and variety, all there to shred and give thanks that people like Rob and Nick Orrechio are still a force within our national skateboard community.

“Keep doing backside carve grinds and one day I swear you’ll grow up to be 8 feet tall like me.” Dead Dave on Obi-Wan Kenobi platform duty. Photo: Greg Somerset

Brendan Watson’s trucks are so loose that you can get wheel bite from just standing on his board. He is an utter lunatic. Crailslide at a zillion miles an hour as always.
Photo: Greg Somerset

Among the many heads who turned up were an almost full Death crew including Dave Allen, Dan Cates, Zorlac himself, Adam Moss and the generally reclusive Mark Nicolson, plus all the more local Death riders such as Blinky, Ben Broyd, Timmy Garbett, Moggins and various others. Cars from the North unloaded the likes of Brendan Watson, Denis Lynn and Jono Coote into the bowl room, along with Eddie Belvedere, Ben Grove, Lois Pendlebury and many more besides. 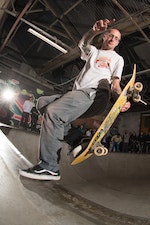 One of Jono Coote’s favourite hobbies is to take a nominally easy trick and turn it into something where breaking your ribs is highly likely. Bastard plant for Sean Goff.
Photo: Greg Somerset

As Rob himself put it, “All we need now is for Felix to turn up and we’re officially killing it.”
Guess what happened just as he uttered those words? Yep – the 50+ year old legend himself casually strolled up as he always does and the session was complete.
Watch the clip, peep Greg Somerset‘s photos and prepare for an in-depth chat with both Mr Zorlac and Rob Bannister in the weeks to come about the reality of running an independent skateboard-related business for 20 years.
Now, go skateboarding.

“Nothing compares 2 U.” Photo: Greg Somerset

The only trick that Ben Broyd struggled with all day, and by ‘struggled with’ I mean that it took him more than three tries. Nosebluntslide pre-grab-in.
Photo: Greg Somerset