You may recall reading about this Opus Skateparks private bowl build in deepest Devon recently, but if not, go peep the link at the beginning of this sentence for a bit of back-story on this truly amazing concrete beauty.
Our trip to Devon to shoot this Sidewalk Sessions – Secret Devon Bowl with Ryan Price and co wasn’t actually on the agenda until the eleventh hour: the original plan had been to link up with Ryan Price and an assortment of Bristol heads and hit the nearby (to them at least) Bath skatepark to take advantage of the sun.
As the date approached however, text conversations started floating the idea of switching location and possibly making a trip to Devon to sample the delights of Rob’s private bowl. Carve Wicked links via Sam Pulley and Welsh secret handshakes were exchanged and before you could say, “meet me at Towcester services at 9am on Saturday” – plans were set in stone and, thanks to the hospitality of the owner, we were set for the first outdoor Sidewalk Sessions mission of the year. 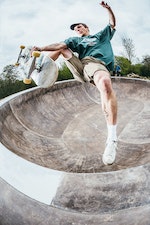 Clev, slob fastplant in the deep whilst sweating about talking to the camera.
Photo: Griff

Along for the ride were Jake Collins, James Griffiths (on photo duties), Tom Kinman, Beanhead, Tom Bailey and an assortment of other Newport locals who, like us, duly clogged up Rob’s driveway for the afternoon.
On our arrival we were greeted by an already in-progress session consisting of various local heads such as Josh Rounding, Matt Beer and his twin brother Marcus (that confused me for a while as I had no idea there were two of them), Arron Jago, little Lola T and Rob himself. An hour or so later we were also joined by Devon legend and skateboard archivist Mark ‘Trawler‘ Lawer, relocated London head Mike Day and a brace of their friends. One of only a few sessions that I can recall with skaters dating from every decade from the 1970’s to present day! 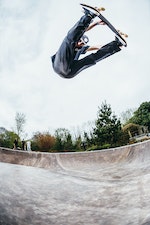 Suffice to say that the bowl is absolutely incredible and is a testament to the construction skills of BMXer/Skater owned Opus Skateparks.
Big thanks to Rob and co for their hospitality – hope we didn’t intrude on your peaceful weekend too much. 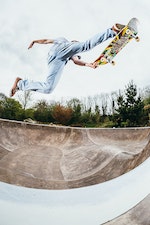 I had to check my nomenclature with Wingy first but yes, this is Sam Pulley doing a ‘Good Buddy’ – going in fakie, coming out forwards.
Photo: Griff 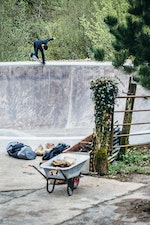 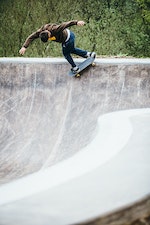 “Er, could you do another one Josh? Some dude’s head got in the way of the first one.”
Josh Rounding, deep end sugarcane. From Leeds to Devon. Grafter power!
Photo: Griff I almost had a whitey when I turned up and saw two Matt Beers. Luckily it was his twin brother Marcus and I wasn’t having a psychotic episode.
Deep end frontside boneless. Photo: Griff

“Good sesh that – can’t wait to drive another 300 miles back to my house…”
Photo: Griff

To catch up on previous Sidewalk Sessions in Darwen, London and Warrington – hit the hyper link in this sentence.

The circus is in town - Street League London 2018