It’s been a long, long time since the UK has seen an arena-based skateboarding happening anywhere near the scale of last weekend’s Street League London event.
Sure, there was the Nike European Am series relatively recently, which brought a bunch of European heads over to the capital and made a hell of a noise, but those were held inside a pre-existing skatepark and due to their very nature, didn’t attract international pro’s in the numbers that were once an annual event back in the late 1990’s.
We’ve tried hard to think but we’re pretty sure that the last thing on this kind of scale, both in terms of the skaters in attendance and the furore it caused, was probably the Generation 97 event held nearly 20 years ago at Wembley Arena.

Brazil’s Pamela Rosa smashed it all weekend then took one hell of a slam leaving her wincing in pain for the finals. Frontside lipslide whilst grimacing. Photo: Griff

Looked at from that perspective, it’s easy to see how much those of us who grew up skating in the 1990’s took Radlands and its series of international contests for granted.
That generation, who watched skateboarding shrink from the vert-driven 80’s behemoth and survive as the inward-looking, almost invisible anomaly of the early 90’s, were fortunate in many regards, (well if you forget about the Goofy Boy costumes and the 38mm wheels), as we got to experience the era where nobody gave a fuck about skateboarding outside of the people doing it.
Rose-tinted spectacles can be a dangerous accessory if operated incorrectly, but it wouldn’t be over stating the issue to say that one of the most culturally significant and fondly remembered aspects of said era were the Chris Ince-led contests in Northampton that allowed the UK skate scene to meet, watch and skate with pro’s from all over the world. And that is something that hasn’t happened in this country for nearly 20 years since Chris and co tried to make the jump from tacitly ‘allowing’ 100’s of skaters to sleep in a Lidl carpark in Kingsthorpe to a major arena event at Wembley.

It is within that context that last weekend’s inaugural British leg of the traveling circus also known as Street League took place. It’s unlikely to be news to any of you that Street League has, since its very inception, been something that has divided opinion and those same opposing positions on what it represents, what it means for skateboarding, and the merits of its cultural influence, unsurprisingly surfaced during the run up to this event.
If you want to hear arguments about ticket pricing, the suitability of certain sponsors and all the rest then you can find that all elsewhere.

One thing that probably does bear saying though is this – on the day of the Sunday Finals the entire arena was full. Moreover it was mainly full of people who had paid to attend. You know, those people who work normal jobs, pay full price for skateboards and skate shoes at their local skate shop, and who don’t get the opportunity to see the likes of Ishod Wair, Lacey Baker or Yuto Horigome skate on a regular basis.
You’re more than entitled to your own perspective but those people who enjoyed Street League are just as entitled to theirs and, if you’re unable to accept that, then it’s possible that you might have forgotten what it’s like to be a teenage kid in love with skateboarding.
With that out of the way – here’s a brief recap of some of the things that happened, courtesy of the lens of James Griffiths.

Too much happened to even attempt to give you a blow-by-blow account of the skating as the people in attendance are at the top of their game, tossing out tricks inconceivable to the average human on a minute-by-minute basis, but here are a few observations from the perspective of someone present throughout who had never been to Street League before.

Take everything you think you know about the pop of Tiago Lemos and multiply it by ten. In real life it is superhuman. This switch 360 flip was the height of an average child and required 4 camera men to capture it.
Photo: Griff

a) You’d be forgiven for thinking that consistency was the be-all and end-all of doing well in Street League: the scoring system seems, at least ostensibly, to suggest that but, perhaps due to the skateboarding pedigree of the judges, (who included Jesus Fernandez and Danny Wainwright) simply repeating the same run over and over was not enough to win.
Case in point being the truly super human Tiago Lemos who managed to fall off a lot during his runs but still ended up in the final.
This was due to a few factors – firstly: if you’re only going to land a few tricks in your run where others land fifteen then you’d better make them count.
Cue Tiago crook popping out UP the rail that everyone else went down.
Secondly, the ‘best trick’ section of Street League, despite the pauses it enforces on the action, does definitely allow people with a unique talent like Tiago to rack up the points, regardless of how many 360 flip lipslides the other dude is doing. And the switch backtail? Yeah, it’s real, and he can do it every try on above-waist-high ledges.
Fucking bonkers. b) The women’s contest was a highlight and contained a lot of surprises.
Wasn’t too sure what to expect on this one other than stellar flick from Alexis Sablone (on tap) and possibly a horrible slam from Leticia Bufoni (also unfortunately provided) but when it actually kicked off, the atmosphere was great. Tickets for Saturdays prelims meant that the crowd got that and the women’s event for the price of one, which meant that although not on the same level as the sold-out Sunday, the women’s event got plenty of love. Stand outs were numerous but the duo of Mariah Duran and the eventual winner Jenn Soto mixed up tactical consistency with ‘going for it’ in the best trick section and received much appreciation from the crowd as a result.

Shortly after doing this backlip, Leticia rolled her ankle pretty badly and was on crutches for the rest of the weekend. Downer for Miss Bufoni but it meant that a young skater from Ashford ended up getting her set up – she was understandable hyped. Photo: Griff

I’d never heard of Margielyn Arda Didal prior to last weekend but anyone who can pull 5050 late backfoot heelflips out in a contest setting like this, and make them look sick, is straight gangster as far as I’m concerned. Photo: Griff

Likewise, a name new to virtually everyone in the arena, (including the other competitors) was NB Numeric Asia rider Margielyn Arda Didal whose flight and ticket had been paid for by government of the Phillipines. Not only her ticket either, as her entire family were there too, going absolutely mental on her behalf. A brief conversation with NB Numeric head honcho Seb Palmer also added the info that not only had Margielyn never entered a big contest before, but also that she’d hardly even skated a proper skatepark before, so seeing her get through into the final was amazing. One other thing that nobody was expecting was to see a backside 5050 late backfoot heelflip but Margielyn obviously thought differently, and boshed several perfect ones out, along with a load of other tech ledge moves. A definite crowd favourite.

Despite not giving away any chips on this UK visit, Samarria Brevard straight up ripped all weekend. This feeble was one of many stylishly executed moves she pulled off, also including numerous flawless kickflips down the double set. Photo: Griff 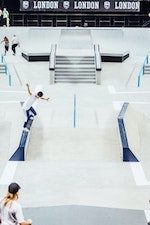 Primitive and adidas flow rider Jenn Soto had moves for everything and emerged the victor. Backside nosegrind. Photo: Griff

c) In a setting like this, watching ‘warm ups’ is a treat.
As anyone who got there early enough on either Saturday or Sunday will attest to, watching people like these blasting around getting used to the course before the contest starts is pretty mind-blowing. Seeing the likes of Mark Suciu and Ishod Wair messing about is next level and really brings home how talented skaters of this calibre are.
Luckily, Alex Winstanley was on hand to film some of this so you can get a taste of it below. NB: apparently switch 360 flipping down double sets constitutes ‘warming up’.

Ishod is absolutely unbelievable to watch in real life.
Front feeble with about 1% of effort. Photo: Griff And finally d) Yuto Horigome is one of the most humble and amazing skateboarders that I have ever had the pleasure to witness. Claims direct alert – I called it on Friday – it was so obvious that this polite, modest Japanese ripper was going to win and I’m really glad that he did. In direct contrast to some of the self-congratulatory behaviour that you might expect in this kind of context, Yuto simply got on the course and went OFF.
Tricks that nobody else did, different stuff in each round, and an ever-so-Japanese response to the praise of everybody watching. If this kid doesn’t end up as a global Olympic superstar very soon then I’m not a fat, red-faced, old man. Staggering skateboarding.

France’s Vincent Milou absolutely slayed this hubba. Gap to backtail literally every try then this kickflip crook first go in the Finals when it counted. A well-deserved second place. Photo: Griff

I still have to Google the spelling of Phil Zwijsen’s last name every single time. Can you re-brand please mate? Nosegrind transfer across. Photo: Griff Harry Lintell was on hand to represent Ashford and he did so with aplomb.
He also represents black nail polish but who am I to judge?
Gap out to nosegrind. Photo: Griff

In between manning the Nike SB Insta story for the weekend and generally being the boss as usual, Korahn Gayle repped Lloyds as hard as ever with fakie kickflips like this one. Photo: Griff

Reach for the lasers. Photo: Griff

If you want to see the full results, get over to the Street League site.
Big thanks to Tom Mangham at Monster for the invite and to everyone behind the scenes.

Raiders of the Lost Park returns with a true head-scratcher

République Gets Stoned with Volcom

République Gets Stoned with Volcom