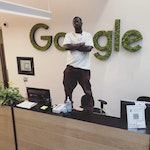 Firstly, full and unreserved credit given to the mighty denizens of the Slap message board for alerting me to this little mini doc on the one and only Antwuan Dixon.
It’s by no means new, (originally uploaded to YouTube around 9 months ago) but it was new to me when I watched it and I felt as though it ought to be posted and shared, regardless of the fairly whopping view count it already has.
Additionally, seeing that Antwuan had been welcomed back to his original truck sponsor Thunder in late April of 2018, (announced with an Instagram post of him and Jim Thiebaud), along with the generally happy and positive tone of his recent Insta output seemed to make a Sunday Service celebrating this guy’s return to health and happiness a no-brainer.

I’m sure that ‘Big Candy’ needs no introduction – few skaters have exploded into the global skate consciousness with the force or immediacy that Antwuan did following the release of his 2005 Baker 3 part. In some ways reminiscent of the almost otherworldly board control and nonchalance of Tom Penny, Antwuan’s natural gift, his unbelievably smooth style and his infectious personality turned the unknown kid from Victorville, Southern California into a global superstar almost overnight.
Regardless of what kind of skateboarding you personally run, I defy anyone to watch the Baker 3 part or the Baker has a Deathwish part and not be bewildered by the amount of skill this guy has. (Pay close attention to 2:01 in the latter part for the greatest fakie kickflip that will ever be done by a human being too – sorry Kalis/Rob Welsh).

Sadly, as Antwuan’s stock within skateboarding rose, best selling shoes on Supra were released, and the public clamoured for footage of the man in question, cracks started to appear in the facade of global skate stardom and with each ill-fated rumour or vaguely referenced anecdote, life seemed to be unravelling pretty quickly for him.
There’s no need to go into the ins and outs of his various altercations with the law, nor his arrests and alcohol problems as they are all addressed frankly in the inspiring video above. What does probably bear saying however is that for a couple of years, it looked as if Antwuan was done, a candle that had burned far too brightly far too quickly and that his own inner demons had extinguished the potential that had attracted everyone to him in the first place.
Happily, as you’ll find by watching Dangerous Freedom and/or by following Antwuan on Instagram and seeing what he’s up to on a daily basis, (most recently visiting Google HQ as an invited guest of all things) he has weathered a litany of misfortune and personal tragedy that might well have put a lesser man in an early grave, and appears to be making headway with getting back to doing what it was that made him happy in the first place: skateboarding.
Anyway, enough bullshit – watch the video above and get inspired.
Everyone is stronger than they think they are.
Big up Antwuan!
Cover photo nicked from @antwuandixon

The circus is in town - Street League London 2018

After the strictly indoor, sheltering from blizzards theme that ran throughout episode 2, a slowly emerging spring has made filming The Streetys Are Ours Episode...