The Vans Shop Riot 2017 Israel Qualifiers went down the other day, with a highlights video available here alongside a photo gallery and press release. The UK leg will take place in Hull over the 29th and 30th of July, keep that one free!

For the 8th time in its 9-year history, Vans Shop Riot headed to Israel and the newly opened Ashdod skatepark, in the South of Israel. With Israel’s warm weather and beach view this was an ideal setting for a riot.

Overall, 6 shop teams competed with the top 3 making it onto the quarterfinals. This round showcased some of Israel’s most solid skate teams including; Gorila the local skate shop form Ashdod city, Wheely’s from up north, Gili’s Skateshop, from Jerusalem, the most dominant team in shop riot history, Lightwave the iconic skate shop from Tel Aviv, Boarderline which was joined by the exciting rider Snir Kovshi, and Noiz Skateshop from Tel Aviv.

For the first time ever as a team, the Gorila team showed great consistency, in their local park. However, the main show went down between the 3 big rivals, Lightwave, Boarderline and the most dominant team, Gili’s Skateshop, who won 6 out of 7 local riots. Lightwave,headed up by the aggressive transition master Tzachi Einat, threw caution to the wind and grinded every possible spot in the park. Boarderline’s super stylish rider, Bitzki, brought his endless flow to take the team to the second place. But it was the Duracell bunnies from Gili’s, consisting of Jimmy, Kessler and Doron Arad who complemented each other and were practically flawless throughout the contest leading them to take the top prize. The final straw came when Doron landed a double flip over the big pyramid, ultimately leading him to winning the Nixon best trick comp! The team’s variation was undeniable between tech from jimmy, rad and fast tranny tricks from Kessler and big bangers from Doron, and then when you put it all together made it look just too easy, and therefore brought Gili’s 7th local shop riot win. 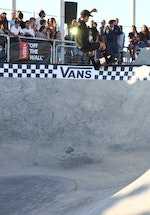 Vans UltraRange Pro - the first ever co-molded outsole from Vans

Vans UltraRange Pro - the first ever co-molded outsole from Vans