Located just within the southern boundary of the M25, Caterham is mostly known for being the birthplace of both actor Bill Nighy and former panel show presenter/gak enthusiast Angus Deayton. It also contains the focus for this month’s Spot Check, the converted church which houses Skaterham Skatepark.

Skaterham has been serving the needs of the local community, as well as visitors sheltering from the weather, since way back in 1999. Over that time the layout has seen a few changes, but the core spine miniramp/vert ramp/jump box area remain relatively unchanged beyond a few touch ups. The vert ramp is undeniably the park’s biggest draw – standing at a fairly manageable 10′ with 1′ of vert, it is big enough to float airs out of without being too big, making it perfect for those wanting to get into vert skating to start learning on. This has been the training ground for local Drawing Boards ripper Nick Rains, as well as seeing regular appearances from the likes of Greg Nowik, vert prodigy Alex Griffiths and others drawn to the vertical slopes with ages ranging from early teens to mid 50s.

The park also boasts a 4′ spine miniramp which is nestled next to a small driveway/hubba set up and a bank, as well as a large roll in leading into a hefty jump box and finishing up on a 7′ quarterpipe. There is also an outdoor area which, as I haven’t visited the park during daylight in about ten years, I have no memory of or idea of what state it might be in now.

The crew at Skaterham have been holding it down for a long time now and the sessions are well established, so we highly recommend grabbing your pads, heading over and getting stuck into a session! In the meantime, scroll down for a quick edit compiled of a couple of Tuesday night missions, some photos by Rich West and some words with long time employees Ad McEvoy and Darren.

Session wise, the park opening times vary but Tuesday night is the relevant skate only night. Monday and Thursday nights are the designated mixed adult sessions running from 8:30pm – 10:30pm and Saturday’s offer up a mixed session (caution: will involved scooter dodging) while the park is closed on Sundays.

All Photos by Rich West

The park is run as a community project – how does that work with regards to rent, upkeep, staff etc.?

Darren: Skaterham is now a registered charity. We have a lease on the building from the site owners which allows us to not pay rent or rates as long as it is run as a community project. This means that we must do all we can to make it accessible to everyone, not just skaters, BMXers or scooters. We operate drop in sessions for young people, we do school PE lessons here, we organise additional activities such as arts/crafts and ramp-building too. We also allow the community to visit and just spectate and have a coffee. Other uses have included drone nights, nerf nights, badminton and indoor boot sales. Although our primary offering is a skatepark, this is actually a community project trying to address everyone’s needs.

“Once when he was nine he somehow got my phone number and phoned me up asking the names of all the members of Wu Tang.”

Was there much red tape encountered in the first place when opening up in an old church? I never saw the original layout before you guys moved to there, did much differ?

Darren: It was easy to set up in the church as it had damp, a broken roof and nobody wanted it. It was offered to church groups but it would be expensive to heat and maintain as it’s grade 2 listed, so it was “given” to us to look after. Surprisingly there were no objections, even from ex-guards. Everyone was happy that it was at least being used rather than just rotting away. It was difficult to come up with a ramp layout and it would be difficult to change it. Certain ramps are in place because we’ve had to protect or cover the original fixtures and fittings. Under the roll-in are two big stone angels, under the 5ft long quarter is the font and the vert ramp is looking after the original altar and mosaic wall below the platform!

Our former home was the gymnasiums which was pretty grotty and bad but in a good type of way. The ramps were falling part and we had a smoking room! But it showed us how popular the sports were and inspired us as staff to continue. We were only supposed to run a three year project (1999-2002) but we are still here nearly 20 years later

Nick Rains pretty much learned to skate vert in here didn’t he? When did he first start coming down and could you tell he was going to be gnarly?

Ad: That guy started coming down at eight years old and I distinctly remember him being the kid just doing tricks way beyond his mean, I knew he’d be amazing! Once when he was nine he somehow got my phone number and phoned me up asking the names of all the members of Wu Tang.  Yep he’s a natural – hardly skates but just rips when he does, I’m pretty sure he’s never watched a skate video but he likes going big. He’s got as many nicknames as tricks too; Vert Chav, Rabies, Dave, Labrat… I’m filming a part with him right now as there’s never any footage of him anywhere, keep an eye out!

“Casper Brooker grew up skating here, he used to show up all Bammed up with his fan girls.”

What other notable heads do you see pass through the park regularly?

Ad: Over the years there’s been some rad ones for sure! Casper Brooker grew up skating here, he used to show up all Bammed up with his fan girls. I knew that kid was going to blow up and now he is ridiculousness. Who else has been through who’s rad? Felix Parker, Greg Nowik , Isaac Miller, Jordan Thackeray, Pete King, Mike Manzoori , Daryl Dominguez, Trev Wedd, Dirk Widdman, R.J.,  Jak Tonge, Renton Miller, Adam Keys, Dean Robertson, Cov Sid, Alex Griffiths, Ash Challis, Lucian Hendricks, Jerry Wilson, Pooch, Potter, Steak, All Terrain Trev and loads more have all blown my mind here… and of course Batch, Blaquire and Mannion! 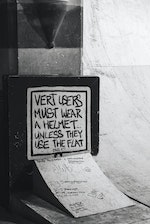 How important do you feel it is to have a facility like a vert ramp, which you’re pretty much the only park in the South East to have since Baysixty6 got rid of theirs?

Ad: Massively important, I don’t really skate it myself but I can see that the guys who do need an indoor one they can hone their skill on. Vert has been around for so long and it needs more love for sure. Tuesday night goes off! Good vibes all the way – forget the hierarchy, just skate!

What’s in the future for Skaterham – any additions or changes we can expect?

Darren: The future is to access more funding and look at ways in which we can become financially secure for decades to come. All skateparks struggle at times so it would be great if we could get government funding for all parks to encourage kids to get healthy and active – perhaps they could receive tokens that they exchange at skateparks for sessions that we can cash with the local authority? We are looking at holding a leg of the UK Independent Vert Series for the first time in September too. Our next funding amount will see the coffee shop developed under our new mezzanine which can be used by the community and will employ local young people. We are hoping on teaming up with Sport England over the summer and offering an airbag, the additional income from which may allow us to refurb the ramps inside and outside… 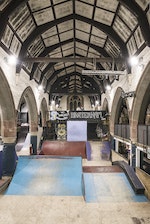 One of the UK's finest: Mike Manzoori talks video making in the Internet age