Before chairing a panel at the Pushing Boarders conference, Ocean Howell (Professor Howell to you and I) forewarned his fellow panelists that he planned to drop the following metaphor:

If skaters are like dogs chasing a car (that car being funding, influence, the ear of decision makers, etc), what happens if we unexpectedly catch it?

Just before the conference, in a flurry of paws, lolling tongues and daft grins, a bunch of skaters from Nottingham excitedly bundled into that metaphorical driving seat – with almost £10,000 of National Lottery money to spend. We desperately wanted to do a good job, to prove to all manner of powers-that-be that skaters could be ‘good partners’ to their city, a phrase borrowed from Malmö’s mover-and-shaker Gustav Éden when describing how to build the trust and political capital necessary to achieve incredible things in a rainy, unlikely corner of Southern Sweden. But what would a ‘good job’ look like and how would it help us move us closer to the skate friendliness of Malmö and the recent power moves up in Hull?

The work of international charities, like Skateistan, SkatePal, Free Movement and Make Life Skate Life, has demonstrated that skateboarding can reach out to young people in deeply challenging circumstances, including active conflict zones, enabling them to re-engage with play, friendship and physical activity in a way that almost nothing else can or has done. But in the comparatively rich, developed world, strategies need to be different.

The powers-that-be have tried to skate stop this Nottingham Trent Uni spot in so many ways over the years – none successfully. Myke Trowbridge reinterprets yet another attempt. Photo: Mahmoud Ahmed

Cities like Hull and Nottingham have not experienced abrupt and total breakdowns in security, commerce and government like Kabul or the West Bank. Instead they underwent slow decline, with the 2007 crisis exacerbating inequalities that have drained urban economic viability and sense of civic worth since at least the 1970s. This means that there is a need and a demand for action, and skateboarding has a place in that, but there is not the same political space to directly apply the model of Skateistan, especially in a UK or US context where municipal governments tend to fall back to age-old ‘fear of youth’ strategies when times get hard.

This is what Cambridge criminologist Elizabeth Burney calls ‘punitive populism’, as seen in anti-skate and wider anti-youth initiatives. By Laws from the early 2000s are still in place, if not necessarily enforced, in cities like Nottingham, Sheffield and Birmingham, whilst more recent PSPOs in towns like Kettering have not only banned skateboarding but also prohibit anyone under 18 from entering parts of the town at certain times.
As long as some local politicians surrender to such reactionary impulses, skateboarders are not top of their lists to help address their cities’ problems. So we must get better at evidencing the benefits of what we do. In doing this, skateboarding can help our cities become more humane, tolerant and welcoming of difference.

In the case of Nottingham, an almost identically sized city as Malmö, its current problems are acute and illustrative of wider failings in urban development. Nottingham is a big economy – generating by far the largest amount of per capita wealth in the East Midlands. Yet it has the lowest household income of any UK town or city.
If anything portrays the parlous state of late capitalism, this is it: a city that generates huge amounts of cash money – almost £9 billion a year – and yet very little of it goes to the people who actually live there. Nottingham has the youngest population of any large UK city, yet also has the lowest proportion of graduates who choose to remain after finishing their studies. It has one of the lowest proportions of school pupils who progress onwards to higher education and, like many other cities across the UK, US and Europe, has more than its fair share of precarious ‘bullshit’ jobs, leading to lower than average wages and understandably dampened aspirations amongst young people.

There are many, good (great) things about this city. And skateboarding is surely one of them. A walk from Forty Two skateshop through Hockley and the Lace Market into Sneinton will take you past bars, coffee shops, Montana streetwear and graffiti supplies, Mim clothing, Broadway arts cinema, and into a thicket of DIY rehearsal spaces, studios and gig venues like JT Soar and Stuck on a Name. The sound of Nottingham’s skate scene has long rung far beyond its borders, with The Malibu Dog Bowl and the Hyson Green Bowls in the 1970s and 80s, to Kareem Campbell, Danny Way, Dill and Gino showing up at Old Market Square and Broadmarsh Banks in the 90s, and now the thriving community at Sneinton Market and the Nottingham DIY skate scene today.

To link these assets and help address the challenges above, we did four things with our Big Lottery grant. We brought a bunch of boards and helmets, all from independent, UK-based companies (“Hi” to Landscape, Isle, Drawing Boards and Death) that would appeal to different tastes but were consistent with the values we wanted to support – and engaged beginners from the very start with deep skate culture and beautiful graphics, rather than retaining learners in an arbitrary quarantine in which only cheesy learner set-ups are good enough. Skateboarding is cool as hell, and everyone is cool enough to skateboard. 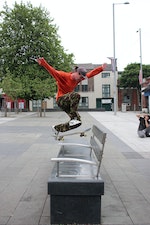 We invested in formal and informal training for skate coaches, not just so they could lead fun sessions safely, but so they are then equipped for careers in youth services or sport development – rather than the precarious, low pay warehousing and bar work so many skaters spend their 20s and 30s doing. We held back resource to run two terms worth of skate sessions, free to learners but where the coaches would all be paid at least the Living Wage – because their skills and time is valuable and it’s about time it was treated as such. And, as the cherry on top, we designed and delivered a workshop and exhibition that tried to build on the creative interests of young skateboarders, linking them to the development of specific, industry-relevant skills. This was inspired by the fact that, like many cities, Nottingham has a ‘creative quarter’ in which good jobs are concentrated, but jobs that only seem accessible to people with the right connections, qualifications and (often expensive) equipment. That Nottingham’s creative quarter is less than 5 minutes’ walk away from both Sneinton Market and one of the most deprived wards in the UK, St Ann’s, illustrates the invisible barriers that exist in most of our cities.

Skateboarding engages young people, often unconsciously, with photography, film, design and other visual arts, architecture, fashion and politics. More than that, it is intensely participative: you are a skateboarder, not a passive ‘fan’ of skateboarding. Any one of us, whatever our skill level, can contribute to and change skateboarding – something that is increasingly difficult to do in music and other avenues of popular culture as they become increasingly consumption-based. And although very few people are likely to spend their careers exclusively as ‘skate photographers’, it provides a unique environment to study how to photograph people, the city and dynamic movement – with an aesthetic and visual heritage that is hot shit in the mainstream right now, as any cursory glance at fashion brands’ look books, ‘influential’ Instagram accounts and even Vogue magazine would attest.

Sixteen participants took up the free 4-day workshop places at the Photo Parlour, Nottingham’s community darkroom and studio, broadly 50/50 male and female, with ages and experiences ranging from early teenaged skaters considering future college courses in photography; late teenaged photography and visual arts students who either skated or were fascinated by the act and the culture of it; 20-somethings within Nottingham’s skate scene with loads to offer but desperately needing a confidence boost and some skill acquisition; and those in middle age who’d worked in fashion, had a career change, and were aware of the transferability of photographing skateboarding and the weird and fascinating characters it attracts. Along with an expert talk from Sidewalk lens-man and East Midlander Matt Clarke, a range of experienced skate photographers and local lurkers gave up their time to mentor, critique and encourage, and time was paid for veteran sponsored skaters like Chris ‘Bambi’ Price and local young bucks Myke Trowbridge and Owen Byrne to skate for the (insane amount of) cameras and help the participants explore their city.

To wrap it all up, the participants’ photos were printed up professionally and exhibited a fortnight later at a free public event, alongside the work of experienced Notts photographers like Neil Turner and Jake Rumsey, giving the participants’ work parity of esteem. Seventy photographers, skaters, friends and family crammed into the Photo Parlour on opening night, helped by a zine workshop from Harriet from Brash Skate & Create, and – as is brilliantly predictable – an impromptu summer evening skate session broke out in the car park outside.

The point of all this was to show to the city that skateboarding makes it culturally richer, that images of skateboarding within Nottingham can be iconic, and can encourage people to visit, stay, study and work in the city and – most importantly – to demonstrate to the participants that their interests are valuable and that they have agency to pursue the things that inspire them. In a world where 30% of current jobs are forecast to be replaced by machines in the next two decades (by the cautious and in no-way-radical PwC, no less), ‘making yourself interesting’ – taking photos really darn well, putting on exhibitions, making zines, making connections with people from other cities and countries – is more likely to lead to lifelong fulfilling work than playing it safe and listening to decades-out-of-date advice from professionals to grow up, knuckle-down and forget about the stuff that actually matters.

Concrete Waves skatepark in Newquay is here and it's amazing!

Concrete Waves skatepark in Newquay is here and it's amazing!

"The Internet isn't an excuse to not still be a great skateshop."

Pumps, bumps and flumps - Raiders of the Lost Park hits the moon (sort of)