After a decade of campaigning, awareness-raising and bloody-minded tenacity on the part of the local skateboarding, BMX and related communities it is with great pleasure that we can report that Concrete Waves skatepark, Newquay is finally here and yes, it’s incredible.
With construction complete and ribbon-cutting done, Concrete Waves officially opened to the public last week and is calling Siren-like to any and all of you out there.
Thankfully in 2018, the construction of excellent skateparks across the UK is no longer a rare thing but, construction of a skatepark on this scale, with a lay out as inspired and brilliantly realised as this one, is still absolutely worth shouting about.
Huge respect to everybody involved in whatever capacity in making Concrete Waves a reality – this place should represent a new bench mark for all UK parks to follow in its wake.
Any councillors who happen across this, please take note: this is the correct way to invest in the future of your community!

All build and site photos/videos courtesy of Maverick Industries

With the above very firmly in mind, we headed down to Cornwall last week to have a look around this behemoth, catch up with Div Adam, and chat to see the good people at Maverick to get a little more background on the project. Read on, check the photos/video and get inspired – this is what’s possible with enough perseverance!

What’s the back story on this project? How long has it been in the making from initial discussions to completion?

Newquay’s Concrete Waves has been in the making for the best part of 10 years.

How did Maverick get involved in the project?

Maverick won a tender for the project several years ago and worked with the local riders on design ideas which evolved over time and ultimately resulted in the progressive style of park which is in the ground. We have supported the aspirations of the local riders for almost a decade.
Ian Jennings, our designer has worked on site at Newquay from day 1 to ensure that the design was executed perfectly.

Is the new park on the same site as the old Wooden Waves site?

Yes, that’s right – the new park is in Trenance Park in the same location as the old wooden skatepark.

How was it funded? How much was the overall build cost?

Maverick worked with the Council to help identify where the funding could be sourced. The Council contributed the lion’s share of the funding for this from 106 funds and have been incredibly supportive of the project.
Sport England topped up the funding with a further £75K from the Community Asset Fund.
The total budget for the build was £540K in the end.
There is extra funding in place now to install floodlighting and CCTV, which will be happening shortly.

Can you break the build process down into stages for us?

The build took 28 weeks to complete, we were lucky with the weather this summer.
We started in January with the groundworks. The steelworks in this job went on right up to the last week – an incredible amount of welding was needed, not easy work in the temperatures we’ve been experiencing. Concreting started end of March with the final pour mid July.
This project was built with love by our amazing crew. We were working on other sites alongside Newquay so upped our resources by taking on a couple of Newquay local skaters who have been a great help (up and coming rider Jake Sparham and a local tradesman, Brendon Pyke) Ginga Army General, Div Adam also joined us mid way through the Newquay build – Div’s an extended part of our Mav family and has been for several years now since he first worked with us on Melton Mowbray.

The lay out looks to have hit all aspects of skateboarding needs with equal precision – presumably that was the main intention of the design, right?

The main crux of the design was to create a progressive space but one that isn’t diluted or compromised. It does what it does well – it offers a long unbroken street course, retro pool bowl and big high end flow bowl. The brief was to create a community facility first, but one that was designed to an international standard for future events and comps, and potentially an Olympic training ground . 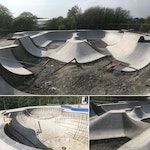 Obviously a skatepark like this needs to cater to skate/BMX/scooters, etc – how does that necessity fit in the design?

Its a completely inclusive and accessible space – the combination of features offers something for everyone.

How many different people worked on the build?

We started with just two on site for the initial prep works, this grew to 10 during the concrete phase. Pretty much all the Maverick crew have done a stint at Newquay during the last 7 months. It’s been an incredible project to be involved with – pretty monumental for Maverick as a company.

What about logistics like the amount of earth moved and amount of concrete used?

There wasn’t a huge amount of earth moved on this one, not compared to something like Henley. Newquay involved a lot of blockwork and build up. We used 2000 blocks on the job. We used a great local concrete company – Maen Karne for the crete. In total I believe we used something like 500 cubic meters on the job.

You had some pretty notable names working on the final spray crete and shaping – who was involved?

Ian Jennings ran the job – nobody can execute a design on site better than the designer himself. He is a perfectionist. All our crew are multi-skilled, and many have been with us from the start of Maverick, eleven years ago. Young Jake came on as Ian’s apprentice – he was as keen as mustard and a great asset to the team. He has been taught by some of the best and has learnt some good skills.
Div Adam, as mentioned earlier, has been with us on and off since 2015 when we built Melton. One of the family – but with the freedom to go do his own thing when it suits him. He’s been an inspiration to the local skaters, watching Div fly around the park is a sight to behold. We did take on another local skater but unfortunately he managed to break his leg at Mount Hawke on the second week he was with us which put him out of the picture.

Talk coping to me – where was the pool coping sourced?

When pool copings are specified we always use Viking Block which we import. It’s way more expensive than regular galvanised steel copings but we couldn’t have built the retro pool bowl in any other way. It rides like a dream.

In UK terms, this is a pretty large-scale project and due to it being in one of the UK’s most popular holiday destinations is bound to receive a lot of attention – could this be the start of larger scale concrete parks like this one becoming a regular thing do you think?

We are hoping that Newquay is the first of many. We are seeing budgets grow year-on-year for these parks and are involved in a few other projects of a similar scale. We all need to work harder at educating Councils and also funding bodies so that they realise the numbers these parks attract – one facility for multiple riding disciplines – they need to grow in size to accommodate this.

Are there any people in particular who deserve an extra shout out here?

So many people were involved in bringing this park to reality – huge credit to Councillor Olly Monk and Town Clerk Andy Curtis. Hopefully other Councils will draw on their experience and have their eyes opened as to what is achievable.
The local skaters were great – there was a huge amount of interest and Ian was happy to show people around and talk them through the build. They were very respectful of the site which we really appreciated.
The focus was not about how quickly we could finish the job, it was about delivering the best quality park for Newquay and we are incredibly proud of all our crew for what they have achieved.
We believe we’ve raised the bar with this one, hopefully the start of the next chapter….