Leo Sharp comes through with round two of our 2016 Photographer’s Stories, featuring tales of irate pissheads, the inner workings of the Ganjwax crew, Cornish ditch spots and even a recipe for those in need of a perfectly baked skate trip formula…

As already stated in the UK Bones tour article, this spot was never likely to be skateable on a weekday due to every available space on the bench being taken up with Brighton pedestrians. It took Yonnie Cruz and his particular brand of charisma having a chat with the seated humans to create enough room for Corey to skate the bench.

After Corey had nailed the flip in twice and we were about to head to the next spot, a woman sitting outside a nearby bar decided to tell Yonnie that it was rude of him to ask the people to move. Being an amiable chap, Yonnie tried to explain that the pensioners, mums and kids had actually enjoyed the show of watching Corey get his trick. The woman didn’t like this and proceeded to get on her high horse and try to lecture Yonnie on politeness. Further retorts from the rest of us caused the woman to stand up (somewhat unsteadily) and motion to throw her wine glass at us. If it hadn’t been for one of her less zealous colleagues stopping her, things may have ended badly. During our trip to Sardinia in Easter 2016 I learnt Ganjwax CEO Jed Coldwell keeps his riders on a short leash, expecting only the highest standards in wax to ledge application.

The bench that Dom is backside flipping in this photo didn’t just happen to be positioned next to the perfectly smooth marble kicker, in fact it wasn’t even close by. All the surrounding benches were screwed into the floor and rusted solid. Our friend and guide Luca found a ‘moveable’ one across the road and up at the top of about 500 steps. After dragging the solid iron bench all the way to the kicker, Dom knew that if he wanted to make a good impression on the TM he’d have to get buck. Unfortunately, the Ganjwax secret formula proved just too slippery for grinds when applied to the already slick bench. Dom decided the only way to keep his spot on the team would be to go up and over the neck high obstacle. Although difficult to tell from Jed’s poker face, the backside flip must have met with approval as Dom is still currently on the team (and not consigned to the pile of skaters who didn’t make the cut…). 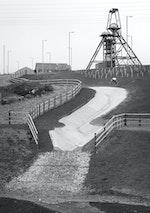 A new ditch spot in any scene always garners a fair amount of interest. I’d seen a few bits of footage of this Cornish gem floating around the internet when long time resident of the Kern Andy Crayton hit me up to go and shoot a photo. When first setting eyes on the spot it looks pretty perfect, but is on closer inspection certifiably gnarly as fuck. The flat bottom is almost non-existent and the concrete is ten times rougher than it looks. As soon as you hit the downhill you pick up speed pretty quick; just ask Crayton’s mate Snail who ended up taking one of the worst slams I’ve ever seen attempting to ride the ditch to the end.

With this in mind melon grabbing over the ‘hip’ straight into the downhill section is pretty nuts…which seems to be Andy’s bag considering the last photo we shot together involved front boarding a fork lift truck!

The Primitive X Get Lesta collaboration trip lasted for a week or so I think. Due to working at a University and it being the middle of term I only got to go for one Sunday, but with the ridiculous skateboarding humans in attendance (Diego Najera, Trent McClung, Charlie Munro and Devine Calloway), it turned out one day was all we needed to get a grip of photos. The one person who had evaded my lens all day was Devine Calloway. The spots we’d hit had been a tad on the gnarly side for him, plus rain had stopped play for a a couple of hours.

Devine had expressed an interest in a ‘kicker’ spot down by the river, so as the ground dried a little and the light faded Devine got work and nailed this backside flip and a sublime backside bigspin. 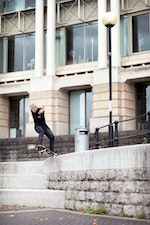 Instead of a story behind this photo, here is instead a recipe for a UK summer skate tour…

Method (for UK Team Manager to adhere to): Coordinate and pick up skaters arriving from multiple countries. Ensure everyone arrives at hotel. Procure substances necessary for the majority of the skaters to function. Wake up at hotel and make sure everyone gets up and gets into vans to travel to the next demo and signing. Placate everyone who hasn’t had breakfast. Stop and pay for food at extortionate motorway services. Continue driving to next demo and get stuck in endless summer holiday traffic jams. Arrive 2 hours late to demo. Assure irate shop owner that signing will take place after demo. Run off to get water for demo. Return to MC demo with broken loudhailer. Corral team into shop to facilitate signing. Finish signing and talk about heading to hotel. Listen to photographer and filmer whinging about the lack of street skating and subsequent street photos/footage on the tour. Assure photographer/filmer that against all the odds there will be time to street skate. Head to hotel. Buy everyone dinner and booze. Repeat for 10 Days.

More Photographers Stories from the previous calendar year today, this time in the form of Reece Leung’s five favourites from his 2016 folder. Covering tales...

We're stoked to see another section from James Harris' Little Paradise DVD hit the web, this time in the form of Tingley's most ATV skateboarder...