More Photographers Stories from the previous calendar year today, this time in the form of Reece Leung’s five favourites from his 2016 folder. Covering tales of poisonous spider bites, livid pedestrians, doubles with motocross bikes, ‘Metal Gear Solid’ missions to break into private car parks and scaffold scaling beanplants, the insight into the lengths needed to get that perfect photo continues!

Denis Lynn – roll in, Biarritz, France.
While on the Lé Denis Vans UK trip Denis was always the centre of attention, a constant entertainment and annoyance throughout the week. He decided to sleep in the van rather than join everyone in the tents. This didn’t work out too well for him as one night he couldn’t hack sleeping in the van and so he thought it would be a good idea to sleep outside in the woods. He woke up to discover his face had been bitten multiple times by spiders and his face swelled up a treat just in time for this amazing spot in Biarritz. Denis stayed in the van feeling sorry for himself, we got a short session in and then it pissed it down.
A couple of hours later we returned and everyone got a proper skate on, Denis felt lonely in the van and wanted to be the centre of attention so he decided to drop into the huge cobbled ‘tranny’. One thing led to another and he just decided was keen to do a roll in without warning anyone. His wheels couldn’t take it so he grabbed Sirus’ filmer board with bigger wheels. He continued to eye up the spot while looking like a battered Rocky Balboa, he could barely open his right eye. I got set up just in time before he decided to change his mind. After a lot of anticipation he went for it and was so close to skidding out at the bottom but managed to hold on and pull it off, this was one of the most ridiculous things I’ve witnessed for sure. After this he was once again the centre of attention and the world was normal again. 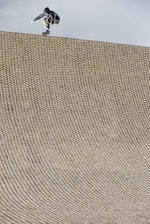 Daryl Dominguez – kickflip roof bank, Leeds.
While shooting for Daryl’s interview he ventured up North a few times, on this one Ben Powell was kind enough to drive us to the outskirts of Leeds in Beeston. I’d seen this roof spot previously while skating a spot and people had always talked about skating it. Daryl is down to skate most things and thought it looked safe enough to skate the banked roof. He climbed up there and tested it out and then started trying to ollies on the bank, finding it solid enough to try some kickflips. After a couple of attempts a man from the off licence below came around the corner towards me in an aggressive manner asking me who was on the roof, I pretended I didn’t know anyone was on the roof and said I happened to be there taking photos of the peculiar building. He then clocked that Daryl was trying another kickflip just as he turned around and started kicking off at me even though I wasn’t even on the roof. Daryl wasn’t even damaging the roof anyway. Daryl’s consistency came through and I managed to shoot one while the man was trying to get in the way of the camera, Daryl managed to land a couple and then jumped down, making this five minute mission a success…the man wasn’t bothered once Daryl got down and it was like he’d completely forgotten, bizarre!

Dave Snaddon – bump to crook, Bristol.
On a brief mission down to Bristol I managed to meet up with the legend that is Snadz, getting lucky with some lovely sunny weather to try and shoot some photos. We grabbed a coffee and saw this bump to rail spot which Snadz said he’d previously tried to crook grind for James Harris and not landed, so he thought he give it another go. This thing is high and it’s awkward to get out of the bump, pedestrians started to clock Snadz and began to watch on. The noise of two classic Bristolian lads on motocross bikes could be heard from a mile off as they approached us, pulling up and asking ‘You filming for YouTube are ya?’
We both explained it was a photo shoot and they were keen to get in the background of the photo pulling a wheelie, although only one of them attempted this for the photo as they were the more skilled in the art. After a few attempts and some great synchronisation we managed to shoot some where he was in the background fully leant back.  After the successful wheelie the biker told us to contact him when the photo went live. All of the onlookers were hyped on this free ‘show’ they had stumbled upon and Snadz was stoked to have landed it, let alone with a fellow Bristolian wheelieing in the background. Big up to Ashley Moloney for the wheelie!

Matthew Nevitt – backside noseblunt, Manchester.
Myself and Nev had planned to shoot some photos for a while and we never got round to it because our work schedules clashed, but by some miracle it was hot and sunny in Manchester one day and I missioned through. We headed to ‘Nothing Square’ and decided to shoot this noseblunt. I was playing around with different angles and really wanted to shoot it from a high angle. I saw a car park and thought it would be ideal for the photo, going on a ‘Metal Gear Solid’ like mission to find a way in only to realise that it was the private car park for some flats. I went around the back of the flat and was looking for ways to enter the building but all of the doors were locked and needed an access code.
Clocking an estate agent and client about to enter the building I tried to walk in with them, but the estate agent looked at me moodily and just closed the door. I then spotted some cleaners approaching and they entered the building, so I held the door for them and then managed to follow them in. I had made it in to the lobby and then walked upstairs to try to find a way into the car park but all of the doors were code locked again, I then clocked the estate agent walking down the stairs toward me so I avoided them by running back down the stairs and into the bin storage room. After coming to the conclusion that I’d need a code to enter the car park I almost gave up but then saw a fire exit in the bin room. I pushed it open and it accessed the car park without a code, I was stoked! I went up until I found the angle I wanted and managed to shoot it just how I imagined. The stealth mission was worth it in the end. 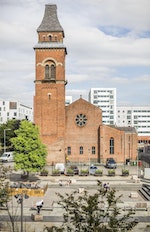 Aiden Blaymire – beanplant, Leeds.
When I moved to Leeds (around eight years ago) I stayed in some halls just down the road from this recognisable sculpture on the side of Leeds University’s engineering building. This was always visible in the background of most footage were people skated the ‘L Ledge’ in many Leeds scene videos and I always thought it would be rad to shoot a photo where this sculpture was visible in the background. People have always eyed up the ‘bumps’ on top of the building too. They used to be concrete but recently got resurfaced on top the concrete with a plastic-type surface.
One day after skating Hyde Park Skatepark we ventured into town, which usually involves passing this building. At the time there were builders working on it and there was scaffolding surrounding parts of the building. The scaffolding happened to lead up to these ‘bumps’ and Aiden was curious to see if they were skateable. He got up there and found a skateable one with decent run-up/run-out. It was another quick mission and he manged to do some beanplants on the roof. On the last attempt builders from the scaffolding shouted at him but he did the beanplant and rolled away. Aiden got down and we walked past the builders where they gave us a few jeers…I think they were secretly stoked. This is one of my favourite photos I’ve shot since being in Leeds. Props to Aiden for have a gander up there! 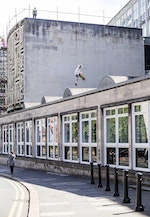 Battle of Hastings 2017 – Source Indoor Skatepark When the concrete curves of Boyley Park first replaced the rotting old wooden skatepark in Hastings, for a...

Anyone who has been to Solid Surf will know how gnarly it is to do anything in the pool or the U-pipe, and TNT's transfer...

Barney Page's full section from the 2015 Sour Skateboards video 'The Sour Solution', filmed on the streets of Barcelona and beyond...