It was probably Korahn’s call that swung the location for this trip. He had already been to the island of Sardinia on a previous mission and knew Cagliari local and Nike SB Italy rider Luca Doneddu, who proved himself to be nothing short of a fountain of Sardinian spot knowledge. After confirmation from A Brief Glance magazine head honcho Davide Biondani that Cagliari was indeed a banging location for skateboarding and Luca was a quality dude, I was sold.

We would usually rock up at Luca’s house in the morning each day before driving to a different part of Cagliari or elsewhere around the island; it turns out that, in contrast to our pre trip expectations, Sardinia is actually a huge place. Our journey up north to Nuoro took all of two hours but was well worth the mission. After sessioning a few sick spots though, we were forced to press eject. Mark wanted to ollie a rail outside what looked like the Nuoro law courts when his board shot out and collided with a parked car, all of which was witnessed by an angry on-looking local. The guy took it upon himself to check the ‘damage’, began shouting at us then got out his phone to call the police. Anticipating where this situation might be going, we headed for the van. Unfortunately, the van was also parked in sight of the now quite irate man, forcing us to walk straight past and pretend we didn’t know the rest of the crew to avoid dragging everyone else into the situation. Once we were safely round the corner and out of the guy’s sight, a quick call saw Korahn step in as the surprise new van driver (if Europcar asks, he was definitely on the hire agreement), and after getting a very quick pick up a couple of streets away, we powered back to Cagliari with many a shifty look over our shoulders.

A Cagliari spot where the crew spent a good amount of time was a kicker over a bench on the edge of the old town. Unfortunately all the benches around the kicker were pretty much welded to the floor, so Luca went off to scout one we could drag into position. He soon came back gesturing to a building across the road, but it turned out that the bench was actually on a building site up at the top of about sixty steps. Not only that but the weighty cast iron construction took three of us to carry, so by the time Luca, Rye and myself had the bench in position for the crew to start sessioning, we were sweating like we’d just found a horse’s head in the bottom of our beds. Thankfully our graft was rewarded as Jed, Mark and Dom got some sick clips.

Jed’s #GanjWax was applied liberally to Sardinia’s vast array of blocks during the trip, facilitating many a buttery truck and marble edge union. Check the GanjWax hashtag on Instagram for Coldwell/Manchester skateboarding induced comedy via his quickfire skate edits.

Thanks to Luca Doneddu and the assembled crew for the laughs. Have a watch of the edit from the trip and consider sampling some Sardinian sunshine.

Mark: This spot looked pretty promising when we got out of the van, but as we got closer and starting eyeing her up I realised this scorpion wasn’t for me. Jed, however, decided to kickflip over her about seven times.

I guess he wasn’t bothered about her lethal sting, nor was he bothered by her mate Mother Nature who insisted on blowing at him head on the whole time we were there. Check that catch! Matlok: The first thing worth mentioning about this bump to bar is the beige cheese grater of a run up that Josh had to endure. He was literally taking the run up from across the street to handle this bad boy…

Nevertheless, he charged it full pelt, popping it every go until he pulled out this major crowd pleaser for the boys; no GanjWax necessary.

Korahn: If you look closely at this pic you will see that the star of the show isn’t actually Padlock Bennett-Jones who has been placed so wonderfully on the brick wall, but it’s the green block of GanjWax that has been placed ever so elegantly on step number four.

If we didn’t wax the bottom step for slappies then he wouldn’t have landed this wallride nollie. 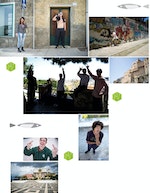 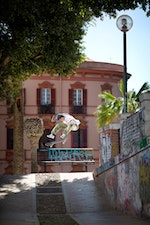 Jed: The excitement of Dom’s first GanjWax package had him more than eager to put it use and prove himself further to the TM. He wasted no time in caking the back of this neck high bench in luminous performance grease. Worried about the consequences of grinding or sliding such a potentially lethal ultra slick secret formula, he decided to backside flip straight over it with ease, ensuring boss status in doing so.

Dom: This was my first time meeting the Stern and I quickly discovered that he has both quick feet and a lot of energy. He wasted no time combining these attributes on day one to conquer this jump-jump-jump-bonk situation with trademark finesse.

Mark: Being the CEO of Ganjwax and director/producer of many promotional Instagram clips during the trip, you’d have thought that Jed would have had his hands full. I reckon it would be hard to find another CEO busting out tricks like this, don’t you? Jed puts his skating where his wax is via a front shove nosegrind revert. Steez! Korahn: Shmatty exits the stage in style after performing a smashing rendition of ‘Push It’ for the Cagliari locals (originally sang by Salt-N-Pepa). If you want to see more of Shmatty, then head over to Ollie Lock’s Instagram (@ollielock) to see him performing the smash hit ‘Three Dub Heels In A Row’ at London Am for his adoring fans (originally sung by Billy Lee Kerr, The Dubz Heel Kid).

Shout out to the GanjWax for keepin’ it slippy! 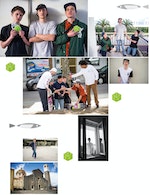 Matlok: Stern and the fifty of doom. This was gnarly to watch for sure. Aside from the crew of local Sardinians with their dog (who enjoyed barking frequently as you were about to pop), Mark also had to take on this ledge, which was pretty unpredictable to grind, and also deal with the backside 180 off into a narrow ride out. After giving the ledge a good old layer of GanjWax he managed to roll away unscathed. Props Stern.

Josh: Found congregated on the run up to this spot were what I can only describe as the local hash dealers in dodgy tracksuits with slick back hair and fake Gucci shit flickers, but Jed aka the CEO of the GanjWax empire, handled business in a short matter of time and escaped the scene unharmed.

With Leo on the lenses, send for your best man innit…hi Jed! Jed: Josh was someone I had been considering as a potential future rider since the ‘Ganj Crop Riot’ back in ’09. Seeing the way he waxed this stubby waist high wall with a pencil thin run up reminded me of myself when I was his age, looking for a challenge, not a care in the world, hungry to wax. His waxing technique was impeccable; I’d never seen someone get so much on to such a small surface area. Everything went according to plan as he powered out this backside nosegrind revert to head high drop, firmly sealing his spot on the team in the process.

Josh: What can I say that hasn’t already been said before? Everybody knows how much of a machine Korahn is! I was standing with Leo at this spot and he said to us “oh, I think nollie back noseblunts are my go to…” He then proceeded to bash one out but with a nollie heel into it – further proof that the artist known as Kaygeezee is an absolute boss.

Dom: In a show of real grass roots team management, GanjWax CEO Jethro Coldwell went to town on this frontside flip and taught his riders a lesson in perseverance and the importance of getting down and dirty – kind of like that TV show ‘The Secret Millionaire’ but more thug.

Our local mate Luca must be thanked for making this spot operational after an extended quest to source a moveable bench, which ended up needing to be dragged from atop a hillside a considerable walk away.

Jed: After being dropped from the GanjWax squad for backchat prior to the trip, I decided to give him a trial period in a foreign territory to see if he could clear his head. With a lot to prove and terrified of the prospect of being traded in for a newer model, Matlok took a deep breathe and perfectly executed this near impossible kickflip wallride on the crustiest ditch in Sardinia.

Needless to say, Matlok secured his place back on the GanjWax team, and remains to date one of the most valued professionals on the company.