I awoke on the morning of Dean Lane Hardcore Funday, on Ryan Price AKA Clev’s sofa, with the sun burning spears through my desiccated eyelids. The night before had been a much grimmer affair weather wise, not that that had stopped multiple skaters from Bristol, South Wales and surrounding areas from sacrificing themselves to Skatan on the altar of the sodden pump track which lies next to Daveside DIY. The session to mark Fifty Fifty’s 20th anniversary wasn’t going to be stopped by a bout of shit weather, though it did force my hand into starting drinking good and early. I crack my first can while a hastily dug up kicker ramp is sessioned onto what basically amounts to hard packed gravel. The Bristolian youth are going in, with a fair few older heads risking skin grafts in the name of searching for Chin. Eventually the attraction of the kicker wanes and gazes turn to the pump track – which don’t get me wrong, is one of the most fun things I’ve ever skated, but is also under a good couple of inches of water. This is no deterrent for many, with the likes of Jess Young, Josh Arnott, Frankie Derby and Ollie Lock going for it, taking some solid slams and in no time at all becoming mud reproductions of a Jackson Pollock canvas. After a banging BBQ, as well as a raffle with proceeds going towards SkatePAL, the crew dispersed into the drizzle and onto the city’s many fine drinking establishments. Multiple beers and jagerbombs, various bars, a near fight with a DJ and one arrest (naming no names) later, plus an all too short amount of kip, found me waking up and starting the challenging task of caffeinating myself back to life. 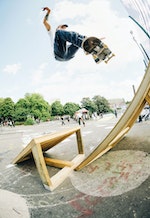 Luckily, Dean Lane has a habit of sharpening you up fast – something to do with the cheese grater floor crying out for flesh, perhaps, or maybe the fact that if you don’t watch your speed then you find yourself hurtling far too fast at something way gnarlier than you planned on your trajectory taking you. The yearly Dean Lane Hardcore Funday had arrived, which was why I was only one of many skateboarders trying to terrify the booze from their pores and reach an even enough keel to start drinking again for the day.

The Funday has all the vaguely anarchic levels of fun you’d hope for from this kind of event, with the sizable layout of the park offering various sensory treats as you progress through the park. Reach the top, there’s someone already passed out on the grass at 3pm. Further down and here’s Josh Arnott killing the rail, followed only a few metres down by the sight of Grim, fronting his band covering ‘Beat on the Brat’ whilst bouncing his daughter on his knee.

Stopping here for a minute to capture the moment on camera, the corners of my vision see Joxa chuck a rock fakie up the big bank to wall. I lost sight of him for some time and by the time I find him and ask for a repeat for the camera, he claims that he’s too waved – so you won’t get to see that one when the edit drops, you’ll just have to use your imagination, which is what we had before Instagram, Facebook and other such strange detritus of the 21st century post-industrial landscape took over that function. The bottom end, with the bowl and long quarter, is where the majority of the action ends up taking place. This is Ryan Price’s territory and huge frontside airs, lengthy grinds and general charging are all offered up whilst barely breaking a sweat. A properly shaped andrecht on the turret doesn’t even take him too much time to nail down, getting the biggest cheer of the day in the process. Joe Habgood throws down the usual powerful, rail smacking carnage on the long quarter and eyes up a ride on, melon off wallbash fakie on the railing which I’d very much like to see go down at next year’s event. Pete Carron rags a noseblunt in off the gnarliest thing he can find, swigs Stella mid-back smith grind and generally provides hypeman duties to a tee.

As the session winds down then Phil Parker gets into gear, making all of us nostalgic for the ‘Best Kingpin Ten Tricks Edit Ever’ (undisputable); front feebles and back tails are thrown down with as much style and power as ever.

We head back up the hill to see what is The Broken Bones Gentleman’s Club’s last ever gig, a band who will be sorely missed from the Bristol hardcore landscape and who put on a solid show as always. At 7:34pm, I finally manage to crack my first beer of the day. Long Live The Deaner! 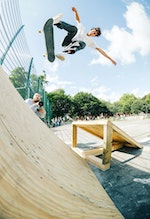