A Dickies European Skate Tour featuring Isle Skateboards and New Balance Numeric rider Tom Knox will be hitting Hampshire this weekend, heading to Bored of Southsea on Saturday the 7th of July, starting off at the shop at 12:30 before heading on to Milton Skatepark for a demo as well as a skate jam featuring best trick and highest ollie jams, death races and games of S.K.A.T.E.

Judging by the footage from last years spring jam organised by Bored of Southsea, the plaza-style park should offer up plenty of opportunities for Tom’s quick footed skating and we imagine this session will be a banger – throw in music, free pizza and an after party for those old enough at The One Eyed Dog in Southsea (177-185 Elm Grove, Portsmouth, Southsea PO5 1LU), and you have a recipe for a solid day out on the South Coast. Scroll down past the flyer to check the rest of the dates on the continent, in case you happen to find yourself near another one. 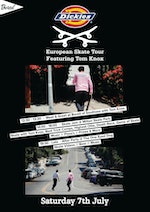 “The Dickies European Skate Tour is setting sail this week, the tour which features Dickies and Isle Skateboards pro Tom Knox is visiting independent skate shops all over Europe throughout July.
The third stop of the Tour is at Bored of Southsea on Saturday 7th July. The day kicks off with a meet and greet at the store with the the man himself before heading off to Milton Skatepark for a Jam and demo from Tom. Expect pizzas, music and of course plenty of prizes to be won!
To top the day off there will be an after party at The One Eyed Dog, where there will be more music, beer and skate videos.”
Tour stops:
5th July 2018 – Nozbone, Paris
6th July 2018 – Rufus, Barcelona
7th July 2018 – Bored of Southsea, Southsea
12th July 2018 – Xdouble, Innsbruck
13th July 2018 – Independent Outlet, Amsterdam
14th July 2018 – Arrow and Beast, Stuttgart
20th July 2018 – TBC, Scandanavia

All hail Southsea and its proactive skateboard community!

A peek at a few pieces from the Dickies SS18 range

A peek at a few pieces from the Dickies SS18 range