It’s been a busy celebratory season down in Southsea (or up if you live in the sea) with the UK Vert Series Shut Up and Skate contest, the concrete makoever of the Southsea bowls courtesy of The Duffnell Project and, of course, the celebrations held by local SOS mainstay Bored of Southsea. In the spirit of completism, it would be remiss of us not to add Bored’s voice to the collective cheer so, thanks to the pen of Toby Taylor and lenses of local heroes Paul Gonella and Paul Scott – here’s their take on it. All hail Southsea and its proactive skateboard community!
For more on recent Southsea happenings, go here to peep a feature on the Shut Up and Skate contest and here to find out more on The Duffnell Project and their renovation of Southsea’s original concrete features.

A few weeks ago our very own Southsea Skatepark saw it’s 40th anniversary, with celebrations taking place throughout the weekend of the 16th and 17th of June. There was a series of comps running over the two day event, with the Shut Up and Skate vert contest, Snake Run slalom sessions, a Bored of Southsea game of S.K.A.T.E, Strong Island miniramp contest and best trick jams. John Nicholas and Dread City Skates set up an old school memorabilia display that featured loads of incredible shots from the skateparks golden era, with local legends like Mark Abrook, Barry Abrook, Gary Lee and Sue Hazel as well as a whole host of visiting US pros, vintage boards, magazines and equipment. 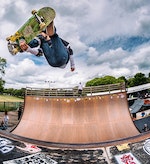 For those who don’t know Southsea Skatepark is one of the oldest surviving skateparks in the country, starting as a rollerskating rink under the bandstand in the 1930’s. Then as a result of the skateboarding craze hitting the UK in the seventies the local authorities added a series of bowls, moguls and a snake run and officially opened its doors in June 1978.

Over Southsea’s four decades in existence the park has hosted some of the worlds most iconic and best skaters, as well as legendary tours and competitions like the epic Bones Brigade tours and Shut Up and Skate competitions of the late eighties and early nineties. Names such as Tony Hawk, Steve Cabellero, Lance Mountain, Mark Gonzales, John Cardiel, Tommy Guerrero, Jeff Grosso, Ed Templeton, Tom Penny and many more have visited the park over the years.

Also adding to the festivities was the re-opening of the Spoon Bowl which was one of the skateparks original features, but had additions made to it back in 1990 that have since fallen in to disrepair and deemed it unuseable. That was until locals Sam Tuffnell and Dan Dyer took on the incredible task of returning the bowl to its original form, with only a handful of old photos to work from and all done in their spare time. Good work lads. 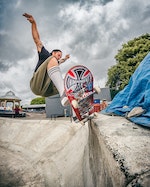 The Bored of Southsea game of S.K.A.T.E saw a win for Matt Treese, while Carlo Anderson and Callum Kenny came in runners up. In the Strong Island miniramp comp local boys Matt Grey and Kyle Fletcher were amongst the winners that walked away with the booty.

All the skaters that entered events really smashed it, and it was great to see all the people that came down to spectate and show support. We were really stoked to be part of the celebrations and very proud to see that Southsea Skatepark is still an important part of UK skateboarding four decades after it first opened. 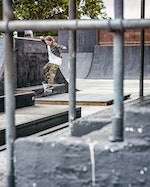 For all things Southsea-related – give Bored of Southsea a shout – they are shatter-proof rulers.
And, if you’re in the area – get down to the store this Saturday (July 7th) from midday to meet and skate with Dickies ambassador Tom Knox, with a jam planned for nearby Milton skatepark in the afternoon. More info on that Tom Knox Dickies appearance here.

Check out the A-Group, B-Group and Masters footage and get inspired to pad up and hit your local vert ramp.

A Dickies European Skate Tour featuring Tom Knox will be hitting Hampshire this weekend, heading to Bored of Southsea on Saturday the 7th of July.

The Drawing Boards Campus Lock In Session sees Ad's crew make the most of an after hours session at Bristol's indoor concrete fun zone, the...