The DC Takes UK 2018 Tour has just touched down in the UK, with demos and signings planned for Bristol, Brighton and London over the next week or two. In the van will be Wes Kremer, Tiago Lemos, Madars Apse, Tristan Funkhouser, Jaakko Ojanen, Josef Scott Jatta, Thaynan Costa and John Shanahan, which in our books guarantees good sessions at each leg. The Bristol leg sees them at Fifty Fifty before heading to Lloyds and Brighton both The Level shop and skatepark, before culminating in a release for the OG Lynx shoe at Slam City Skates followed by a session at a pop up park being built next to DC’s headquarters at The Old Truman Brewery on Brick Lane. This will also involve a cash for tricks jam, an exhibition on the history of DC and live music, making for a solid Saturday out in East London. Ingest further details below and get to one (or more) of these legs if you can! In the meantime, hype yourself up by scrolling past the flyer and finding Tiago Lemos’ DC Promo part… 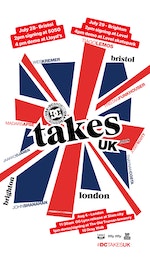 “The dates are set, so get ready because the DC Shoes Skate Team will be descending on the UK for a packed 2018 skate tour. Touching down on the 26th July, watch out for them on the streets of Bristol, Brighton and London where they’ll be hitting all the top skate spots and core skate shops, before heading to East London for a massive takeover in the centre of Shoreditch.

This epic ten day tour will culminate on the 4th August with a full on invasion of the Old Truman Brewery for ‘The Taking’ London. In conjunction with DC’s Yours for the Taking campaign, they’ll be creating a one-off park setup focused around a massive black-cab-gap which will be open to local skaters, with demos from the pros and a classic skate jam plus Cash for Tricks comp. The event will also feature a unique exhibit exploring the history of the brand’s skate and streetwear fashion heritage – back to the days of Droors Clothing – followed by an exclusive gig in the evening from Mancunian hip hop artists, Levelz.”

DC Shoes presents The Taking, London, which will see a cash for tricks jam, demos and an exhibition at the Old Truman Brewery on August...