Youth of Today – Harry Townend
Ever wondered what the skaters out there paying full-price for their skate product actually like?
We know you assume that you know what they’re into but what we’re asking is, do you actually know?
No? Well get ready to find out as we begin a new series of features with regular skaters on the streets to find out what they’re into, what products they pay retail price for and why.

If you’re lucky enough to work in the skate industry, or to be sponsored, then it’s skaters like these that allow that to be a reality. All hail the average Joe, (or in this case, ‘Harry’).

Where do you live?
Morley, near Leeds.

How long have you been skateboarding for?
About 3 or 4 years: I was about 9 years old when I first started skating.

Why did you start skateboarding?
Because my older brother Joe already skated and he asked me if I wanted to try it out. I liked how it looked; I thought it seemed cool. I tried it and I liked it. Most other kids my age who skated got into it because of computer games or seeing Street League or something, but I wanted to do it because of my brother.

How far away is the nearest skatepark from where you live?
About a twenty-minute walk. It’s an outdoor concrete park.

Is it any good?
No not really. It’s pretty sketchy – like actually dangerous to go to because of dodgy people.

Where do you mostly skate then?
Subvert indoor skatepark in Castleford. My brother works here so my parents know I’m safe. And they make me wear a helmet.

What was the first skate video you watched?
‘Pretty Sweet’.

Why?
Because I like all the skaters who ride for it, I like the graphics and it’s run by some of the most legendary skateboarders.

If you could’ve lived through the filming of any Antihero video, which one would you pick?
Tent City. Dunno about hanging out with Andy Roy though, even if he has turned his life around which makes him a role model I suppose. 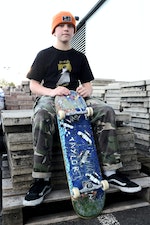 Why did you pick that set up?
I like Grant Taylor and the shape is good. Bones wheels are good for parks, which is what I skate: I’d had Spitfires before so I fancied a change. I like big wheels.

How would you describe yourself as a skater?
A transition skater: I prefer to skate tranny because I like the adrenalin rush of going fast. I like doing airs.

So who do you skate with normally?
People who are older, I do have a couple of skate friends my age but mostly it’s older skaters.

Where do you go to see new skate videos?
I try to go to skate premieres here at Subvert, if there isn’t one then I’ll buy the videos and watch them at home. I don’t nick videos off the Internet, I like owning them so I can rinse them to get hyped to skate at the weekend.

How often do you skate?
3 or 4 times a week at the skatepark, then every night on the slappy kerbs outside my house.

What is skateboarding Harry?
It’s like nothing and everything at the same time because it’s not a sport. It’s different to something like football because nobody can say that you’re doing it wrong. There’s no way to do skateboarding ‘wrong’.

You play normal sports too though, right? Don’t you play rugby?
I did but I just quit because I don’t like how serious it is.

Why do you skate an 81/2 inch wide board when you’re tiny?
Because I like how big boards feel.

Are there any brands that you would never buy?
Definitely Revive. I don’t think it’s a proper brand so I’d never buy anything they make. It’s not a proper skateboard company; they just got lucky on YouTube.

Who’s your favourite UK skater?
Div Adam. I’ve never seen him skate in real life but I want to.

How important is it to have a local skateshop and local skatepark?
Really important – you need somewhere to improve and feel comfortable don’t you?

Are you looking forward to being 16 and not having to wear a helmet?
A bit, it’s probably going to hurt loads though.

Have you ever been on a skate road trip?
No not yet. When I do though I want to go to Scotland and to Copenhagen. I want to go to CPH Open because all my favourite skaters go to it.

Have you ever met a pro skater?
Yeah, the whole Lakai team at Ramp 1 in Warrington when they did that demo. I got my old helmet autographed. 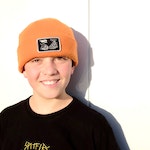 Here’s a little clip of Harry and his older brother Joe skating together to put this in context.
All photos by Farran Golding

Vans celebrates 25 years of the Half Cab

Vans celebrates 25 years of the Half Cab with two new colourways for Steve Caballero's long serving pro model - peep photos and the press...

Vans celebrates 25 years of the Half Cab