Weekends with Div Adam
We were in Scotland back in May where Div had joined us for a couple of days of sessions at Livingston Skatepark. At the end of our final day at Livi, Div declared:

“I need to get going, man. Got to be on site in Oxford for 8am tomorrow, building a park down that way for the next few weeks ‘til I go to Copenhagen”.

With Oxford being a mere 40 minute drive from where I reside these days, we hatched a plan on the spot for ‘weekends with Div Adam’ with him crashing at ours on weekends whilst the park was being built, so he had somewhere to recharge after being on site all week, skating on occasion and gathering footage and photos at the same time.

The park he was building turned out to be a Maverick job in Henley-on-Thames, which is on the other side of Oxford from here and can be gotten to in about an hour and quarter drive (should traffic be clear), but the added bit of distance involved didn’t end up altering our plan. Pretty much every Friday afternoon for the following two months, my phone would ring sometime around lunchtime:

“Waddup Geggsman? Leavin’ now, should be at yours soon…”

Div would roll up to our house in his beloved black Astra van, the tunes would be fired up and the fridge would be stacked with beers, then the next two days would be spent rounding up as many folk keen for a session as possible and heading off to skate as many parks and spots as we could, throwing in some camping, fires, booze and anything else that sprung to mind. Monday morning would come around and Div would take himself back to Henley, then on Friday afternoon he would reappear and we’d do it all over again.

The photos and video that resulted from these weekends with Div Adam that you’re about to immerse yourself in now do exactly what they say on the tin – this is what we gathered over a handful of weekends with Div; starting out in Scotland, ending in Melton Mowbray and visiting London, Bristol, Wales, Cambridgeshire, Hertfordshire and Essex along the way.

The original plan was to run an interview alongside all of this, but, at Div’s request, there’s no interview to be read here; he asked for Zeta Rush – who’s currently having time out from skating herself due to impending parenthood – to write about each of the photos from her perspective, as she was present for pretty much everything, keeping a watchful eye on Div from her faithful navy blue camping chair…

Anyway, without further unnecessary ado, I present to you ‘Weekends With Div’ – crack open a can of Strongbow Dark Fruits and enjoy… This vert ramp is around the back of my dad’s house. I’d only been there once before and the whole park was under water; this was the first time I’d seen anyone actually skate there. Watching Div skate vert was something else; it was like watching someone skate street, but on vert. He does all of his grinds like he’s skating street; he properly stands up on them.

He did this ollie a bunch of times and the trick made a sick noise because the coping sticks out quite far, so when his wheels bounced off of it they made a loud ‘thud’.

My dad and his wife Sharon came down with their dog Pepper to watch a bit of the session; Sharon felt bad because she kept shouting over all the footage, giving Div props. She was also really concerned that he wasn’t wearing a helmet. I told her not to worry; he’d already drunk four cans of Strongbow that day.

Div was already trying this hip tailgrab when Horsley asked all the bikers standing on the platform to move as – when the sun came out – their shadows were obscuring the top half of the transition. On one attempt, one of the bikers went back to say bye to his mate just as Div dropped in; there wasn’t any time to get him out of the shot, but as it happened, Div was hyped on the one shadow of the solo cyclist and asked the guy to stay in position whilst he got the right tailgrab for the photo.

Is this technically a doubles photo? Yeah, I guess so. Doubles with E.T. We planned to go to Bristol this particular Saturday as Div’s set up flew into the lake by Caldecotte Ditch the weekend before, so he had to go get a whole new set up from Shiner. We spent all day at Dean Lane; we took Mark Stern with us so those two drank beers all afternoon in the sun, and Div effortlessly shot another photo on some haggard transition. That night we went camping at Camp Hillcrest; everyone drank more beers, Div gathered up all the spare wood from around the field and had a massive fire that was still going the following morning. Him and Mark stared at the homemade ‘Caveman Telly’ until the early hours. 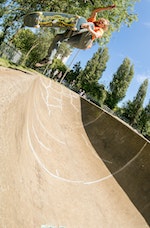 I missed this one as I had enough energy to walk to Primark over the road. If you look closely you can see my vacant camping chair in the background. Looks like he jumps pretty high too. Nice.

Oh, I was there for this one. I made it back from Primark empty-handed. He was trying to get the tailblock over the ‘w’ on the graffiti. He did this a bunch of times too; the one he was the happiest with was in a line where he tre-flipped a sort of hip first. That skatepark is pretty horrible.

There’s not a lot to say about this one aside from the fact it’s classic form on home turf. A mid session frontside air, higher than average in several respects.

NBD’s at Livi are few and far between and no one has taken this noseblunt down the infamous escalator before for one main reason; it’s fucking gnarly. As in ‘really fucking gnarly’.

Div had thought about doing this since he was 16 and chose this session in which to finally have it done with. He battled it out just before dusk and was riding away from it in what seemed like no time at all. To celebrate, he climbed into his van and undertook an overnight drive to Henley. What a beast.

KOTR's winning team hits Manchester for a sesh with the locals

Whether it's doing tricks on handrails that most people couldn't comprehend on a curb or fucking with the laws of physics on a ledge, Shane...