With this second collaborative project between the Quasi skateboard brand and Vans, Gilbert Crockett delved deep into the Vans archives to reintroduce a somewhat obscure silhouette, originally released back in 1994.
I think that I can vaguely remember seeing this one at the time but 1994 was a heavy year for soapbar so it’s possible I may be mistaken. Nonetheless, Quasi and Vans pro Gilbert Crockett is well known for his interest in vintage Americana and he’s come up trumps with this re-release.

Opting to upgrade key materials while preserving an original retro athletic aesthetic, the Epoch Sport Pro LTD brings a little-known heritage shoe into the modern age in a way only Quasi could. 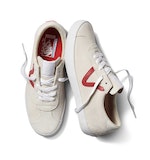 Led by Vans Signature Pro Gilbert Crockett and based in Dayton, Ohio, Quasi came to life in 2015 and quickly gained favor among the growing indie skateboard scene with bizarre graphics and a serious commitment to quality. From putting blotter paper inside decks to running ads with team riders on horseback, nothing Quasi does is ever expected.

The Quasi x Vans introduce the Vans Epoch Sport Pro will be available at select Pro Skate LTD accounts across Europe from March 24th.
For more info – head over to Vans.com

A banging 2018 collab capsule from Krooked and adidas Skateboarding

Blondey for adidas at Ponders End

World Premiere of NocturnUp Vol 2 at House of Vans, London