The Vans Shop Riot 2018 UK leg will be going down at Mount Hawke Skatepark in Truro on August the 25th and 26th, seeing the long running shop battle hit one of Cornwall’s longest running indoor parks for a weekend which is sure to see some heavy sessions go down; especially with an all expenses paid trip to the European finals in Madrid on offer to the winning team.

Check out last year’s UK leg at Rockcity in Hull and the finals which took place in Breda, Holland for confirmation of just how good this event is! 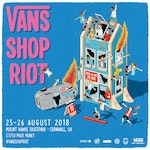 “June 16th, 2018 riots are expected to break out across Europe and last up until September due to the ongoing celebrations of the Vans Shop Riot Series 10th Anniversary.
Beginning in Germany and Portugal this weekend, before escalating across most EMEA territories including UK, France, Italy, Spain, Israel, Benelux & Scandinavia… the riots will further illustrate Vans’ ongoing commitment to the core stores and ultimately, the roots of the biggest individual success stories in skateboarding.
On a local level, each country sees the top shop teams rioting it out for one day in one of their best Skateparks. It’s a strict street contest. As for the competition format, it’s one vs the other in true riotus fashion and there can only be one winner! Then from a pan-European perspective, each countries winning team will qualify for an all-expenses paid trip to the European Shop Riot Finals.
For the past couple of years, we’ve partnered with a relevant Skate Artist on the creative execution. This year we  team up with UK artist, Phil Hackett. His clients include The BBC, GQ, Titus Skateshop, Friendship Skateboards, and many more. Phil has been skating since the early ’90s, and recently produced a series of illustrative books and prints based on this theme.  Phil says “ the chance to collaborate with Vans for this year’s Shop Riot has been a dream job to date, furthermore being given such creative freedom has made it even more enjoyable”.
Every year, the Shop Riot Finals are held in a different country. For 2018, we’ve partnered with Spitfire, and the finals will take place in Milan, Italy in early October.
Check out Vans Shop Riot for all the latest news and qualifying dates for the upcoming series.”