Seeking out unusual, eye catching and downright bizarre architecture to skate is one of skateboarding’s biggest pleasures – whether it’s the Death crew hunting down ‘Death Approved Spot’ UK crust in Squadrophenia or Bob Burnquist hitting natural transitions in the deserts of the US. Striving for innovation is as much a part of an architect’s make up as it is a skateboarder’s, so finding a building work or sculpture of an aesthetically striking nature which also has the bonus of being skateable is almost a sensory overload when hunting for Chin.

Here we’ve compiled some of the most eye catching spots which lay across the UK, taken from the pages of our magazine and featuring plenty of rippers with the necessary all terrain enthusiasm to deal with often less than perfect ground, kinks and the other handicaps invariably thrown up by the desire to escape the confines of your local skatepark.

This find came about on a 2015 Sidewalk and Rollersnakes trip to the Scottish Highlands, the rest of the photos from which we could have probably made up this article with. Luckily for you we’re not that lazy, but if you haven’t read it then we can highly recommend perusing it and wondering at what may lie in wait if you swap that annual jaunt to Barcelona or Copenhagen for somewhere more off the beaten track…

This long serving South London gem sprawls over a fair bit of ground and offers up plenty of lines for those willing to deal with badgers-arse ground (though recently resurfaced) and the fact that almost every part of it is gnarly as fuck. The tunnel next to it is long known from it’s appearance at the beginning of Stanley Kubrick’s A Clockwork Orange, while the main section has been skated by too many rippers to list off – but hats definitely tipped in the direction of Ben Raemers’ mental front disaster (Albion ender) and front blunt (enjoi’s Oververt) on the wall which had previously only seen tricks popped into the bank. Bradford’s Forster Square plays host to this iconic Yorkshire spot, alongside for a long time some whippy quarters until a recent renovation sadly displaced them. Much grimmer to skate than it looks, a cobbled run up and hard to figure out transition means that not much has really gone down here. Dougie’s floated backside air and Lois Pendlebury’s kickflip ender in her 2009 ‘As If, And What‘ section are two which immediately spring to mind.

Unlike some of the others here I have very little info about this spot, but Mark Baines’ ollie looks cool as fuck, doesn’t it? Those bumps in the foreground don’t scream out ‘walk in the park’ and I imagine they involve some kind of security, so they probably haven’t been rinsed much beyond this photographic gem… 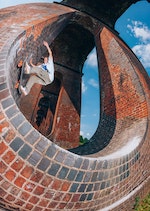 These viaducts are scattered across a couple of points in West Sussex, with each one in various states of skateability. Lucy Adams points her board frontside in her Sidewalk 225 interview where Stevie Thompson once scored himself a Confusion cover. Chris Bramall’s sculpture at The National Velodrome in Manchester is an example of ‘interactive sculpture’ – in other words it’s for public use and, as such, is skateable without fear of a kick out. Since it’s appearance it’s been hit by numerous notables, including Rick Howard who scored a cover with a kickflip fakie in Sidewalk 217, October 2014.

Danny Brady – gap to back disaster by CJ

This spot has long been known amongst skaters as the ‘London Flame’, but a cursory search reveals its actual title to be ‘Camdonian’, a 1980 sculpture by Barry Flanagan. One particularly vitriolic article I found equates it with ‘the 1980’s influx of the homeless and the destitute’, with the author making it clear that he’d happily see both people and sculpture out of site and out of mind. Knowing that, you can now appreciate it for not only memories of Scott Palmer’s incredibly tre fakie in the WFTW credits but also for the fact that it makes Daily Mail types almost apoplectic with rage!

No real story behind this one – it’s a bank spot in Cardiff which frankly looks like a nightmare to skate, but also makes for a banging photo…

Outside of Clev’s boneless in his Sidewalk 209 ‘Haunts’ interview, I can’t picture this West Midland’s oddity appearing in anything – anyone able to prove us wrong?

This derelict Little Chef on the A1 has seen plenty of action over the years, despite the treacherous slams it potentially offers up.

Jimmy Boyes is no stranger to getting off the beaten track and this photo is the first time I saw this spot. The ground is littered with cracks and stones, the bank is tiny and fairly steep and the wall is way out of proportion to what lies below – in other words, it’s horrible to skate. Shout outs to Conor Charleson’s recent assault on this particular piece of South London crust! 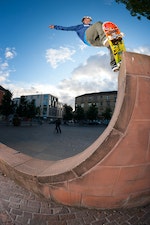 This one’s a Glasgow staple, if you can handle the varying level of abuse from the nearby pub that is. Fernando Bramsmark’s front piv all up in CJ’s lens on Nike SB’s 2014 En Route Tour is one of numerous tricks to go down regardless of pisshead heckling, which include a classic Ben Raemers backside boneless and a trick from Adam Paris which my brain cells aren’t quite willing to give up at the moment – perhaps a blunt fakie, perhaps not, you’ll have to make do with that! 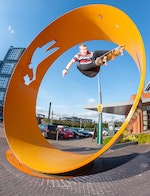 Unlike the previously mentioned Manchester fullpipe, it’s Wolverhampton brethren is not a permission spot so you can guarantee that any trick done here had to go down amidst livid locals and before the boys in blue made an appearance.

Apart from Mike Simons perfectly-pointed melon fakie here, Ryan Price threw down a backside boneless in his aforementioned Haunts and a few others have stepped up to snatch tricks in this beast. 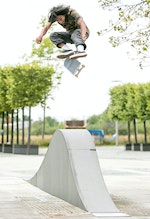 Even before the recent announcement that Hull Council was staking it’s claim as a city skateboarding hub, the place has always had plenty in the way of spots from the legendary tidal wall to various tucked away gems both in the centre and on the outskirts. Daryl Dominguez kickflips a skinny gem.

All hail The House Skatepark - Full edit and gallery live.