As we mentioned previously, additional to Lewis Royden’s gallery that went up yesterday, today sees Isaac Wilkinson‘s (AKA ‘Questions 2.0’) Wheels and Fins 2017 Official Edit of the UK Mini Ramp Champs held at Joss Bay, Kent make its way onto the Internet. For those of you out of the loop, Wheels and Fins is an event held on the clifftops and beaches of Joss Bay, near Margate in glorious Kent which mixes skateboarding, surfing, craft brewing, street food, box-car racing and live music in a novel way and has, over the last few years, grown in stature as a reliably fun event.

This year saw the long-standing UK Mini Ramp Champs event move to the Wheels and Fins Festival to take advantage of what was supposed to be glorious sunshine in a highly picturesque setting. Unfortunately, (although highly predictably), the weather tried its hardest not to play ball with intermittent showers across both days but with the help of a few squeegees and a large dose of positivity, everything still fell into place, even if the finals did basically take place during a mini hurricane.

You’ll find Isaac’s Wheels and Fins 2017 Official Edit of UK Mini Ramp Champs below this text, then if you scroll through Jerome Loughran‘s photo haul, you’ll find a little bit more information on goings on, who was there, who did what and the results. So without further ado, press play and pray for that last bit of sunshine before winter descends for good.

Myself, TV’s Marc Churchill and Jerome Loughran arrived on-site early on Saturday morning, prior to the gates opening, to be met by Paul ‘Karta’ Carter who had set the ramps up the night before for King Ramps.
After downing a pint glass of tea and spraying the flatbottom with logos of the appropriate sponsors (in this case Honor Smart Phones, Nixon, Vans and Skate Pharmacy), Jerome had soon cajoled Karta into flinging himself into the air courtesy of a low to high kickflip fakie. Early morning legs and dewy damp made this slightly more of a task than it would normally have been, but with numerous chants of “Come on! Do it for Bradford” acting like tiger balm, Paul soon had it in the bag, as you can see below. As always the Scots, (driven and corralled by Skateboard Scotland mastermind and general top human Ali Menzies) proved once again that they are more committed to the cause than pretty much anyone else in the UK.
Thirteen hours in a hire van to skate a mini ramp on a cliff is the kind of commitment that is sadly lacking from much of the UK skate scene these days, but if you can rely on anything, then it’s the Scottish skate scene.
Aaron Wilmot, Kieran Menzies, Needle and a couple of other heads whose names escape me now, came, saw, and conquered. Big respect. Format-wise, the comp was split over both days with Saturday seeing Qualifiers with five heats run on a jam session format, followed by a best trick comp in the afternoon.
Saturday’s roll call of skaters encompassed everyone from local heads Chester Pegg and Tim ‘Backflip Tim’ Prescott, through to Scottish, Welsh and English visitors representing all the major non-lazy-as-fuck scenes in the UK. 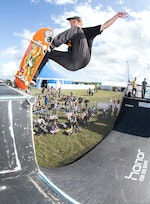 Both heats were pretty intense and despite the insane winds, (and in J Thaxx’s case a truly awful looking head bongo), the skating was pretty much world class as far as exciting and progressive mini ramp action goes.

Jordan Sharkey ended up taking the Best Trick Prize, returning to his native Wales clutching a one-off Nixon watch courtesy of an array of technical bluntery including blunt 360 flip out, blunt double flip out, and remarkably, blunt triple flip out resulting in a snapped board which Jordan continued to skate until he was left with nothing but trucks.

After the judges had stared intently at the seemingly meaningless mass of scribbles in their hands – the Final cut came down to Carl Wilson, Trev Johnson, Alex Hallford, Sam Pulley and Jordan Thackeray who went head to head for 25 minutes in what must’ve been a category 2 storm producing one of the most exciting bits of mini ramp skating that I can remember seeing in a long while.

All five went in, with Pulley’s consistency and front blunts on the 10 foot extension scoring highly, Trevor Johnson’s coping magic and Carl Wilson’s lines which covered the entire ramp landing them in third, fourth and fifth respectively. Not many people can pull this one off and make it look good. J. Thaxx running the Tony Hawk special with proper form. Backside stalefish. Photo: Jerome Loughran

It was undoubtedly the weekend of the Lovenskate duo of Alex Hallford and Jordan Thackeray who shredded every corner of the ramp complex, mixing huge airs of every variety with late shove-it variations, head-high kickflip melons and, especially in J Thaxx’s case, tricks literally invented mid run.
Watching those two skate is always a pleasure and the scenic location and promise of locally brewed craft ale following prize-giving just made it all the more enjoyable.

When all was said and done, the top 5 looked thus:

All in all, a great weekend in a beautiful location with a steady crew of humans.
Hard to go wrong really.

Big knuckles to Dave and all at Wheels and Fins, Wilkin, Sam and co at Honor Smart Phones, Nixon, Vans, Skate Pharmacy and Nic Powley. See you all next year!

For the second time Stone Cold brought his Texas weather for Newquay's Broken Skull Challenge 2.0. More chaos was to be had, with some of...

"...mainly just being out with the lads in the streets skating is belta. Everyone knows that feeling, I just got to film some shit on...

Some vintage London footage for your Sunday (with smatterings of Bristol, Liverpool and elsewhere).

Endemic skatestore come through with a truly mind-boggling 'skatepark'