The UK Lakai footwear crew recently embarked on a little weekend jaunt down to Bristol to sesh the West country’s plentiful spots, hit up Campus Pool skatepark and generally razz about in a geographically relevant part of the country to coincide with the release of the latest Lakai Bristol skate shoe.

This trip also ended up being Charlie Munro’s final Lakai trip with him joining the New Balance Numeric team shortly afterwards (hence his non-appearance in the edit).
We’ve included Griff’s shot of Charlie switch front crooking off third at Lloyds as the cover image because it’s a banger and serves as a nice farewell to him.

Despite the rain (massive surprise there), locations on the agenda included the (almost) rain-proof M32 DIY, the tarmac pump track opposite Daveside, Daveside DIY itself, a smattering of street spots and of course, Bristol’s own concrete indoor skatepark, Campus Pool, to finish off the mini-mission.

Grey Sky Cinema’s own Rohum Pourtahmasbi was on filming detail, with James Griffiths on photo duties, the results of which you can see around these words. If you weren’t already aware of Bristol’s excellent Campus Pool skatepark then you can find out more via our recent Spot Check ‘Terrain Spotting feature here: Campus Pool.

Additionally, it seems appropriate to hype up Rohum’s (AKA Grey Sky Cinema) recent full-length film ‘Rolling – Without Footage It’s Fiction’ here too, seeing as he was behind the lens for this Lakai Bristol trip. You can buy or rent ‘Rolling’ via Vimeo On Demand if you haven’t seen it – it comes recommended by us.
Look out for more regional missions from Lakai in the coming months focusing on cities with UK Lakai riders and/or shops connected to the brand. 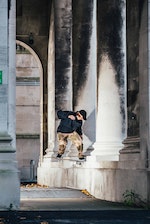 Announcement regarding the postponement of Skateboard England event