Aside from offshore banking, cattle and the fact that it had produced some pretty heavyweight skateboarding talent over the years, the island of Jersey had never really crossed my mind, until recently.

One Friday night in early June I had a call from Edd Martin at DC asking me if I wanted to accompany a handful of riders from the UK DC team on a whistle-stop mission to Jersey, putting on a demo at the skatepark in St Helier and hitting up as many street spots as time would allow over the course of a day and a half.

Having never previously thought of venturing over to Jersey, my mind was made up almost instantly; a little over two weeks later I was heading to Luton to board the 45 minute flight, en route to meet up with Cian Eades, Sam Pulley, Dylan Hughes and Tha Heartbreakers (that’s Nicky Howells and Dave Snaddon, in case you were wondering…), with Leo Sharp on hand to shoot the photos and Edd taking care of anything logistics based. Red from Shiner was also in the mix for the first night as he’d taken the weekend off to go to Glastonbury Festival but didn’t end up going, choosing instead to spend £235 on a flight to Jersey to spend one evening with the crew, sleeping on the floor for good measure.

Our accommodation for the two nights was an interesting piece of architecture on the coast named Lewis’ Tower, built in 1835 to defend the island from French attack. The place has no running water (though there are public toilets a few feet away) and no real beds, though Edd managed to talk the company he hired it from into sticking some camping beds in there for us. When we arrived the beds were covered in blue tarpaulin, giving the main room of tower the appearance of a morgue. I’ve got to be honest, it was one of the more unique places I’ve ever stayed during a skate trip; it was kind of like camping but with a wartime edge.

Anyway, here’s a rundown of (almost) everything that happened…

Those with a keen eye for seven-ply history might recognise this slab wonder from the pages of Skateboard! Magazine back in 1990, when the legendary Chuck Dinkins randomly found himself in Jersey and returned home with an epic photo of a layback carve on the thing.

This ‘Dinkins Bank’ was the first spot we went to after the Sunday morning demo; Sam did a few cannonball’s into the bank first then talked himself into committing to this taildrop first try.

“Oh don’t fucking think now, it’s not the time to do that…just fucking send it…” 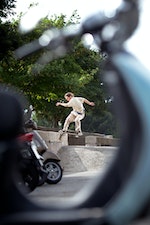 You know Luka; he’s been killing it on his skateboard for years. He’s probably filmed a section in your town without you even knowing about it, skating spots you walk past every day and never even give a second thought to. Unfortunately he’s been on the injury bench for a while now with a dodgy knee so he’s been mainly keeping things local in Jersey, documenting any and all skateboarding that happens to be taking place whilst occasionally getting a roll in himself, when his body allows. He chose his moments wisely to skate whilst we were over, putting the camera down for just long enough at this rugged ledge to bank spot in order to treat the thing to a perfect switch tailslide, obviously coming into the bank switch for those bonus steez points. The skatepark in St Helier is long overdue a facelift; as you’ll know if you pay attention to Instagram or any of the regular edits that find their way out of Jersey, this thing has been given some serious hammering over the years, and the tired and weathered existing setup is more than deserving of a much needed concrete overhaul. Still, for the sake of the Sunday morning demo and getting the collective crews legs going, it served us well; almost everyone stacked clips, and the strong gathering of locals joined in to keep the session going for a good couple of hours. The Hammerhouse was firmly in the mix from start to finish and kept charging at this backside smith grind until Leo finally managed to snap one in which no one else was in the shot. No mean feat for a packed out Sunday morning skatepark session, as I’m sure you can imagine.

Luckily Fosters can cure RSI. Or so I’m told anyway… 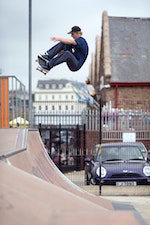 Another one that took a good few attempts before Leo was happy – Carve Wicked CEO Sam Pulley hoists an isolated frontside air into the Sunday morning sky, whilst a confused Red from Shiner presumably stands just outside of shot signing DC posters for the youth.

DC OG Dave Snaddon may be working behind the scenes a bit more these days, but he certainly still handles his own when it comes to chucking his plank about. This gap to noseblunt went down at the end of the Question Mark session, and at the end of day in which Snadz had shot two solid photos and banged out some crowd pleasers at the demo. He’s never been afraid of putting the graft in and I don’t think that’s going to be changing any time soon either.

Nicky really put in the work for this one; sometimes he would get into a front nose, sometimes the ledge would stop him dead, sometimes he would come off the grind early and miss the top of the bank…after sailing away from the one where everything seemed to align, Leo dragged a bin across the carpark, declared he’d found the perfect angle for the trick and asked him to do it again. Good work Nicky, it might have been a mission but all the effort was more than worth it.

For years Nicky has enjoyed calling Snadz ‘The Sloppy Giuseppe’ but there’s nothing sloppy about this one, I’m sure you’ll agree. Locked in mid-session backside tailslide.

Dillon is a Jersey local who you may have seen popping up in any number of places recently – in fact, he flew back into Jersey on the Saturday night after taking his fine eye for spots on a mission around South London filming for the latest Serious Adult edit, the fruits of which are out on the world wide web right now.

This spot is known locally as the ‘Question Mark’ for reasons which I’m sure you can quite easily guess, and it saw a handful of firsts go down over the course of our brief session, including this tricky ollie over to backside lipslide from Dillon.

Dylan’s first outing to Jersey was far from a smooth one. Having overindulged on the first night and finding himself embroiled in an altercation with a St Helier bouncer who the locals ensured us was a grade A knobhead, Dylan spent the majority of the second day chasing off a demobilising hangover. The final thing on the agenda for our day was a game of SKATE with the locals at Watersplash, though as we were about to leave town to drive to the coast, Snaddon stumbled upon this wallflower and set about trying to frontside 5050 the thing. Dylan’s hangover reduced itself to a level which actually allowed him to stand on his skateboard, and it wasn’t long before he was grinding his way through the backside equivalent to Snadz’ aborted trick. The floor that made up the landing out was near enough cobbled so riding away from anything on this thing smoothly was pretty much out of the question. After a few attempts that threw Dylan straight into the ground, he managed to cling onto one of them, rolling away with his feet at some bizarre angles but riding away nonetheless. All things considered, the fact that this 5050 went down is nothing short of miraculous.

A massive thanks to Eddie Da Rocha, Luka Pinto, Dylan Powell, Dillon Catney, Matty Noble and the rest of the Jersey locals for generally hooking it up and being all round legends. See you guys again soon!

There's nothing meaner than The Deaner. All hail the DLH!

Taken from the third full length Get Lesta production.