In advance of their premiere of Harry Lintell‘s Real Skateboards video part on Friday night, Slam City Skates presents the Real Skateboards Interviews. With Harry joined on the trip by fellow Real Skateboards heads Zion Wright, Hermann Stene, Jack Olson and Tanner Van Vark, there was plenty of different angles from which his new braids could be admired and discussed.

The interviews also cover the culinary high points of each rider’s trip alongside opinions on the UK – which, unsurprisingly, consist unanimously of “I’d like to come back when the weather isn’t absolute dog shit”. Or words to that effect. Despite the UK springtime putting on its usual spectacular display of mild drizzle for the majority of the past week, judging by social media the crew still laid down some serious skating – their twilight visit to Stockwell alone was a treat to watch and the photo of Tanner Von Vark’s ridiculous frontside take off at Bromley miniramp deserves to be in a magazine rather than consigned to the depths of Instagram.

Click on the portrait collage of Gabe Morford’s images below to find out what the trip has been like from the perspective of those in the van. 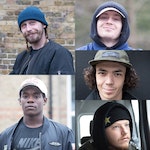 “We are stoked to be hosting the premiere of a new Harry Lintell part for Real Skateboards tonight at our East London Shop. Real have got behind this one and made a serious event of it. To build the hype they flew out Real family members to join Harry as he traversed some of the UK showing the video. Harry has been joined by Zion Wright, Herman Stenne, Jack Olson and Tanner Van Vark. He has been showing them around and we were lucky enough to catch up with them all in London over these short interviews before the video plays tonight. All photos courtesy of Gabe Morford…”

Full run down of the non-SLS skaters invited to Street League, London

Converse crew descend on London for the Purple premiere

John Cardiel's classic nosebone in the rain that ended up on the cover of Thrasher's November 1998 issue, Dustin Dollin back when he was still...

After its premiere across various UK locations backed up with a mini tour, Harry Lintell's Real Skateboards part celebrating his turning am is now online...