The British skateboarding scene plays host to many characters but none of them are better at motivational swearing than the one and only Mark Munson.
He’s been killing it for as long as anyone can remember and is a guaranteed force to be reckoned with, both on his board and the on the platform screaming at all and sundry.
In celebration of him reaching 48 years of age recently, Mark’s put together the edit you can see below to prove that old men can indeed still get some.
We love Munson and you should too, especially if you’re a fan of naughty words.
He may well call you a “fucking mug” as soon as he meets you but he doesn’t mean it really: in actual fact what he means is that you’re a, “total and utter fucking mug” but even Munson has to tone it down occasionally.

We collected some stories together from some of Munson’s closest friends and enemies which you can read below to get a sense of the man.
This dude lives and breathes skateboarding so it gives us great pleasure to give an insight into his universe.
All photos courtesy of Jerome Loughran – see more @jeromeloughranphotography 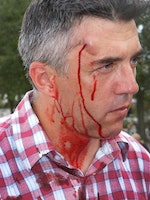 I have a lot of stories about Mark but for all the funny stories I could share with you, the one thing I want to say about and to him is to thank him for the gift of skateboarding and thank you for taking me under your wing.
You changed my life and for that I owe you a lot.
You’re still one of my favourite skaters and still absolutely kill it everywhere. There is no one better to have in a session than Munson, he will make you do stuff you don’t even want to do.

My earliest memories of Mark are seeing him round various parks in Essex nearly 30 years ago now, shouting his mouth off, usually topless: to be honest I thought he was a fucking nightmare!

Years later I got to actually know him and realised he’s not quite as much of a cunt as first impressions had led me to believe, maybe just a little too much testosterone or something. And whilst it’s never comfortable to be on the receiving end of the abuse, you probably deserve it; plus it’s always funny being a spectator and it’s definitely helped a lot of people land a lot of tricks over the years.

At the end of the day he’s always got his mate’s backs and if he’s doing anything you know he’s giving it 200% all the time, both admirable qualities in a human being.
To be honest the world would be a better place with more people like Mark, a lot of shit would definitely get done, although there might be more wars.

Mark Munson, well, where do you start?
The guy’s a prick! But a prick of the finest order!
A straight-talking, session-motivating powerhouse with a mean bag of tricks to back it all up with.
The first time I met Mark, well actually, the first time that I was shouted at by Mark, was at Urban Games one year. True to form he began screaming at me to do something that I really didn’t fancy doing, but he had such a persuasive way of bellowing (like a site worker on scaffolding), “Fucking do it to the other quarter you C**T” – that I felt I should oblige or take a bricky’s trowel to the head or something!
I instantly liked this guy and have know him ever since.
Having been on many trips around the world with Mark I can honestly say he’s one of the best dudes to have in the van! Always keeping everyone in stitches and firing up the sessions, Munson is an essential part of the squad!
YOU FUCKIN’ MUG! 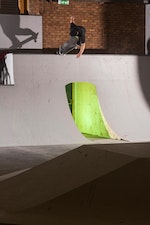 There is a common perception or stereotype of Mark Munson as some tough, loud, macho, dyed hair, fake tanned, muscle monster Essex geezer. Its not too far from the truth, but in the past few years I feel like he’s really blossomed as a member of society. He’s left the Playboy days of being a male stripper and ex-gladiator on the Polish version of the well know TV show behind him and has even stopped dying his hair and might even be laying off the sun beds a bit.

When I first met Mark in 2000 at Marseille, he had just come from a season snowboarding, (I knew who he was because I’d seen him in RaD Magazine before) and he had a weird reverse Panda tan due to his goggles. He shouted loads, threw his board, used the ‘C’ word too much and was ripping. I was terrified! I know people think he has an anger management issues, but as he told me ‘I don’t have an anger management problem, I can manage to be angry most of the time’.

As our paths have crossed over the past 18 years I have gotten to know a man who is actually calm, considerate, loving and the one thing he keeps in his heart is his love for skateboarding. Not ‘the industry’ or any of the other petty shit that goes with it, but the actually act of riding a skateboard and the thrill you get from it.
I don’t care what people think or say about Mark, if you’re still out there skating as much and as well as him when you’re closer to 50 than 40 then you can have a go at him.
Mark is an inspiration and a motivation to all of us. I think he has single-handedly made me land and taught me more tricks than anyone else. I’m still not sure how much of that’s through the fear that he might hurt me or that he might leave me in the middle of a foreign country with no passport or money if I don’t land it though.
But the threat is real! 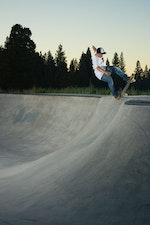 Munson is a one off. If you didn’t know him and witnessed him verbally abusing the young at a skate park, you could easily mistake him for being an abrasive thug, but his insults are designed to help, so any offense taken is merely a side effect.
He’s as quick to mug himself off as he is to do so to others, so he’s firm but fair.
His unique style of encouragement is partially responsible for Ben Raemers and Potter’s killing spree, and I’d say that bringing the best out in people, fused with his next-level sharp potty-gob, is part of what makes him fun to be around.
The fact he’s still ripping so hard in to his sixties is flat out inspiring. Well what can be said about the beast that is Munson?
Put aside all the stories of him being on a Polish version of Gladiators or some Essex Prince (all of which are true) and Mark is still a beast.
“There’s no point coming here if you’re not going to smash yourself to bits!” has been muttered many times by Mark. He is 110% committed to skateboarding, his son, his fishing brand Navitas and to mugging you off or shouting at you to land a trick. Everything is considered and with reason. He’s made me do some stuff that I never knew I could, and I wont be the only one that will say that.
But the guy you see in the edit and photos isn’t just some utter skate nerd, he’s one of the most intelligent people I know, he still rips, is more productive on skate trips that those 15-years younger than him and is still able to party into the small hours of the night.
They don’t make them like Munson anymore, which is a sad state of affairs for the UK skate scene. 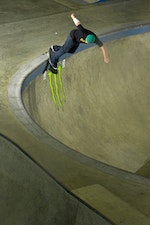 Munson is the best person I know at being a cunt, but somehow, no matter how offensive he is, it is always funny and he is still such a lovable character.
I spent a lot of time growing up with Munson on skate trips and it was always a laugh, with never a dull moment. The first trip I was on with Mark was a trip to Amsterdam; I was 17 and a lot of beer, weed and skateboarding went down. I have a lot of great anecdotes from that trip but one I will never forget is him egging on a skint Ian Rees to drink a litre of his own piss for €20.
Rees was literally retching (as were most of us) but thanks to Munson’s persistent – “Come on you cunt, get it down you, what’s wrong with you, don’t stop now!” Rees nearly managed it, leaving just a shot glass full whilst he threw up. In response, Munson called him a pussy and refused to give him the €20 because he’d not finished it all.

I think this kind of behaviour played a massive part in mine, and a lot of others skateboarder’s lives. I doubt that I would’ve landed half the tricks I’ve ever attempted if it wasn’t for Munson’s way of forcing you to do something.
Even if he wasn’t there his voice would be in my head screaming “What’s wrong with you boy, fucking land it you fairy, we haven’t got all day, get on with it!”
If you didn’t land something he’d make you feel like you weren’t worth having on the trip, you couldn’t get away with not trying, that’s for sure.
Those trips were always really productive because of it and it was all thanks to Mark. Thanks for the good times mate.

We talked to Charlotte Thomas, the woman behind 'Concrete Girls'