House of Vans have moved their March Girls Skate Night to Friday 9th March, merging it into a weekend of events celebrating International Women’s Day. The Friday night usual session will be followed by two days of workshops, talks, live music and, of course, skateboarding. Scroll down past the flyers for the full press release and details of what you can find at what times! 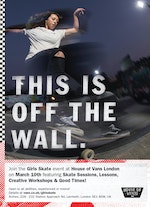 Living by its ethos of enabling creative expression, Vans aims to inspire a new wave of women’s skateboarding progression through a series of free global skate clinics and events, one of which will take place at House of Vans London.  From experts to beginners, Vans welcomes everyone and encourages the emerging women’s skate community to come together and celebrate creativity.
Launching on Friday 9th March 2018 with Girls Skate Night, girls of all skating abilities can hit the bowl and street area from 6pm with House of Vans tutors on hand to assist beginners.
The House of Vans cinema will host the European premiere of Girls Skate India, a film capturing the essence of the emerging skateboarding scene in India and the inspiration behind the latest instalment of the This Is Off The Wall campaign. An accompanying photo exhibition of images from the film will fill the House of Vans gallery space.
Culminating with a live gig from the electric singer/songwriter Suzi Wu, guests can enjoy cocktails on the house until close at 11pm courtesy of The Wall SE1.
The festivities continue on Saturday 10th March with Girls Skate Camp, part of a global initiative to inspire a new wave of women’s skateboarding progression. The first 50 lucky attendees to sign up via Vans.co.uk/girlsskate will receive exclusive access to the venue and the very first Skate Clinic from 11am – 2pm. Over the course of three hours they’ll partake in a skate lesson alongside Vans brand ambassadors and enjoy a complimentary brunch, gain early access to the creative workshops on offer and receive an exclusive Vans goodie bag.
At 2pm House of Vans opens its doors to the public and a further Girls Skate Camp will take place in the skate park. Tunnel 3 will be abuzz with a community market featuring independent brands and collectives. From creative workshops that include t-shirt making and poster printing to one-off design pieces and art to shop, the following will pitch up under the House of Vans arches: Brixton’s Baddest & Bowl Babes, Very Old Skateboarders, VC London, Nefarious Crew, London Girls Surf Club, Lizzie King, Suzi Kemp, Right 2 The Bone, IMARNI Nails, Hazel Nicholls Ceramics, The Great Frog’s Stacey Hare and Alexandra Turner.
There’ll also be open skate practice in Tunnel 5 from 2pm, mentored by pro skateboarder Stef Nurding along with a Skate Jam and Best Trick Competition from 4 – 5pm in Tunnel 4. Skaters will get the opportunity to show off their skills on the park’s obstacles and pro skaters Stef Nurding and Lucy Adams will be on hand to judge the contest.
From 2 – 6pm in Tunnel 2 the fantastic Lucy Adams hosts talks from inspirational guest speakers including Stef Nurding, Charlotte Thomas & Daphne Greca, plus there’s another chance to see the incredible Girls Skate India documentary film. NTS DJs provide tunes throughout on the main stage in Tunnel 3.
Skate Skool is Sunday’s focus and once again House of Vans tutors will be on hand to help guests perfect their kickflips. Not forgetting Mothers Day, House of Vans partners with local collective Skate Moms and provides free tea and cake for all.
Friday 9th March | 6pm – 11pm
Girls Skate Night
Live music from Suzi Wu
Saturday 10th March | 11am – 8pm
Girls Skate Camp
Community Market
Guest speakers
Skate Jam & Best Trick Competition
Sunday 11th March | 12pm – 6pm
Skate Skool| 12pm-2pm

Digging in the crates for the second Quasi x Vans release

This Thursday the 22nd of March, House of Vans London presents the launch of Wasted Talent Vol.2, a recently launched skate and surf publication.

World Premiere of NocturnUp Vol 2 at House of Vans, London

Transworld Skateboarding has uploaded their edit from the Vans Girls Combi Pool Classic 2018 to the web, offering a solid dose of transition gnarliness.