Ed Syder Hawk & Hosoi book – Kickstarter LIVE here
For those who are unaware of his previous work, Ed Syder is a comic book author, artist and skateboarder who has been producing work for well over a decade. Previously Ed Syder has released two books focused on the all-pervasive influence of two sets of skaters, firstly with his Natas Kaupas & Mark Gonzales book, followed by his second book focusing on Lance Mountain & Neil Blender. Additionally, Ed has released a number of comic books detailing his own journey through adolescence, (perhaps most notably in his first full-length book ‘My Skateboard Life’), along with various zines, artwork used by the likes of Royal Trucks, Foundation Skateboards, Emerica (to name but a few), plus a personal output encompassing everything from t-shirts to greetings cards.
With Ed’s recent announcement that he has begun work on the third (and sadly final) book in his skateboard heroes series, based around Tony Hawk and Christian Hosoi, we figured that it was a good excuse to sit the man down and chat a little about his own influences, his skateboarding life, and the numerous skateboard-related artists who will be collaborating on his currently in-progress Hawk & Hosoi project.
For more information on the many things that Ed Syder creates – visit his website: Ed Syder
To contribute to Ed’s Kickstarter to help make this project happen visit: Ed Styder Hawk & Hosoi Book.

Could you please give us a little background on your own trajectory in terms of creating graphic novels please Ed? I’m assuming that it is something that you pursued academically during your time at Liverpool Art School, right?

I didn’t start drawing comics until after my degree actually, I was really into making short films at art school but once I was out of university I found that I didn’t have access to all the equipment I was using there to make videos. My first zine was called ‘Nothing’, which was little more than a one page flyer.

Were you an avid comic book reader as a child?

Not really, I had some Garfield and Calvin & Hobbes books but I got more into them at university. I started buying Love & Rockets and Eightball at World’s Apart in Liverpool. This is around the same time that I discovered the whole underground comics thing (R. Crumb etc). I bought whatever I liked the look of. Skateboard graphics had already taught me what I was into. 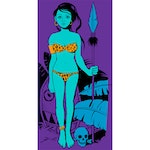 You’re originally from Cornwall and grew up skating in and around the late 80’s scene there, pre-roof Mount Hawke, etc so presumably your route into art was influenced by skate-related graphics you were surrounded by. Who were your biggest influences?

I didn’t know any of the artist’s names back then, but I was originally drawn to skateboarding by all of that V C Johnson art for Powell Peralta. Jim Phillips still blows my mind and all of the World graphics in the early nineties really got me going! I used to draw the Bones Ripper on everything at school and I definitely ripped off some Sean Cliver stuff for my GCSE’s! I actually entered the contest that Powell ran for a new artist in Thrasher. I still have the postcard they sent me back.

It seems as if there are some influences in the drawing style/story telling in your first book ‘My Skateboard Life’ – I’m not an expert but perhaps some influence from the Hernandez brothers in terms of the confessional narrative maybe? Or Charles Burns in drawing style perhaps?

Oh yeah, I can’t deny that stuff helped me a lot. I actually got “signed” by the book publisher before I’d even drawn any of ‘My Skateboard Life’, so whilst I was doing it I was reading more and more graphic novels, trying to learn as much as I could. I was also training to be a teacher at the same time, which didn’t help.

‘My Skateboard Life’ details your own journey through your teenage years as a skater in Cornwall and to anyone from that era with a keen eye there are loads of real life references – Ben Bodilly and Pin, Mt Hawke, re-draws of Vision graphics etc – how true to your own experience is that book?

It’s exactly as I remember it. Or at least how I felt about my youth at the time. I have a slightly different take on things now that I’m a bit more self-aware and understand what was influencing my behaviour. The book thankfully doesn’t include any of my, “rock fakie, tail tap, backside 50-50 and repeat” mini ramp runs.

I had to laugh too when you drew yourself listening to INXS, (presumably partly to locate it date-wise) only for that very same song to reappear in Supreme’s Cherry video maybe 20 years later. Equally, some of the comments re the emergence of female skaters and the ‘too cool to be friendly’ era seem as relevant today.

For a time back then, there really wasn’t any ‘skate music’ or at least none of us had found out about that stuff. With no Internet, you really were reliant on skate videos and older skaters to clue you in. Skateboarding wasn’t on TV so the music pages in Thrasher and the soundtracks to things like ‘This Is Not The New H-Street Video’ were all you had.

I don’t really skate with anyone nowadays so I don’t feel that unfriendliness any more although I’m sure it’s still there. I mostly go out on solo sessions but when I go to the skatepark it feels okay to not really know anyone. I’m a parent now, so it’s mainly a case of going out for an hour in the evening when my son’s gone to sleep.

I took the easy option back when I was 16 and the big pants little wheels thing happened. It really did feel that overnight a lot of people I skated with turned into lil’ bitches about which pressure flip you could do. So my brother and I just thought ‘fuck it’ and quit. I got back into skating about 2 years later when things seemed to have cooled down. You’re currently working on a Hawk & Hosoi book, which is to be the third and final of your 3 part skate hero influenced series – you’ve collaborated with lots of skater artists on the previous two, is that the plan with this one as well?

Yes, it’s the same open call to any artists, photographers and writers that want to make something inspired by these two skaters. I wasn’t going to do another one as the last one turned a bit sour for me when I got word that Blender was “bummed” by it all. I got in touch with Tony and Christian through the wonders of the Internet this time and got their blessing for this book. I thought I’d “go big or go home” for the last in the series.

The two previous books – Gonz & Natas and Blender & Lance are sort of simultaneously historical artefacts relating to the cultural influence of the skaters featured, whilst also being kind of re-writes of that influence through the work of artists influenced by them. Is that how you see the purpose/meaning of the books, or am I wildly off the mark here?

Yeah, that’s it, totally. Everyone who’s contributed has a story about what these different skaters mean to them and I’m really interested in how their imagery has influenced artists. People like Blender or Gonz have so much of a cultural resonance, not just to skaters. It’s great to see different takes on old graphics but it’s even cooler when someone takes an idea and runs with it. This guy, Chad Cardoza has made a birdhouse out of Tony’s old decks, a kingpin and an old 1940’s pitchfork. It’s insane.

Have you had any direct interaction with any of the people featured in the first two books? Knowing Lance Mountain, I’m sure he must’ve been stoked enough to get in touch at least, right?

My friend Larry got a copy to Lance, but it was at a funeral so he didn’t say much. Actually, I think he posted about it on Instagram afterwards. Natas emailed me, asking for a copy. It’s funny that these are the same people in all of those old videos we’d wear out watching and re-watching. Getting older feels very abstract to me.

So what kind of timeframe are you working towards for the third book and will there be any direct Hawk/Hosoi input into this one?

I’m doing a Kickstarter in September, so I’ll hopefully get it all out by Christmas. I’m trying to twist Tony Hawk’s arm into helping me get the word out about the book, but we’ll have to see what happens.

Which artists do you have involved already?

Some of the people that were in the last two plus some new people, Pete Hellicar, Steve Caballero was keen, Nathaniel Jones, Jay Croft… 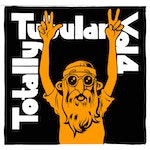 You have a Kickstarter set up to help make this project a reality – can you tell us a little about how that will work please?

I’ll be offering the book at a lower price than it’ll be after the campaign ends. There will be other rewards like patches, enamel pins and t-shirts, (all exclusive to Kickstarter backers). I’m hoping to be able to donate some of the money raised to the Tony Hawk Foundation.

Finally, I’d be slacking if I didn’t ask this – are you still skating at all today? If so, where?

I am still at it. Not that often right now, maybe every fortnight. I really miss the concrete parks in London and my time is pretty much taken up with life as a parent. I’m getting our son into skating though, so will hopefully become more active as he gets older. When I do go skating it’s either at The House here in Sheffield or just doing flatland and slappies around near my house. For more information on Ed Syder’s work and/or how you can get involved in the Kickstarter set up for the Hawk & Hosoi book – go here.

Daniel 'Snowy' Kinloch's full part from the excellent 'Static IV', filmed and edited by Josh Stewart and released in 2015.