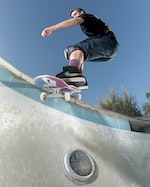 In honor of the Lance’s affinity for pool skating, as well as his appreciation for the Blazer since the 70’s, both silhouettes catch the spirit of 78/17 and are synonymous with Lance’s legacy in skateboarding.

The colour scheme reflects the 70’s-era prism-fades on concert posters, the tiles from Lance’s favoured pools and his own skate graphics.
The heel has a tile treatment and features a tile-like debossing, with “78” referencing the year
Mountain first remembers seeing the Blazer regularly in skate mags and the right shoe embossed with the number “17” to represent both the present day and a nod to the future.

Featuring a distinctive upper inspired by 70’s-era prism-fade concert posters this Lance mountain Blazer incorporates aspects of Lance’s own youth, inspired by the culture of the 70’s with an nod to the future.

“The colourway — the rock poster fade — is connected to a look that has been tied to me for some time,”
explains Lance. “I have used it on my board graphics, throughout my career.”

In addition to the upper’s colour scheme, this shoe also features the tile-like debossing on the heel
and nods to Mountain’s history, with both pool skating and the Blazer silhouette.

Part one sees him hunting for Bobby Valdez, inventor of the invert, and Darrell Miller - along the way speaking with Steve Olson, Neil Blender...

Whether it's doing tricks on handrails that most people couldn't comprehend on a curb or fucking with the laws of physics on a ledge, Shane...

Daniel 'Snowy' Kinloch's full part from the excellent 'Static IV', filmed and edited by Josh Stewart and released in 2015.