All photos by Joel Peck unless stated

We spend the morning and early afternoon of Thursday working from the hostel bar, drinking coffee and trying to avoid sinking into booze at an hour which would hinder us too much for the evening. Eventually heading out, we reach a gleaming white bank spot which hosts the first of today’s events. Heavy hitters are in evidence with Luan Oliveira, Bobby Worrest, Ishod Wair and more all working to clear the previous night’s cobwebs from their livers. My body demands a break from skateboarding, I am handed a beer and quickly decide that will be my days path while I watch things go down. When things break up and the crowds head for the next spot, we take the chance to session a perfect marble ledge round the corner. We eventually reach the SEB Bank, the spot in question, and I realise that gaining any kind of useful experience from the session is fruitless – the crowds prohibit much of a viewpoint, the judges are grating on my nerves and the prospect of watching a lemming session down a double set does not fill me with joy. My colleague heads down into the crowd for a better vantage point, but a quick evaluation decides me on heading out on my own. I crack another can and wander down the river, taking photos along the way as the sun glints off the water. This is where female company would be pleasant, something to counteract the testosterone heavy environment of the male-dominated skate world. I have no clear plan so head back towards our hostel, where a drunkard on a bench wants to clink tins. He asks where I’m from and I respond London, as my nomadic adult years do not translate well to those who don’t know the island from experience. He starts rapping about me being from London, telling me to “have a nice life journey”, and improves my day immeasurably. Evan Smith – kickflip I did not witness first hand

After a few minutes writing back at the hostel, a friend rings to say that they are at Christiania bowl. I grab my board and head across the river, finding the legendary autonomous zone easily enough and heading up to the indoor bowl. It is kinked, gnarly and offers many opportunities for injury. Half the crew are lurking on the balcony and taking the occasional run, while a local introduced as ‘Ginger’ tears the place up harder than anyone should be capable of in such unforgiving confines. Ben Schroeder sits in a corner, chilling and lighting up. After 20 minutes or so he gets up and drops in; axle stalls, rides out onto the platform, loops out and takes out a bin and some miscellaneous debris. “That’s how it has to be”, he mutters, before disappearing into the daylight. He is clearly someone who understands…

The vibes are good, although one of the older locals arrives upon hearing a rumour that one of us tried to buy some pills. He tells us in broken English that if we try to get anything harder than weed we will be not only kicked out, but also stripped and our clothes dumped unceremoniously in the canal. We have no reason to disbelieve him. The rest of the crew returns and we skate the DIY outside the bowl, dodging pedestrians to hit up the whippy QP against the wall. Tom Bailey and Dead Dave go in hard, with tailblocks being the trick school of choice. Later we head up to the Meat Packing district, the sun is setting as I skitch bikes back across the river. It’s hard to imagine this happening in London, not least because the city is well laid out to punish cyclists and because the ground is a gnarled and vicious bastard, waiting to come up and bite skateboarders and their puny wheels. 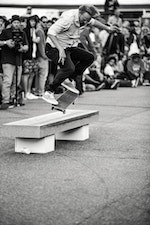 We catch the tail end of a big session at a curb/ledge/ledge set up, with Hjalte Halberg and Nassim Guammaz particularly worthy of attention. Once the skating is done, the drinking begins in earnest. I find myself in a corner with some Welsh, Scottish and midlands-based homies as things begin to get boisterous. Jake Collins and Chav Dan are blurring the line between joke and real fighting, Ben Devine focuses a board. The surviving boards are uniformly soaked in beer, and Aaron Wilmot takes a lit cigarette to the forehead in a scrum on the concrete. We are having more fun than the couples trying to have a romantic dinner in the restaurant we are outside of; one couple breaks up on the strength of what they are witnessing, knowing that every time they looked into each other’s eyes from now on, somewhere in their head would be Chav Dan, topless and rolling around in spilt beer on the ground. The night peters out, the daytime drinking has taken its toll and when everyone heads off to “the third bridge…or something”, I decide to call it a night. 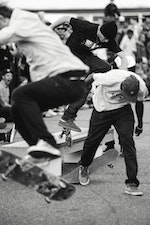 The Basque Country is a (slightly damp) concrete paradise and P-Stone made the most of it on a recent mission with Jake Collins, Julien Benoliel,...

"Fuck it, you know what will make this more fun to skate? A big fuck off fire,"

The Basque Country is a (slightly damp) concrete paradise and P-Stone made the most of it on a recent mission with Jake Collins, Julien Benoliel,...

"Fuck it, you know what will make this more fun to skate? A big fuck off fire,"