War of the Thistles 2018 Dumbarton Highlights

With us unable to get north of the border to attend this year’s War of the Thistles, we’ve had to leave coverage in the capable hands of others for 2018. With Cameron Stuart covering the Aberdeen highlights at Transition Extreme ably, we can now offer up the highlights from the second day at Unit 23 in Dumbarton courtesy of Sixth Sense Images. As usual the event went off, with southern visitors Alex Hallford, Eddie Belvedere and Jordan Sharkey joining the expected turn out of the majority of the Scottish skate scene to get stuck into sessions at the two long serving indoor parks. Watching Jordan Sharkey’s nonchalant pisstakery on pretty much every obstacle in the park makes it crystal clear why he took home the prize on day two, while Alex Hallford’s transfer in the bowl which closes the curtains on this clip is nothing short of ridiculous.

Finals results stood with Alex Hallford taking the Day 1 WOTT title, and returning victor Jordan Sharkey bagging up Day 2 at Unit 23 in Dumbarton for the second year in a row. Winners photo courtesy of @skateboardscotland. 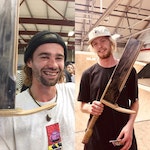 For an ongoing history book of the biggest event in the Scottish skateboarding calendar, peep the website War of the Thistles tag and kick yourself for not being there! Big up Ali Menzies and Skateboard Scotland for making this shit happen year in, year out, absolute bosses.

Tim Hines interviews Jordan Sharkey in the return of his now long running interview series, catching up with the Vans and Element rider out in...

After the strictly indoor, sheltering from blizzards theme that ran throughout episode 2, a slowly emerging spring has made filming The Streetys Are Ours Episode...