Tim Hines interviews Jordan Sharkey in the return of his now long running interview series, catching up with the Vans, Black Sheep and Element rider to talk his current living situation in Madrid, winning the Element Make It Count contest a couple of years ago, travelling to Hong Kong for Nick Richards’ most recent Nocturnup edit, the process by which he goes about filming and more.

Click on the words or image below to be taken through and see what Jordan is up to at the moment;

“I really like to film video parts cause your just out in the streets with the boys having a good time. I want to film them more than insta clips or skate comps but it’s all good fun I think. I don’t mind a comp sometimes, you meet people, party, skate a bit, they can be fun. And insta clips happen quite naturally now I’m in Madrid, skating everyday, someone gets hyped “oh I’ll film it”, cool. People should definitely film more video parts tho! [sic]” 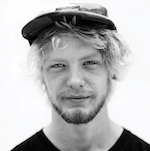 Jordan has been a solid fixture on screens and in the majority of large scale UK contests over the last couple of years (see War of the Thistles two years on the trot, taking the Dumbarton leg last year and getting the same leg this time around for good measure). Madrid is basically a massive skatepark and, despite talks of potentially criminalising skateboarding in the city, still offers enough scope for getting some in between its sprawling suburbs and gnarly skatepark options that we imagine his being there will result in a glut of Sharkey footage over the summer months. Keep your eyes out, and be sure to keep an eye on Tim Hines’ blog too now he’s back on the interview horse!

Full Blast: 20 years of Thrasher photography by Michael Burnett. Photos from the House of Vans exhibition and bowl session.

The Vans Shop Riot 2018 German leg will be taking place this weekend in North Brigade Skatepark, Cologne, kicking off the long running series which...

House of Vans will be hosting a Michael Burnett Thrasher Exhibition to celebrate the lensman's 20 year anniversary at the mag on June the 14th.