Where are they now? Vanishing Point: UK skaters MIA from 2000-2010
The first decade of the 21st century seemed to pass in the blink of an eye.

Companies came and went (some came back again…), shiny DVDs eventually replaced dusty VHS tapes, and careers came to ends whilst others began.

Over the course of the ten years between the millennium and 2010, UK skateboarding churned out its fair share of talent, some of which went on to become regular faces who are still out killing it today, but, traditionally, a lot of individuals who we’d become familiar with had sunk into home turf obscurity as the second decade of the 2000’s began.

With this in mind we present to you the first part of our ‘Vanishing Point’ series, which hopefully reminds you of some of the currently missing in action seven ply talent that came to the fore during the period of 2000 – 2010, and where possible, give you a bit of insight into where they are at now.

If there’s anyone you want to see included in part 2, get in touch! 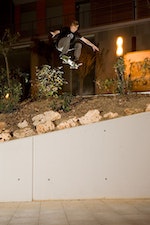 It’s no secret that we’re big Lovenskate fans over here – so, with Aaron Wilmot’s section and the Connoisseur of Quality clip whetting appetites over...