Remember when Eric Swisher AKA ‘Chops’ declared that he was going to stop updating his peerless online skateboarding archive enterprise The Chrome Ball Incident?
Yeah, I’m glad he fucked that off too – Chrome Ball is truly a gift to the skate community – archive photography from long lost magazines probably only owned by the likes of Chops, insights into many of skateboarding brightest and most influential and a window into an era of skateboarding’s culture when the concept of preserving the past was basically anathema.

With his latest post, the Shiloh Greathouse Chrome Ball interview, Chops ups the ante once again and sits down with one of the least celebrated of World Industries 90’s pro’s and a man about whom rumours have circulated for decades.

From riding for Tony Alva as a kid, growing up skating Lockwood with Guy Mariano, his time in jail and a bunch of stories relating to why he disappeared and why he never really achieved the status within the skate industry that his progressive and ground-breaking skateboarding deserved – it’s all here with no punches pulled.

When the intro to an interview starts with the following statement, you know you’re in for a treat:

So your Dad is a bodybuilder who built his own church, studies Egyptology, owns a time machine and wrote songs for Cameo? 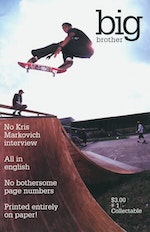 Given that we’ve waxed lyrical about Shiloh’s contribution to skateboarding and more so, his somewhat under appreciated progression (especially in the fields of early technical handrail skating), we’d be slipping if we didn’t also include a couple of his classic sections.

Here’s his inaugural full part from World Industries 1992 ‘Love Child‘ video.
Yep – that’s the first documented cab flip down stairs and the first ever bs 270 lip down a rail 26 years ago.

And then here’s his often overlooked 1993 follow up New World Order video part containing yet another technical first in the form of the switch fs bigspin lip, (or boardslide – go argue amongst yourselves) a mere 25 years ago.

Big salutes to Mr Greathouse and to Chrome Ball.

The Chrome Ball Incident continues it's always enjoyable series of interviews with a banger, as it catches up with big gap and stair innovator Jeremy...

Ronnie Creager on The Chrome Ball Incident talking about why he's no longer on Blind, benihanas, switch front tails on shrooms, LSD and more...