The House Skatepark will be hosting the Sheffield X Asira Al-Shamaliya Jam on Saturday March the 31st in order to raise funds for SkatePAL. The House will be twinned with the Asira Al-Shamaliya Skatepark and one of their first acts will be to head over to Palestine in mid April for a week to teach the local kids to skate in amongst the Nablus Cultural Festival.

The evening’s jam will be taking place from 8pm to 12am, costing a fiver on the door and with auctions of skate stuff (so far donated by Death, Keen, Rock Solid, Polar, Passport, Primitive, Grizzly, Wayward and SESH) taking place at around 9pm. Now you have all the necessary info squirreled away in your brain, make sure to get to this if you can and have a skate for a good cause – what more could you want? More info on both SkatePAL and the Asira Al-Shamaliya skatepark can be found below the flyer. 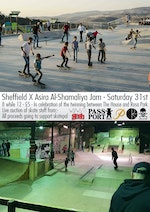 SkatePal is a non-profit organisation that works with communities throughout Palestine to enhance the lives of young people and promote the benefits of skateboarding.

Since 2013, our ongoing presence and award-winning projects have reached hundreds of young people across the West Bank and won acclaim and recognition from supporters around the world.

We are run by a committed team of local and international volunteers who, through teaching skate classes, building skateparks and providing equipment, are enabling an ever-growing number of Palestinian skaters to empower themselves and inspire the next generation of Palestinian youth.

‘Rosa Park’ is SkatePal’s second concrete skatepark in the West Bank, and the largest in the country.

Situated in the northern West Bank village of Asira Al-Shamaliya, the 700m2 concrete park was built by twenty international volunteers and completed in October 2015. All materials for the park were sourced locally in the village.

SkatePal is currently hosting weekly skateboarding lessons throughout the year and working to develop a sustainable skateboarding scene in the village and the surrounding district.

The park is a collaboration between SkatePal, The Palestinian House of Friendship and the Asira Al-Shamaliya Council.

skatepal The House the house skatepark